The last couple of posts concerned the Melrose YMCA in the remodeled Cincinnati Club building. In 1967 the old building was demolished to be replaced with a modest modern facility. During the construction the Black religious community in Walnut Hills returned the favor of space. As the Y had hosted the services of churches under construction in the neighborhood, the Metropolitan CME Church across the street hosted the closed branch’s annual fashion show fundraiser in October 1967. Lawrence Hawkins broke the first shovel full ground for the new building as a member of the branch board of management in June of 1967. Hawkins was a Black longtime neighborhood resident: a student at Douglass School in the 1920’s and a Tuskegee Airman during World War II, he served at the time as an assistant superintendent of the Cincinnati Public Schools. By the time the new building opened in 1969 Dr. Hawkins was on his way to becoming the first Black dean at the University of Cincinnati.

1967 was a time of great racial tension in Cincinnati and the country. It was the year of Race Riots in Avondale and Walnut Hills – I remember the National Guard vehicles stationed in the Sears parking lot on Reading Road; they did not make me feel safer. The half-century of disinvestment that followed is reflected in the decisions of the YMCA of Cincinnati and Hamilton County. The neglect of the 1960’s extended to all three of the old Negro branches.

Urban renewal and freeway construction destroyed much of the old West End including the Ninth Street YMCA, a flagship institution for the Black community downtown since the 1910’s. An area resident asked a newspaper help column about a new branch in the neighborhood.

“Here’s the answer, by Henry E. Grim, general secretary: ‘The old building was purchased by the city for the expressway system. Money received has been used to construct a new YMCA building at 2840 Melrose Ave., Walnut Hills. Because the Ninth Street Branch served primarily our Negro population, we felt it important that the funds be reinvested in an area occupied predominantly by Negro people. This decision has proved to be good, because the new branch is being well attended and is appreciated by the community.’”

The success in Walnut Hills was certainly valid, although only the building, not the branch, was new. Pettifogging rhetoric aside, the construction on Melrose did absolutely nothing for the West End.

The old Lockland Negro YMCA also closed. In the late 1950’s the organization purchased a school building from the city of Wyoming to house programs for the Black community working in the factories of the upper Mill Creek valley. That branch also serve youth in nearby Lincoln Heights, a community struggling for incorporation and Black self-government. A few years later Wyoming repurchased the building but leased the gym back to the Y. Yet in 1967 the Wyoming City Council summoned General Secretary Henry Grim and ordered the branch to move out owing to “incidents of locker pilfering and noisy crowds.” These conflicts – which Grim characterized as “racial” – and Wyoming’s harsh reaction struck at the heart of the Black community of industrial labor. A reporter raised the question, “What services will be provided for Lincoln Heights youths?” The news report announcing the closure in Wyoming claimed Grim “said the facilities will be replaced at a new building under construction on Melrose Avenue in Walnut Hills.” That is a bit unfair; he actually said “perhaps later on we can provide another facility in that area. For the present, however, we are concentrating our efforts to finish the Melrose branch. There are hundreds of Negro youngsters in that area that really need it.”

It is worth noting that in 1968 the Cincinnati and Hamilton County YMCA wrapped up a $1 million fund drive to build “two family branches in Blue Ash and Mt. Washington” – both white communities. Blue Ash, in fact, was only a couple of miles east of Lincoln Heights, incorporated in part to contain the geographical area of the Black village. Yet none of the rhetoric from the metropolitan Y suggested that youth from Lincoln Heights would be welcome at the new Blue Ash family branch. (Such YMCA patrons would have been more likely to suffer than cause “racial incidents” in the nearby white community.) It is also worth noting that the Melrose facility with strong inter-generational mentoring and programming was too small to be worthy of the “Family Branch” designation.

Thus, the destruction of the three Black branches in 1967 had a single solution at no cost to the metropolitan Y and its board and fund raisers. The proceeds from the sale of the West End Branch – which had been funded for and largely by the Black community that supported it for 50 years – went to constructing a new building at the site of the Walnut Hills branch on Melrose. It was disingenuous of the metropolitan Y to characterize this as a “new” branch. In 1966 there had been three branches serving the Black community; in 1969 there was only one. There were no arrangements to provide services from the Melrose branch either downtown or in Lincoln Heights. While explicit segregation at the Williams Y on McMillan in Walnut Hills had ended – there were Black boys in programs there by the late 1960’s – the Melrose branch remained as a separate and far from equal facility. The Blue Ash facility was undoubtedly more segregated de facto even than the Williams. 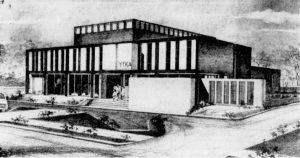 Despite the neglect of the white power structure, the African-American community in Walnut Hills did get a utilitarian facility on Melrose with a gym, meeting rooms and an indoor swimming pool – a new amenity. There was also an outdoor children’s pool. Even with the funding from the Ninth Street buildings, the branch required sixty donors each provided a hundred dollars or more to a fund “making possible the purchase of needed equipment to be used by youth in the Walnut Hills area.”

The new building played the same sort of role in African-American Walnut Hills as the old one had done for twenty years. It hosted receptions for organizations like Valiant Ladies Federated Club and the Buenos El Amigos Federated Club and the Willing Workers Guild (all affiliated with the Federation of Colored Women’s Clubs, headquartered at 1010 Chapel), and the Corinthian Chapter and the Elisha Chapter of the Order of the Eastern Star. Community Service Programs reflected the changing nature of racial tensions; examples include a program in 1969 on “gyps, frauds and ‘truth in lending’” by the Better Business Bureau and the Legal Aids Society, or a discussion of “Police-Community Relations” sponsored by the Cincinnati Police Department and the National Conference of Christians and Jews in 1971.

The most consistent fund-raisers provided for youth programs. The Y had kids clearing out old glass bottles with their wooden boxes to earn the bottle refunds to pay for summer camp. Fetes and fashion shows supported youth bus trips to Washington DC and California. Clubs and civic organizations paid for swimming lessons and sports leagues for neighborhood children. In 1987 the thirtieth annual fall tea raised more than $3000: “Some children cannot afford to pay and this will help defray the cost. These are character-building programs.” Most important of all for the kids was the mentoring from the adult members of the Melrose Y.

You might also be interested in Melrose YMCA Development and Programming or the older building, Walnut Hills (Melrose) YMCA .