In 1944, the Cincinnati and Hamilton County YMCA established the Walnut Hills branch, a Black alternative to the segregated Williams YMCA on McMillan. Initially the branch operated the existing Nash Recreation Center at Mt. Zion AME Church. Within a few years the programs had more than 1700 participants and required more space. The citywide YMCA bought the old Cincinnati Club building at 2840 Melrose from the DAV for just over $36,000 in 1946. News reports in 1947 included the Melrose renovation as part of a major national YMCA construction program to begin when construction prices stabilized as the war economy phased out. The Black Y in Walnut Hills began raising money for the city’s “third clubhouse dedicated to advancement of Negro youths and adults.” The Walnut Hills Branch, like the white Williams Y, served women and girls as well as men and boys.

The Cincinnati Y said, “the project, started in 1943, represented an investment of $125,000 and was the best-equipped ‘Y’ building in Cincinnati.” Apart from the purchase price there would have been something like $90,000. The local board raised $10,000, and it seems the first year’s membership fees of $6,000 were rolled into the initial cost.  Opening ceremony rhetoric aside, the total amount invested in the purchase, renovation, equipment and furnishings — as opposed to operations since 1943 — may have been considerably smaller. It seems unlikely that the sort of substantial gifts required to fill a $75,000 gap would have left some traces. (At any rate the Northeastern Branch in Norwood, a joint project with YWCA, had a budget of $250,000 before adding a swimming pool. The renovated Walnut Hills Y on Melrose did not get a swimming pool for twenty years.) 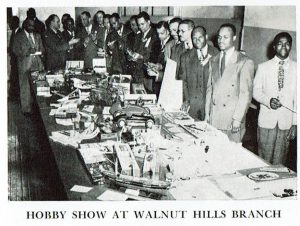 Whatever the true cost, the Melrose building had three lounges, a dining room, clubrooms and game rooms, an auditorium, a gym with locker rooms, and showers. A YMCA history in 1953 noted that the “Branch is situated in a region which has the second largest Negro population I the city. It meets a great need because, in the Walnut Hills and South Avondale area, the opportunities for wholesome recreation are relatively few.”

The Melrose Y provided not only wholesome recreation, but wholesome opportunities for Black leadership in the changing Walnut Hills community. The original executive secretary in the new building, John H. Bell, came from the Black downtown Ninth Street YMCA. All who served as the branch executive were African Americans, generally college educated and frequently veterans of Black Y’s around the country. Moreover, the branch offered leadership training programs for both youth and adult participants in its programs.

William Lovelace, a Mississippi native and a graduate of the Historically Black Knoxville College, came to Cincinnati in the early 1920’s to serve as the Boys Work Secretary at the Ninth Street YMCA downtown. There he encountered Horace Sudduth, a wealthy African-American real estate agent and broker who worked in both the West End and Walnut Hills. Sudduth was a major player in the national Black YMCA movement as well as the long-time chair of the board of management at the Ninth Street Y. While Lovelace ran the Boys Program downtown, he attended the YMCA-run Salmon Chase Law School. After graduating and passing the bar exam he went into private practice and moved to Chapel Street in Walnut Hills. Lovelace chaired the “Interracial Committee of Management” that began the Walnut Hills YMCA operations in 1944. Once the Melrose site opened, he became the Chair of the Branch Management Committee. (Lovelace would run unsuccessfully for City Council in the late ‘50’s and would be appointed and then elected as Cincinnati’s first African American municipal judge in the mid ‘60’s.)  It seems that Lovelace built his own board, undoubtedly with help from Sudduth.

One of the major programs at the new branch also served as an early fundraising tool: Walnut Hills Y boxers took on other amateurs in many bouts at the Parkway Arena on Central Parkway in the old West End. Ticket revenues went to buy equipment for the athletic program at the Walnut Hills Y. The bouts continued from 1947, when the cards included up to 30 fights, through the 1960’s at least. A high point came in 1959, when

Clay would of course take the Muslim name Mohammed Ali as he emerged as “The Greatest” in boxing.

The Walnut Hills YMCA also served as a venue for social activities and meetings for other Walnut Hills organizations. Some examples include Fred Shuttlesworth’s Greater New Light Baptist Church before it acquired a building, and Antioch Baptist Church as it moved and competed a new building, and for a time Brown Chapel AME as it completed the Sanctuary across Alms Place from the old Douglass School. Various Black social service agencies using the Y for a fundraising venue including the Auxiliary to the Home for Aged Colored Women, and the Council of Negro Women. There were fashion shows and charm schools for neighborhood girls and women, often arranged as fundraisers for kids’ activities.

The building on Melrose quickly became a community center. YMCA programs included a preschool nursery every day; clubs, sports and athletic teams for children and adults; and a choral group. The Y sponsored its own annual festivals and teas, dinners and retreats, and a social club that organized activities like Ohio River cruises for families and (later in the evening) for adults. Above all, it became a place of community and mentoring: those clubrooms and lounges became a village to raise up the girls and boys and young adults in the African American community in Walnut Hills. Young folk nurtured there play leading roles in the community to this day.

You might also be interested in Melrose “New” YMCA building, 1967 and the older building, Walnut Hills (Melrose) YMCA. On the Black Ninth St YMCA downtown, Horace Sudduth’s Charitable Work during the 1910s.

It is also notable that the YMCA and YWCA joined together to build a new facility in Norwood, also about 1000 members, with a budget of $250,000. That project had the backing of bankers and industrialists with plants in Norwood and Oakley. The Cincinnati Enquirer (Cincinnati, Ohio) 1 Jun 1945, p. 9

On uses by other organizations: For Shuttlesworth see the Cincinnati Museum Center. See the Brown Chapel website.