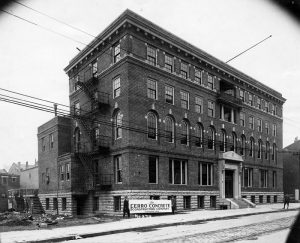 In the previous post we looked at Horace Sudduth’s business dealings in the West End during the 1910’s. We also noted that the Lincoln Theater, a Vaudeville and Moving Picture house, offered some free lectures and religious films – perhaps to make the Black Middle Class comfortable in the building. That was positive for the neighborhood, to be sure, but it was a marketing strategy rather than a charitable contribution.

Sudduth worked on another project during those early West End years, one in which he persisted for the rest of his life. He sat on the Board of Management at the Ninth Street YMCA, the first “colored” branch in the city, from its opening in 1916 for 35 years. The story of its foundation is a classic tale of the confused Progressive Era in Cincinnati and the country. The YMCA nationally grew by leaps and bounds in the 1910s and ‘20s. It mostly represented a segregated white organization moving from religious and physical culture into social service work. In 1910 the national headquarters solicited a contribution from Sears president Julius Rosenwald for a large (white) branch in Chicago. Rosenwald, a Jew attuned to white Christian prejudices, made a counteroffer. He agreed to provide seed money of $25,000 in any city that provided an additional $75,000 in local funding for a Colored YMCA. Half-a-dozen municipalities responded right away; between 1911 and 1933 Rosenwald paid out more than $600,000 to initiate 25 Black YMCAs.

Mrs. D. B. Meacham, wife of the wealthy Cincinnati YMCA president, committed the first $25,000 in Cincinnati. She persuaded Walnut Hills resident Mary Emery to issue another challenge: Emery would donate $25,000 if the Cincinnati Black community could raise $15,000. The Cincinnati YMCA board promised, if all the contingencies were met, it would raise $35,000 to complete the building fund and the provide first year’s operating budget. The national YMCA organization arrived with its already formidable grass roots fundraising scheme. Sudduth’s Black partners in the Home Building & Improvement Company were invited to the first meeting; the Y recruited fundraising “captains” and each captain formed a team of 10 men. They hung a “clock” showing $15,000 on a temporary Black Y building, and officially launched the campaign in the Black community in May 1913, with a deadline of June 10. On June 7, a headline in a white paper read: “Let Hands of Clock Complete Circuit for Second Time;” on the closing day the headline read, “$27,778.40 Raised by Colored People for New Y. M. C. A.” 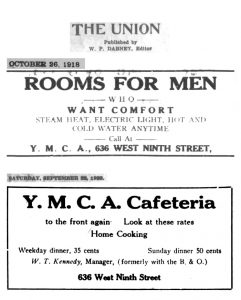 In addition to gymnasiums, a swimming pool, locker rooms and showers for members, the branch included comfortable lobbies for men and boys, meeting rooms, a billiard hall, a cafeteria, and dormitories. For the tenants, the Y operated like a residential hotel. The dormitories opened just as the Great Migration of southern Blacks to the industrial north gathered steam. Residents included lots of graduates of historically Black colleges in the south, men who migrated north to enter the professional ranks – and in many cases moved in the 1920s and ‘30s to Walnut Hills. The Alpha Phi Alpha fraternity was the premier organization for collegiate African American men; its members offer an indication of the crucial role the Ninth Street YMCA played in the Black elite in Cincinnati. Many brothers who ended up in Cincinnati, no matter what their original affiliations, appeared in the alumni reports of the Alpha Alpha chapter at the University of Cincinnati. In 1922 the chapter listed the names and (in one issue) addresses for its 21 members. Seven of them, a full third, lived at the same address: 636 W. Ninth St., the location of the Colored YMCA!

The Y was a place for these up-and-coming men to establish themselves in Cincinnati. Their number in 1922 included the chapter secretary Charles E. Dillard, a Meharry Medical College (Nashville) MD who practiced in the West End but would a few years later make his home in Walnut Hills. (His son, Dr. Charles O. Dillard, would follow him to Meharry, and Alpha Phi Alpha, and practiced for many years in Walnut Hills.) Most issues of the alumni magazine listed the addresses of only the president and vice president of the chapter. In 1923 YMCA residents H. T. Miller and F. T. Layton filled those positions, and maintained them, along with their rooms at the Y, through 1925. The next president, William Lovelace, also took a room at the Y as he began his term; he arrived in our city to lead to the branch’s department of Boys Work. Lovelace would move to Walnut Hills in the late 1920s. He earned a law degree from the Central Avenue YMCA law school; in 1965 he became the first Black municipal judge in Hamilton County.

To turn for a moment to earlier posts, and to Sudduth’s first job, I think of the residents of the Ninth Street YMCA as a little like the Pullman Porters around the same time. In their double dormitory rooms with congregate bathrooms, these college and even professional school graduates, often refugees from the Jim Crow South, formed a brotherhood of elite leadership in the Y’s West End neighborhood. Like the porters, they understood one another and while they occupied nearly the lowest rung of economic ladder in mainstream society, they were rising to the top of their own communities. The Y offered a place of dignity and an incubator for business and professional networking.