Proponents offered clean water as one of the early promises of the Reservoir at Eden Park. The huge artificial lake held a hundred million gallons – a couple of weeks’ supply for the city. And the reservoir did clean the river water considerably, just by letting it sit.  By the late nineteenth century, however, the science of water quality had advanced to the point that water treatment plants had three objectives: removal of dirt, consideration of chemistry, and extermination of bacteria.

To the modern mind, thoroughly convinced of the germ theory of disease, biological contamination is the most obvious form of sickness from water. It’s a little startling to learn how late this idea informed the treatment of the Cincinnati water supply. The most virulent water-borne disease in the nineteenth century, cholera, stuck Cincinnati (and many other large American cities) in three waves. The first came in 1833-1834; the second in 1849, and the third in 1866. None of these, nor even a smaller outbreak in 1877, struck the Cincinnati Public Health Department as a water purity problem. 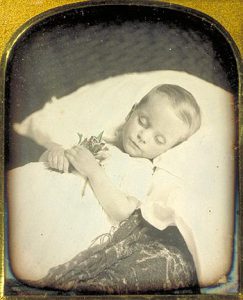 Charlie Stowe, photographed after his death from cholera

To make cholera into a Walnut Hills story, the 1834 epidemic had devastating effects in the Kemper family, taking both the patriarch, the Rev. James Kemper, and his son Elnathan. At the new Lane seminary built on land in the neighborhood donated by James and Elnathan, both President Lyman Beecher and Professor Calvin Stowe lost their wives to that epidemic. Lyman Beecher was widowed for the second time. One of Beecher’s daughters by his first wife, close friends with Calvin’s deceased wife Eliza, married Calvin to become Harriet Beecher Stowe.  Tragedy struck the Lane neighborhood again in 1849, when Calvin and Harriet Beecher Stowe lost their son Charlie, as well as their Black washerwoman “Aunt Frankie” to cholera. Armchair epidemiology would have it that Aunt Frankie contracted the disease through her work, and that her infection spread to Charlie.

Cholera is an intestinal disease that spreads by contaminating drinking water with the feces of victims.  It’s worth noting that in 1834, the Black Cincinnati businessman Henry Boyd recommended boiling water before dinking it to stop the spread of cholera. More conventional medical wisdom attributed the disease to a “miasma” – foul air – caused by the accumulation of filth. (The Cincinnati folk hero Dr. Daniel Drake, for example, embraced the miasma theory.) Only careful epidemiological studies by John Snow in 1854 in London pinpointed the source of an outbreak of the disease to a specific well, pointing to a water-borne cause. Like many breakthroughs in science, Snow’s results were generally discounted until a larger London cholera outbreak in 1866, tracked by a more sophisticated statistical analysis, convinced most public health practitioners in England of the probability of Snow’s analysis. Louis Pasteur in France and Robert Koch in Germany were working out a germ theory of disease during the same period.

Despite the purchase of the Markley farm site 10 miles upriver in 1872 and the frequent urgings from the Water Works to draw water from that site, the city continued to draw water from Front Street, near the east end of the city in the basin. The reason for rejecting plans for a new water intake plant in the suburb of California always boiled down to money. Yet the water quality at the Front Street plant deteriorated as time moved on. Ironically, improving management of human and animal waste increased the load in the Eggleston Avenue (Deer Creek) Sewer just downstream from the Front Street intake. Added to this intermittent source from the Deer Creek Eddy, sewage from an increasing population in the eastern suburbs provided constant and growing contamination from upstream.

The Cincinnati Public Health department, aware that sewage was linked to disease – especially in crowed tenement districts – concerned itself mostly with “the miasmic and noisome exhalations” from open sewers “breeding disease.” Sewer gasses do in fact represent a significant health risk, and the presence of open sewers is likely to contaminate drinking water, so the Health Department’s concern with sewerage – the infrastructure of sewers — had many benefits. The management of sewage went hand in hand with cleaner water in nineteenth century public health.  Yet as late as 1879 the Cincinnati Department of Health report attributed both an epidemic of “cholera infantum” in 1877, and annual outbreaks of typhus to airborne gasses. Both diseases are now understood to result from impure water.

On the cholera deaths of James and Elnathan Kemper, see the records of their reburials in Spring Grave Cemetery, James and Elanthan.

For a contemporary account of the 1866 cholera epidemic, see Orin Newton, Essay on Asiatic Cholera (Cincinnati, 1867)