In 1867, Cincinnati began construction of the new reservoir in Eden Park, Walnut Hills, to provide a generous, high-pressure supply of water to the residents and businesses in the city’s basin. Yet the established community in Mt. Auburn, and the scattered residents of Walnut Hills south of McMillan Street around the Episcopal Church of the Advent and the original Catholic St. Francis, lived at a higher elevation than the Eden Park reservoir. Since water flows down hill, the installation of the effluent from the reservoir pipes did not provide for the needs on the bluffs. The two wealthy suburbs named, south of McMillan, were part of the city from about 1850; in 1869 the city and the “Special Road District” of Walnut Hills and Coryville agreed to the annexation of the district north of McMillan. The suburb of Walnut Hills – home of Lane Seminary since about 1830, a little business district around what would became Peebles Corner, the Black community around First Baptist Church and Brown Temple AME – would also need water from a more elevated source. Moreover, owing to the success of Eden Park and other infrastructure including the white and Colored Schools in Walnut Hills as well as new roads and the paving of old ones, the thirsty population boomed. 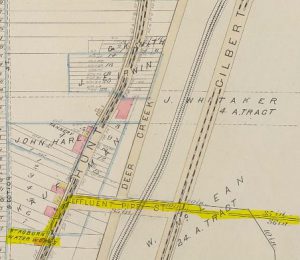 In 1867, the Water Works Board “instructed the superintendent and hydraulic engineer to select sites for a reservoir and engine-house to supply Mount Auburn, Walnut Hills and other high grounds, with water.” As soon as the construction of the Eden Park Reservoir began, the Water Works initiated the concurrent construction of another, higher reservoir to supply water to the neighborhoods that grew up above the reservoir in Eden Park. Unlike the stone reservoirs downtown and in the new park, the Mt. Auburn reservoir was a large iron cylinder, supplemented over the years with two more. (Like many later Cincinnati Reservoirs at high elevations it would eventually clad in stone to provide an architectural rather than an industrial look.) The large tank was sited in the triangle formed by McMillan Street on the South, Auburn Avenue on the East, and Vine Street on the West.

The engine house required to deliver water to the Mt Auburn Reservoir was even closer to Walnut Hills. On the west side of Hunt Street (now Reading Road) just north of Liberty Street the Waterworks built a holding tank and a pump operated by a large steam engine. The plan all along had the Mt. Auburn reservoir supplied from the effluent pipe from the huge Eden Park project, but the urgency on the bluffs (hydraulic and political) caused a temporary fix drawing water from the downtown mains fed by the reservoir on Third Street. This expedient diminished the availability and quality of water in the city basin. 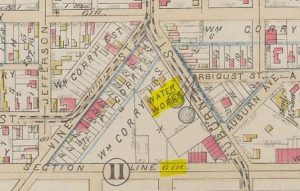 Maps from 1883-1884 show the tanks (by that time, two of them, still unimproved iron) in the “Mt. Auburn triangle” – more or less the location of today’s Kroger/Walgreen parking lot. McMillan Street is labelled here as the “Section Line”, covering a 6-inch water pipe toward Walnut Hills. The second figure shows the location of the Hunt Street pumping station labelled Mt. Auburn Water Works. Hunt Street is now Reading Road; Effluent Pipe Street is Elsinore Place. Note the two pipes labelled 35 and 36 inches from the east; these emerged from the Effluent Pipe Tunnel. The 35 inch pipe continued to the Hunt Street pumping station. Note that you may need to click on the lower image to see the detail at the bottom.

You can find the 1884 maps at the Cincinnati Public Library website
Look for plates 12 and 17.