The Eden Park Reservoir Project began in 1866 with the construction of huge retaining walls to support the reservoir. A second front was opened in order to bring water from the river to the reservoir — the “influent pipe”. The Water Works had since the 1820’s pumped its supply from the Ohio River just upstream from the outlet of Deer Creek. Deer Creek, often a dry gully that swelled with water after rain, ran down from two branches along what are now more or less Reading Road and I-71 to the West, and Florence Avenue to the east, merging and running down what is now Eggleston Avenue. Through the 1850’s the Deer Creek valley was the home to most of the slaughterhouses in Cincinnati’s thriving pork packing industry and their runoff – hardly the location, even in nineteenth-century minds, for a source of drinking water. The most famous demonstration of this fact came when a fire at a distillery dumped a huge amount of whiskey into the creek, which contaminated (or according to some wags enhanced) the drinking water throughout the city for a couple of days. Nonetheless, the installed infrastructure in place overrode expert recommendations and common sense, leaving the intake in what was recognized as an eddy in the river caused by flow from Deer Creek. (Within a few years the Water Works built a longer intake pipe to draw water farther from the Cincinnati shore, but fifty years would pass before the intake moved upstream.) 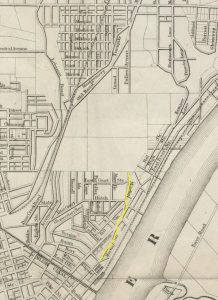 The location of the pumps and of the reservoir posed the engineering problem of how to get the water from the pumps to the reservoir. The shortest distance between two points is of course a straight line; on an 1861 map that straight line fell more or less along Martin Street, which skirted the eastern edge of Mt. Adams from just below the Third Street reservoir up to what was then then extreme end of Court Street, now Parkside Place along the border between Mt. Adams and Eden Park. (The lower part of Martin Street has disappeared under Columbia Parkway, but the upper part is still accessible from the Parkway heading east out of downtown on a right exit that at first seems to be a bridge to nowhere before crossing back over the Parkway. Continuing up the hill, Martin still goes by the old wall of the abandoned lower reservoir.)

In three dimensions Martin street did not represent anything like a straight line. On the 1861 map it cuts a diagonal line from the river below the Third Street Reservoir to the Longworth Garden of Eden, but the terrain was rough. In 1868, as construction of the Reservoir Wall was progressing quickly, the City Council passed an ordinance to grade Martin up to about what is now Parkside Place, but it seems the work didn’t get started for some time. In June 1872 a new ordinance was referred to the council to establish the grade for Martin Street all the way from Third Street downtown to what was then called East Court Street at the border of the Park:
“commencing at the intersection of the north curb of East Third street with the north west curb of Martin street at the level of 129 feet above low water in the Ohio River; thence northwardly with the west curb of Martin Street at an ascending grade of nine feet in each 100 feet for a distance of 200 feet (9 in 100 for 200) to the southwest curb of Martin and Hill Streets and level of 147 feet; thence northwardly with the west curb of Martine Street at an ascending grade of six feet in each 100 for a distance of seven hundred feet (6 in 100 for 700) to the level of 189 feet”
and so on upward at gentler slopes for another 3000 horizontal feet to the south curb of East Court Street at 195 feet above low water, and then gently downward for a few hundred more feet to the Reservoir.

Underneath this newly graded street, the Water Works required the contractor to lay something over 3500 feet of 40-inch diameter cast iron pipe with walls between 1 ¼ and 2 inches thick – the total weight coming in at about a thousand tons and the cost at more than $55,000. At a point when other scandals and cost overruns overtook the reservoir project in 1875 this pipe became a cause célèbre; it seems it had been ordered by the city of St. Louis and rejected because the pipe walls exhibited too much variation in thickness. To add insult to injury, Cincinnati ended up paying more than the St. Louis contract had specified. In the event, despite an initial report of a leak in a Martin Street sewer, the pipe served its purpose. 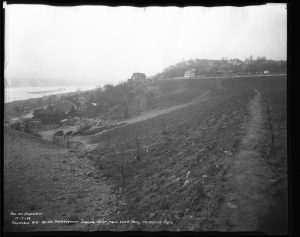 By the summer of 1873, it seemed, “now the grading of Martin street is the hobgoblin that darkens our prospect of speedily obtaining a supply of water from the new reservoir in Eden.” Delays at the Resevoir proven more prolonged, so that Martin Street and the massive “influent pipe” were ready long before the reservoir in the fall of 1874. We have already noted that leaks in the reservoir in late 1874 halted pumping from the river and left standing water in the more than half-mile of cast iron pipe, leading to fears that the water might freeze and burst its container. For once, the project caught a break, and the pipe, uneven and condemned as it was, survived to serve until the construction of a new pumping station 40 years later.

A photograph from 1938 from the lower Reservoir wall to document the construction of Columbia Parkway shows the straight path of Martin street above the fill below the Reservoir.

The map appears in the William’s Cincinnati Directory for 1861.