The saga of the connection of the reservoir in Eden Park to the downtown water mains and the Hunt Street Pumping station dragged out from 1867 until 1883. Huge valves to connect the effluent (outflowing) pipes from the tunnel through Walnut Hills constituted the final piece of the puzzle. Fittingly, the Valve House served as a capstone of four major construction projects on the cusp between Reconstruction and the Gilded Age: The Reservoir, Gilbert Avenue, Eden Park, and the Cincinnati Art Museum. The Water Works created what is known as the Elsinore Gate, perhaps the most iconic architectural folly in the city. 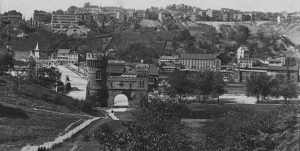 The first photograph, unusual since it is taken from the hill in Eden Park, shows the “back side” of the gate, providing insight into the business end of the hydraulics. The photo dates from 1900, showing a vastly developed Mt. Auburn on the hill above the opposite side of the Deer Creek Valley. Gilbert Avenue, the road passing from left to right in front of the arch, can be seen heading up the hill to the right; the steep grassy slope in the foreground at the left conceals the Avenue’s descent toward downtown. Underneath Gilbert Avenue the 36-inch effluent pipe carried water to the city basin. Elsinore Place, the road across the Deer Creek valley at a slight angle to the left of the gate, originally carried the 35-inch pipe from the reservoir to the Hunt Street pumping station. (By 1900, the water from that pipe was diverted to add capacity to the 36-inch pipe that supplied water downtown; we shall see that an alternative method of raising water to the suburbs on the bluffs came along in the early 1890’s.) 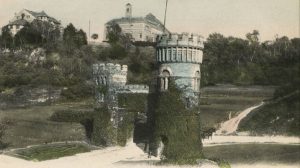 The second photograph from the more conventional “front side” of the gate gives a better sense of the alteration of the topography required to straighten out the path of Gilbert Avenue, scarcely visible at the bottom of the postcard. Elsinore sits in what was originally a ravine between Mt. Adams and Walnut Hills. The team of horses emerging from behind the right tower were about to begin the long pull to the road on the right up what is now Elsinore Avenue to Mt. Adams. At the top of the bluff to the left are the original buildings of the Cincinnati Art Museum and the Art Academy, constructed a few years after the arch. Between that bluff and the steep Mt Adams hill on the right, we can see gently graded and terraced fill. The elimination of the steep ravine with thousands of yards of rock and soil – a tiny fraction of the material used to provide the flat bottoms of the reservoirs on the other side of the hill – burrowing 185 feet through the new slope to the Effluent Pipe Tunnel completed a decade earlier. This topographical change covered and stabilized the connections to the straight, gently inclined pipe down Gilbert Avenue to the mains in the basin and to the Hunt Street pumping station. The excavation to Gilbert Avenue performed by the water works allowed the cultivation of a bowl-shaped lawn with plantings on each terrace characteristic of the early years of Eden Park. (Other hand-colored images show the plantings emerging from behind the towers as brilliantly-colored flowers, but this card’s single green speaks to the economics of color printing.)

The Water Works report for 1883 quoted a letter that requested “that work be resumed on Effluent Pipe Tunnel, that it be completed as originally designed, and that its terminus at Gilbert Avenue be finished as an ornamental gate-way, to be constructed of hill limestone. The cost will be about fifteen thousand dollars.” On completion later in the year, this ornamental gateway was described as “a tower-like structure of medieval design, which is intended to be utilized as a valve-house, and also as an additional entrance to the park grounds.” The complicated path from the first statement to the second is a quintessential Cincinnati tale. 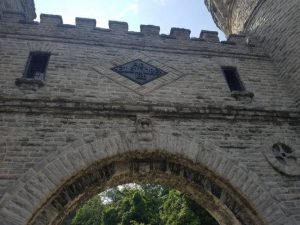 The contract for the design of the ornamental gateway in 1883 went to Samuel Hannaford, one of the city’s most famous and prolific architects. (This blog has previously introduced Hannaford as the architect of the two schools constructed by the Cincinnati Board of Education in Walnut Hills – the white Twenty-second District School and the Elm Street Colored School, both constructed in 1872.) When Hannaford received the Water Works commission in 1883 he was fresh off the 1877 completion of Music Hall, seen as his first great masterpiece. The Queen City of the West was approaching the height of its self-consciousness as a center of art and refinement. Music Hall was constructed primary to serve as a venue for a series of Industrial Expositions aimed at solidifying the City’s place as a center of manufacture and commerce. In matters of culture, the infrequently used space did feature a May Festival of music every other year. It also served for a half a decade as a nascent gallery for the decorative arts, sponsored by arts organizations piloted by the Women’s Art Museum Association of Cincinnati and modelled on the Victoria and Albert Museum. During the Spring of 1883 Music Hall provided a bit too cavernous a venue for a six-day dramatic extravaganza for the city, featuring the works of (who else but?) William Shakespeare. 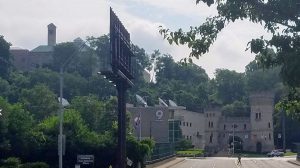 All this Arts stuff somehow came together around the Water Works space in Eden Park. Inspired by the Woman’s art collections, the Art Museum and Art Academy buildings at the top of the bluff in the second picture in the previous post had been commissioned to architect James McLaughlin. Those Richardsonian Romanesque buildings required considerable time to fund and engineer and construct; they were not completed until 1886 and 1887 but McLaughlin’s plans were well known when Hannaford got his Valve House commission in 1883. 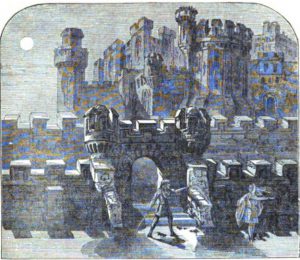 The stories go that someone – some accounts say Hannaford, others say officials from the Water Works – attended a performance of “Shakespeare’s Hamlet, as presented in Music Hall, at the First Dramatic Festival.” The young Prince was played by the nationally famous Shakespearian actor James Murdoch – a man with Cincinnati connections who had specialized in role for some forty or fifty years. The set in Music Hall included a huge painting of the stage designer’s image of Hamlet’s castle in Elsinore, Denmark. The lavish program included an engraving of the scene. Hannaford got (or was given) the inspiration for his Valve House design from the oversized painting behind the superannuated actor. Drawn and constructed around the massive valving using the native limestone readily available from the Water Works quarry, the folly with its brass plaques declaring “Elsinore AD 1883” went from concept to completion in just a few months.

The postcard of terraces is at the Cincinnati Public Library

Another lantern slice showing the ravine more clearly, not displayed here, is also at the Cincinnati Public Library

For a standard variation on the Hamlet story, see Cincinnati; a guide to the queen city and its neighbors. Compiled by workers of the Writer’s program of the Work projects administration in the state of Ohio. Sponsored by the city of Cincinnati, Ohio. p. 269

The best source is the original program: Shakespeare’s tragedy of Hamlet : in five acts, as performed at the Cincinnati Dramatic Festival, Music Hall, Friday evening, May 4, 1883