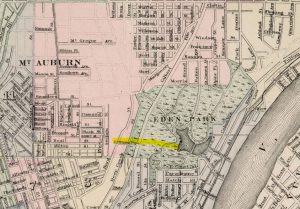 Walnut Hills, behind Mt Adams as seen from downtown Cincinnati, faces the Ohio River on one side and the Deer Creek ravine down to the city in the basin on the other. The new Eden Park reservoir, with the first half filled in 1875, lay on the river side, convenient for pumping water in from the river. To get to the consumers downtown and in Over the Rhine, the water needed to arrive at the other side of Walnut Hills, roughly a quarter mile away. This presented a new engineering challenge, perhaps more daunting than laying the 3500 feet of 40-inch pipe up the newly graded Martin Street. Not surprisingly the solution to the engineering problem lay in a tunnel.

“The outlet for effluent pipes was made by tunneling through the hill. The structure is made of four courses of brick and cement, is 12 ft diameter and 1,100 feet long and cost $73,000.” An engineer named Charles Boeckh took charge of the project in 1871. In January 1875, at a time when the supposedly completed upper reservoir was leaking what little water had been pumped into it, Boeckh gave rather uncomfortable testimony to the Board of the Water Works.

“I can say that the only work which was intrusted to me entirely, and which I accomplished against great difficulties with the best success, was the effluent tunnel from the upper reservoir to Deer Creek. The testimony of engineers and the general option of experts pronounce this tunnel in engineering and workmanship excellent and solid, and its present good condition speaks for itself. In every branch of my various duties I always gave entire satisfaction … I devoted my whole time to my work.”

Boechk’s testimony apparently convinced his superiors; after a house-cleaning in the upper management of the water works he was appointed hydraulic engineer. Yet the connection of the Eden Park reservoir to the downtown water pipes awaited further construction. Not until 1877 did the upper reservoir begin to feed the existing water mains. Two cast iron pipes, 35 and 36 inches in diameter, would carry the water from the reservoir to the Deer Creek Valley on the other side of Walnut Hills. The road graded to cover the tunnel across Deer Creek was given the mellifluous name “Effluent Pipe Street.”

Before we turn to the connection of the effluent pipes, we will need to take a brief excursion from the other side of Deer Creek to Mt. Auburn, a part of the city higher on the hills than the reservoir in Eden Park, to understand the use for the second pipe. Stay tuned for that post.

As a side note, the next significant mention of Boechk’s tunnel comes in an article more than 125 year later: in 2006, there is a report that an Indianapolis company removed the two old cast iron pipes and replaced them with a single 54-inch prestressed concrete water main. The project was completed on time. The report notes, “Some of the interesting issues involved with the project were the significant amounts of groundwater, the existing manhole abandonment, as well as the rail system installation all within the confines of an aged, deep tunnel.”

The illustration is from Frank Gray, New Map of Cincinnati, 1877

For an early reference to the tunnel, see Maxwell, Sidney D., The suburbs of Cincinnati : sketches, historical and descriptive (Cincinnati, 1870) p. 154

For more on the completion and costs of the tunnel, see Report of the Water Department of the City of Cincinnati for the year ending December 31, 1883, pp 9-10 and The Cincinnati Enquirer (Cincinnati, Ohio) 22 Jan 1875, Page 7

On the 2006 replacement of the pipes, see Eden Park Feeder Replacement