The major features of Eden Park emerged, at least in planning form, even before the completion of the reservoir. Apart from heroic efforts at landscaping the Eden Park with broad lawns overlooking the Reservoir, early visions also called for a circumferential path around the grounds, open to carriages and riders on horseback. These drives were to lie within the park, with green space outside separating the recreational paths from the increasing traffic and busyness of the exploding suburbs. Like so much of the history of the Cincinnati Parks and Parkways, this Eden Park circumferential route hung on through radically different administrations and administrative systems. Also like so much else, it was never really all in place at once; it left traces, mostly in the form of arched bridges, at many places in the park. 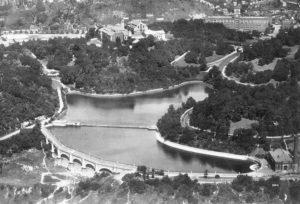 The first segment of the road was the twenty-foot-wide stone carriageway built by the Water Works atop the exposed wall of the reservoir, at the lower left end of the reservoir in an aerial photo from the 1920’s or early ‘30’s. The fifty-five-foot elliptical arches resting on pilasters apparently supporting the road caused great controversy in 1883 when it was disclosed that the Water Works chose to make these embellishments from attractive, longer lasting but more expensive Dayton Limestone rather than from the locally quarried stone used to build the actual reservoir walls concealed by the decorations. (The Dayton Stone certainly has weathered more gracefully than the limestone Elsinore Arch built on Gilbert Avenue at the same time.)

Another arch, resting on pilasters, appeared almost immediately as a bridge to nowhere over the main entrance to the Park from Gilbert Avenue. That entrance road, Eden Park Drive, approached the upper right branch of the reservoir in the picture, and disappears behind the pilastered and arched bridge. Constructed as a segment of the planned circumferential route, the approaches to the bridge were just grassy areas; its main purpose seems to have been as an observation deck for the beautiful view over the reservoir, show in a previous post. As it turned out, the bridge was propitiously located for the purposes of a horse-drawn street railway we will encounter in a future post – although it was not high enough to meet the tracks on the Art Museum hill at the left and the hill between the Drive and Morris Street, the northern boundary of the Park at Gilbert. 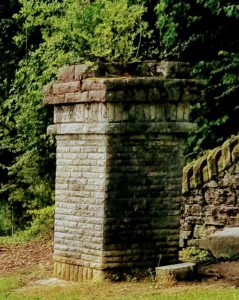 In 1875, Cincinnati dissolved its Park Board. David Baker, an insurance executive who served as the president of the Cincinnati Board of Public Works in the late 1870’s, came to preside over the Parks as well. He apparently ordered a start to a drive along the edge of the reservoir that got far enough along to erect a formal-looking limestone column chiseled with the still-legible caption “David Baker Pass.” (Some histories, confronted with that legend, have styled Mr. Baker’s last name as “Pass”.) Over time, however, the Parks suffered diminishing resources under the Board of Public Works. Superintendents at the parks, and specialized landscapers and gardeners, were folded in to larger pools of foremen and laborers that mostly worked on the city’s roads and sewers. (A walk up David Baker Pass will now lead up past the Seasongood Pavilion to the Art Museum.)

Reconstituted in 1891, the Park Board at first had to play catch-up on basic maintenance, hiring and training gardeners and foresters mostly to trim back overgrowth. Where the financial troubles of 1873 resulted in cuts to municipal expenditures, a new depression in 1893 inspired a more progressive response: “the unexpected action of the Board of Legislation, appropriating $30,000 from the Contingent Fund by ordinance, to be spent by the Board of Park Commissioners in giving work in the parks, in order to partially relieve the needs of some of the large number of the unemployed” produced a flurry of construction. Roads through arches abounded. Elsinore Gate, the valve house on Gilbert Avenue, came to serve as another entry arch for Eden Park: a road built through it took a quick right turn (now Elsinore Street) and ascended to Mt. Adams. Further grading and construction of retaining walls improved access from the Deer Creek side of Mt. Adams to a road around the Shelter House (now the Playhouse in the Park), although a hoped-for connection to the Baker pass did not materialize. 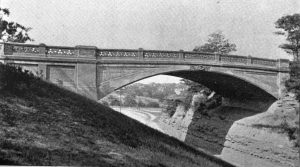 Another new roadway (now Cliff Drive) wound north from Martin Drive up the crest of the bluff overlooking the River above the current location of the Krohn Conservatory. The pumping station at the reservoir, and the Water Tower at the crest of the hill on the other side of Eden Park Drive, required considerable grading. In 1894 the Park Board set its relief workforce to work cutting a trench through the hill between Cliff Drive and the Water Tower. As the final fillip, the cherry on the ice cream Sunday at the northeast corner of Eden, the Parks contracted with the Melan Arch company to bridge the trench. Melan’s reinforced concrete construction technique had been be developed only a few years earlier in Germany; the Eden Park example was the first in Ohio and its 70-foot central span was quite long for the time. The full circumferential route again peters out, although a well-mowed meadow and a stairway both lead down to Fulton Street; across Fulton, another stairway leads up to what is now Beethoven Place. Behind a park maintenance building, there is a narrow moved path, reasonably passable in fair weather, past the park offices, to the main Eden Park Drive entrance. Across the drive there is an old stair and a path that leads to the Museum Parking lot.

On a proposal in 1875 to build an avenue over the bridge at the park entrance, see The Cincinnati Daily Star (Cincinnati, Ohio), 15 Sep 1875, Page 2

A modern photo of the “David Baker Pass” column accurately depicts the weathered nature of the text. The column in the Park forms a neat bookend with the stone column marking the intersection of “Baker Place” on Madison Road just west of O’Bryonville.

On the construction in Mt Adams see Annual Report of the Park Department for 1894, pp. 4-6

See also our page on the Water Tower.