Before leaving aside the Eden Park Reservoir to consider other construction in Walnut Hills during Reconstruction, we’ll pause to consider a couple of other Water Works projects in the Park carried out later in the nineteenth century. The Reservoir had plenty of capacity for the city’s needs, but that water of course had to be delivered to where it was needed. As we have seen, an issue even before the completion of the new reservoir was supplying water both to downtown and to the newer neighborhoods on the hills. The Mt. Auburn tanks were well located for delivery to the hilltop suburbs east of the Mill Creek – in fact their capacity was enlarged greatly and served as the source for Clifton and all points east until the mid-twentieth century.

The Hunt Street (Reading Road) pumping station, which lifted water to Mt. Auburn, proved more problematic. The small reservoir and large pump on Hunt Street were placed there for two reasons. It was convenient to the Eden Park Reservoir effluent pipes emerging from the tunnel at the Elsinore Gate. But the Mt Auburn tanks went in to service five years before the completion of the Eden Park Reservoir. The Hunt Street reservoir was initially supplied by the old downtown reservoir on Third Street, through mains at Eighth Street. For that reason, it had to be located at a slightly lower elevation than the Third Street reservoir.

The population in the city basin, especially in Over the Rhine, was still growing substantially in the 1870’s and ‘80’s. Yet nearly half the effluent capacity through the Elsinore Gate went through the 35-inch pipe to Hunt Street – and then up the hill. Less crucially, water from Eden Park flowed down to Hunt Street, only to be lifted again past the elevation of that reservoir to the tanks on Mt. Auburn. The trip downhill was a waste of energy.

By the early 1880’s the Water Works proposed a different solution, but financial constraints put off the start of construction until 1890. The Works decided to build a large iron tank at the highest point in Eden Park. It added a new pumphouse just east of the Eden Park Reservoir in order to lift water from the reservoir to the Eden Park Water Tower. While the tower was not as large as the Mt. Auburn tanks, it was high enough to provide pressure to push the water to Mt. Auburn. (Such a tower is known in the water supply business as a stand pipe.) 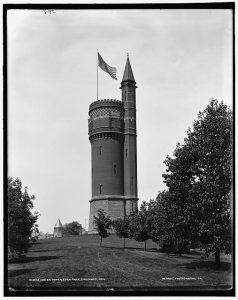 Samuel Hannaford, who had designed the Elsinore Gate, got architectural contracts for both the pump house and another decorative tower. Boilers and steam engines for two six-million gallon-a-day pumps filled the large space inside Hannaford’s ornate building. A brick water tower was built around the elevated iron tank, nearly as iconic and as fully a folly as the towers at Elsinore. A small stairway spiraled up inside an attached taller, narrower brick tower to allow access to the roof. Like the valving in Elsinore Gate, the Eden Park standpipe took the form of a crenellated tower, ready to repulse medieval invaders from any direction. After this fortress shell was completed in 1895, visitors could buy tickets for a nickel to climb the stairs and go out on an observation deck atop the water tank for the most elevated view in the city.

According to the plan, flow through thirty-six-inch mains under McMillan Street – originally built to move water from the Mt. Auburn tanks to Walnut Hills and points east – could now be reversed carry water from the Eden Park Tower to Mt. Auburn. In the other direction, two twenty-inch mains, originally fed from Mt Auburn through the McMillan pipe, now served the eastern suburbs directly from the Tower. It was hoped that the Eden Park station would fully supply the district served by the Mt Auburn tanks. This would have allowed the thirty-five-inch effluent pipe from Elsinore to Hunt Street (Reading Road) to convey water downtown instead of up to Mt. Auburn, supplementing the thirty-six-inch main under Gilbert and thus nearly doubling the supply for the city basin. In the event, however, population and water consumption on the eastern hills, especially Walnut Hills, exploded; in addition, the city began supplying the villages of Hyde Park and Evanston. The capacity of the pumping station in Eden Park barely kept up with this new demand, “especially in the evenings of hot summer days, when lawn sprinkling is excessively indulged in.” The Hunt Street Station and the Mt. Auburn reservoir were rebuilt and expanded.

The Eden Park Pumphouse and Water Tower operated for about 20 years. The pumphouse later served other municipal purposes for short periods. Ironically the iron tanks and a copper spire over the Tower’s stairs were disassembled as scrap during WW II, and all that remains is the decorative brick tower. Even the rooftop access to the spectacular nickel observation deck is gone. The condos next door today demonstrate that this is now a million-dollar view.

For general references, see the first article in this series, Construction during Reconstruction: Eden Park Reservoir Walls
A summary of the plans for the Eden Park Pumphouse and water routing appears in the report of the waterworks in the Annual reports of the city departments of the City for 1896, pp. 1715-1721 ff. The quote appears on p. 1716. https://babel.hathitrust.org/cgi/pt?id=chi.101607181;view=1up;seq=9 See also the introductory Report of the superintendent and engineer, pp. 7-9.

See annual reports for pipes laid; McMillan street 36-inch pipe was finished from May to Madison in 1884, p. 576: https://babel.hathitrust.org/cgi/pt?id=chi.101607181;view=1up;seq=9
For the Tower, see http://www.selfcraft.net/hannaford/hannasons6.htm
For other uses of the pumping plant see Cincinnati; a guide to the queen city and its neighbors. Compiled by workers of the Writer’s program of the Work projects administration in the state of Ohio. Sponsored by the city of Cincinnati, Ohio. Pp 277 and 279.