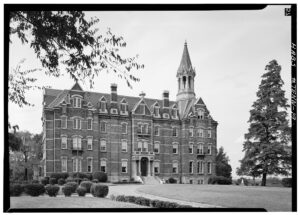 A. J. Dehart’s travels in the decade after he left Cincinnati in 1877 fit a pattern for ambitious young African Americans during the Reconstruction era. We have followed him from his position as a teacher in Cincinnati’s Colored Public Schools to his Congregationalist ministries in Cleveland and Topeka; in this piece we will turn to his next move from Kansas to Tennessee, and how it fits into the Black history of the period.
Many other important African Americans were educated or began their careers in the Queen City and moved widely around the country. Most relevant to DeHart’s story, Benjamin Arnett came to Cincinnati to minister to Brown Chapel African Methodist Episcopal (AME) Church in Walnut Hills from 1867 through 1870. A free-born Pennsylvanian and a teacher in that state, he had moved to Louisville immediately after the Civil War where he earned a license as an AME preacher. Arnett moved around as he moved up the AME hierarchy. From Walnut Hills he was transferred to a church in Toledo; he returned to Cincinnati to pastor the large AME Allen Temple in the old Bucktown area around Sixth and Sycamore downtown. Arnett became the financial secretary of the national AME Church in 1880; at that time, he settled in Wilberforce, Ohio, home of the first AME college, also called Wilberforce.
A. J. DeHart had joined Arnett in an investment in the unsuccessful “Africa Company” while both men were in Cincinnati in the 1870s. Both were also active in the national Black Grand Unified Order of Odd Fellows. In 1881, just after Arnett took over the financial management of the AME Church, DeHart moved from his Congregationalist church in Topeka. He was called by the small Third Congregationalist Church of Nashville, Tennessee. In these disparate positions and distant cities, DeHart and Arnett reconnected. DeHart did some work for Arnett’s AME finance office in Nashville. DeHart, also in 1882, attended a Methodist conference in Lynne, Tennessee. On that occasion he was referred to as Elder DeHart; he accepted an invitation to preach for a mixed congregation in a Methodist church in Lynne.
We need to step back for a moment to consider the state of Methodism during Reconstruction. The official name of the denomination in America was in all cases some version of the “Methodist Episcopal” Church. Long before the Civil War, Black worshippers in Philadelphia had withdrawn from a segregated Episcopal Church (a denomination at the time known officially as the Protestant Episcopal Church) and founded the African Methodist Episcopal Church. The AME and the white ME churches had little in common apart from their episcopal structure: bishops determined church policy and placed ministers. The AME always had Black clergy, and its affairs were directed by Black AME bishops.
The white ME church, like so many other denominations, split during the lead-up to the Civil War; the Church in the South organized as the Methodist Episcopal Church South. With Confederate defeat, the Methodist Episcopal Church South suffered huge disruption. The northern ME Church had been fervently abolitionist; large numbers of Methodist soldiers and chaplains served in the Union Army. As the Union occupied the South, some Northern chaplains took charge of the churches of the ME South. Some of these preachers courted Freedmen as parishioners, hoping for integrated congregations. Other northern ME officials set up exclusively Black congregations, which were called Colored Methodist Episcopal (CME) churches, a denomination still separate from the AME. (The CME denomination is now known as Christian Methodist Episcopal.)
DeHart’s flirtation with Methodists of any stripe probably did not embrace the either their Episcopal hierarchy or their Wesleyan theology. It seems more likely he was simply moonlighting as Arnett’s bookkeeper in Nashville in 1882-83 without accepting his religious authority. (Arnett would become an AME bishop, but not until 1888.) The Congregationalist American Missionary Association (AMA) report in 1885 still listed DeHart at Nashville’s Third Congregational Church, where he had been called in 1881. Nevertheless, DeHart’s presence at the Methodist conference, and his unrelated work with Arnett’s AME, illustrates his willingness to cross denominational lines for the sake of professional growth.

Nashville was home to the AMA’s Fisk University, named after the Union General in charge of the Freedmen’s Bureau in Tennessee. The Congregationalists who ran the AMA in Nashville also founded a Black church named after another Civil War general turned Freedmen’s Bureau head, O. O. Howard. At the time DeHart was in Nashville, Howard Church served as the Chapel for Fisk. (Nashville Howard is still an active congregation today, though now independent of Fisk.) It seems likely that the Third Congregational Church served African Americans in the town rather than on the campus. DeHart, as pastor to an AMA affiliated Congregationalist Church, would have had frequent connections with the Black community around Fisk, just as he did with other Black denominations.
Fisk became prominent and prosperous thanks to the fundraising success of its famous Jubilee Singers. The group toured the country beginning in 1871. The $20,000 brought in by the Jubilees during that first concert season funded the construction of the magnificent Fisk Jubilee Hall. The next year, troupe travelled to England and much of Western Europe, introducing the music later called Spirituals to an entranced world. Over nearly two decades the singers sent $150,000 to the University.
A. J. DeHart, himself a college graduate and Congregationalist minister, had been a notable singer in Cincinnati. He met at least one of the Jubilees, Jennie Jackson, during his sojourn in Tennessee. Jennie had started as one of the original Jubilee Singers in 1871. After the brilliant success of that first tour, the Jubilees received salaries of $500 per year; Miss Jackson stayed on with the group for more than a decade, apart from a withdrawal in 1877 owing to illness. The 1880 census even listed her occupation as “Jubilee Singer”! The two would be married in 1885.
– Geoff Sutton