The Elm Street School for Colored Children had been built in 1872, when Cincinnati annexed Walnut Hills north of McMillan Street. The Arnett law of the late 1880’s had allowed African American children to attend the previously white-only public schools. The Black faculty and relatively affluent Black parents in Walnut Hills argued that their students succeeded better in the segregated environment than as a tiny minority in schools run entirely by whites. (An unintended consequence of the integration of the white schools was the elimination of Black teachers in the newly integrated system, since the idea of Black teachers taking charge of white students was dismissed out of hand.) The Elm Street School, granted special status and renamed Frederick Douglass School around the time the street became Alms Place, remained open with Black faculty and staff, and accepted Black students from anywhere in the city. It is interesting to note that Walnut Hills High School a few blocks south at Ashland and Burdette would likewise come to accept students from anywhere in the city into a similarly elite “classical” college prep program, beginning in 1919.

The old Douglass School became increasingly crowded, even before the beginnings of the great migration of the 1910’s. Two temporary frame buildings on the grounds containing three additional classrooms did not solve the space problem. In 1910, the beginning of the great progressive construction era in Cincinnati, the Public Schools broke ground for a new Frederick Douglass School building at the same location of Chapel and Alms, still a school for African American children with an African American faculty and administration. Opened on Thanksgiving Day, 1911, with 416 students, the Frederick Douglass School served as a community center as well as an educational institution. 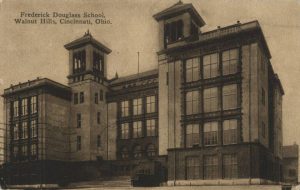 A massive structure of reinforced concrete clad in stucco, brick and terracotta, the new Frederick Douglass presented a thoroughly modern façade – a contrast to the Tudor-style of Hughes High School completed the year before or the nearby Hoffman School rebuilt on Durrell few years later. Like contemporary schools for white neighborhoods, Douglass included modern heating, ventilation, electric lighting, centrally controlled clocks, and telephones. With a certain trepidation, one might see it as a real example of a separate but equal building – antithetical to the goals of the fledgling NAACP, but reflective of the proud African American churches within a few blocks: First and Bethel Baptist, and Brown Chapel and Mt. Zion AME. It also reflected a segregationist mentality so clear that fire insurance maps of the era labeled several buildings in the immediate neighborhood “Negro Tenements.” Jacob Schmidlapp’s Gordon Terrace, Gordon Hotel, and a smaller development also for African American tenants grew up within a few blocks and a few years.

The first floor of the four-story Douglass edifice housed an auditorium with more than 350 seats which both accommodated school programs and provided a venue for events in the larger African American community. It also included space for a kindergarten – a Cincinnati innovation of the previous decade, not yet available at many of the white neighborhood schools – a doctor’s office staffed part time by public heath physician Mary E. Tracy, MD., and a large lunch room with an attached kitchen. The school also served as a “milk station” during the summers. Moreover, the ground floor included a branch public library with a separate entrance, to meet the needs of adults as well as the school children. It at once provided the African American community with library services, and discouraged that community’s use of the nearby Walnut Hills Public Library opened in 1906.

The Douglass second floor classrooms included “Domestic Science” and “Manual Training” rooms, millinery and dressmaking rooms, and a model dining room and bedroom for further instruction in domestic science. More classrooms on the third floor included one “open air” room for the education of children with breathing problems including tuberculosis (also provided in some of the schools in the city’s basin), and a laundry room. At a time when many African American families lived in apartments with inadequate and often shared bathrooms, the school provided boys’ and girls’ shower rooms with separate attendants, perhaps the only place many students had to bathe. The top floor was given over to a gym.

Frederick Douglass also differed from nearby “grammar schools” in grades served. Generally, the grammar schools only went through the sixth grade; most white students then moved on to “intermediate schools” through the eighth grade. Douglass, however, allowed its students to continue through the eighth grade. In the early years of the new building, high school remained a relatively rare option for white as well as Black students, so for most of the early students Douglass was their only school experience. The building also offered night school classes for adult basic education.