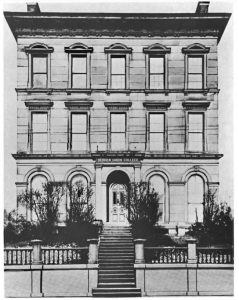 Lane Seminary, a Presbyterian institution in Walnut Hills founded in 1829, maintained a progressive theological stance through much of its century-long history. During the academic year of 1882-1883, a significant group of Lane’s faculty and students entered into a “Union Theological Association” with the first graduating class of the Hebrew Union Seminary. It is not clear how long this Union Theological Association lasted – there was coverage in three mainstream Cincinnati newspapers of an organizational meeting in November 1882 and the first two monthly meetings in December and January 1883. I have only found single article coverage from the February and March meetings. The report of the March meeting ended with the announcement of the next meeting for April, but I have found no articles from April or any further meetings, and no evidence of continuation after the first year.

Even this short-lived documented association between the two theological seminaries is striking. Rabbi Isaac Mayer Wise led the Reform movement in American Judaism, in part by integrating women into full participation in congregational life, worship, and liturgical music. (Conservative Judaism formed among congregations that rejected these reforms.) Rabbi Wise had received his training in Europe; most Rabbis in the US were also adult immigrants. Several small rabbinical schools had failed in the US owing to lack of funding. The reform movement recruited a collective of congregations – a Hebrew Union – to support a training center for an American rabbinate.

Wise founded Hebrew Union College in a converted mansion on West Sixth Street in downtown Cincinnati in 1875. The school had an eight-year curriculum. Students from throughout the country came to Cincinnati for public high school and attended the religious college after school from 2pm. They then enrolled in the University of Cincinnati and arranged their schedules to attend classes at both institutions for another four years. Rabbi Wise, in the early years joined by Rabbi Max Lilienthal who had earned a Ph D at Munich, taught Hebrew, the rabbinic commentaries of the Talmud, and emerging German linguistic and historical criticism of scripture. 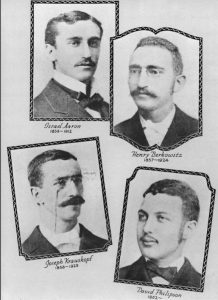 It is not completely surprising that Hebrew Union, the center of Reform Judaism in America, embraced a theological union with Lane Seminary. Rabbi Wise was among the earliest Jewish scholars to apply new intellectual techniques to the Christian gospels. His 1874 book “The Martyrdom of Jesus of Nazareth” claimed Jesus as a Jew and argued that the Romans, not the Hebrew Pharisees, were responsible for the crucifixion. The first meeting of the joint Hebrew Union and Lane Seminary students and faculty in November 1872 was in fact a momentous occasion. In a fascinating difference of language, the Enquirer said that the schools wanted to explore each other’s “faiths” – a word indicating different religions. The Cincinnati Commercial reported that the schools want to explore the “faith” (the belief) of the other “denominations,” a term used more frequently for closely related religions like “Protestant denominations.” The difference could simply reflect the opinions and vocabularies of the reporters, but the idea that the Reformed Jewish seminary wanted to present itself as just another Judeo-Christian denomination is a very real possibility. (The new Cincinnati Post also noted the meeting, although it did not send a reporter.)

For its part, Lane too shared a heritage with German scholarship and the new historical Biblical criticism. Henry Preserved Smith, an 1869 graduate of Amherst College who completed his studies at Lane in 1869-1872, went to Berlin and Leipzig for three years. He returned to Lane as a professor of Hebrew, Old Testament and Exegesis in the late 1870s through the early 1890s. He was an active participant in the joint discussions with Hebrew Union. Smith taught that, while all scripture is inspired by the Holy Spirit, it is possible that it might not all be strictly speaking true; in the shorthand of heretic-hunters, he denied the inerrancy of the Bible. His analysis of Christian scripture, like the rabbinic interpretation by Wise, marked a radical new departure. His writings were so controversial that his colleagues in the Presbytery of Cincinnati would charge him with heresy in 1892.

This was not a new thing for Lane Seminary faculty. Lyman Beecher, the first President of Lane, brought the sensibilities of a New England Congregationalist to Cincinnati’s Kentucky-trained Presbyterians. The clash was sufficiently harsh that the pastor of the First Presbyterian Church in Cincinnati unsuccessfully brought charges of heresy against Beecher over his doubts about strict predestination. Beecher had been acquitted; Smith was found guilty and banished from the seminary and the Presbyterian Church. He reversed Beecher’s denominational switch and became a Congregationalist, taking a post at Andover Theological Seminary.

The presence of Rabbi Wise and Lane’s Professor Smith together illuminate the importance of German intellectual life in Cincinnati in the nineteenth century. Not only theological thought, both Jewish and Christian, but also engineering and medical training (again embracing students from both faith communities) brought modern theory and practice to our city.

Cincinnati Commercial, “A Union Theological Association as been organized and held its first meeting in Lane Seminary Chapel,” November 18, 1882, p 12

–, “The Young Theologians, Meeting of Students of the Hebrew Union College and Lane Seminary,” January 10, 1883, p 7

–, “The Union theological association, composed of the students of the Hebrew college and Lane Seminary,” December 13, 1882, p 4

On Hebrew Union history, see its web site at

And, for example, Michael A Meyer, “The Hebrew Union College – Its First Years”,available on line at http://library.cincymuseum.org/journals/files/chsbull/v33/n1/chsbull-v33-n1-heb-007.pdf