Skip to content
The Walnut Hills High School yearbook, the Remembrancer for 1918-1919, presents a spectacular perspective on the year of the “Spanish” Flu. 1918 was also the last year of the “European War,” after the entry of the US known as the First World War. The book opens with a dedication to the memory of “those brave boys of Walnut Hills High School” killed in the war, a list of twenty including some notable Cincinnati names. Alumni must have thought it spoke well of the school, in those bygone days, that most of the young graduates had died as officers.

The class of 1919 was also a graduating high school class with all the hopes and “in” jokes and societies and teams the school at Ashland and Burdette sponsored every year. Yet from the beginning the class confronted grown-up difficulties. A poetic “Class History” by graduating Senior Emma Freericks recounted the momentous events since the class had started high school in the fall of 1915. In their sophomore year
“The message sped throughout the land. One day,
That war had been declared to rid the world
Of Prussia’s autocratic government.”
A Calendar for the Senior year includes comments about the ways in which the larger world impinged on student life. October was dominated by a single event. Beginning on the 2nd: “An epidemic of influenza is started.” On the 3rd, “The flu is getting worse.” On Monday the 7th we read “Whaddya know about this? Schools shut down on account of the flu!” On Friday the 11th we learn “No School all week. Shows are closed too, alas – also soda water and churches.” After that, every Friday through November 8th we see the note “No school all week.” That fifth week, the Calendar added the remark “This won’t last forever.” Monday November 11 contained a still more startling notation: “The Germans throw in the sponge and peace there is. Grand blowout downtown. Parade and superfluity of noise and confetti.” This, I suppose, is what comes of a classical education abridged by five weeks at home with neither church nor soda water.
Emma Freerick’s Class History a bit more elegantly recounted 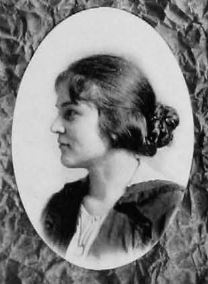 “The world went mad with joy, ‘flu’ was forgot
For exhibitions of unbounded bliss.
The doors of school again were opened wide;
Once more we started in to gain success;
But just before Thanksgiving Day, the ‘flu’
Broke out again, and we were quarantined
Until the last days of the waning year.”
In Walnut Hills as in the wider world, the tremendous disruption of the flu, closing the high school for practically all the 1918 part of the school year, took a back seat to the news of the Great War. Somehow, Armistice Day seemed not only bigger news, but also a more momentous liberating influence. The authorities threw open the doors of social isolation. The new virus, however, paid no heed to political news and 11/11/1918 invited a resurgence.
The images show Emma Freerick’s 1919 Senior picture, and the old Walnut Hills High School from the 1918 Remembrancer.
– Geoff Sutton