Skip to content
The global influenza pandemic of 1918-1919 still ranks as the last great pandemic. There is not much information in the usual sources for effects in Walnut Hills, but it’s interesting to look back at the beginnings of the outbreak in Ohio, as reported in Cincinnati. In sharp contrast to COVID-19, the 1918 pandemic was most virulent among people in the prime of life. It spread like wildfire through the huge concentrated armies of World War I, killing many more soldiers than the war did. 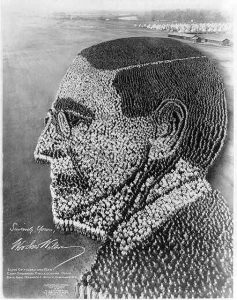 The biggest army facility in Ohio was Camp Sherman near Chillicothe, built hastily in 1917. As late as September 5, 1918 the Camp was sufficiently relaxed to produce a photo of a formation of 21,000 men lined up to produce a portrait of President Woodrow Wilson. It has the curious quality of seed art displayed at a county fair. To my mind, it seems an odd military display by a contingent preparing for trench warfare in Europe. The progress of the flu, which would sicken Wilson nearly unto death during peace talks in early 1919, makes the exercise even more jarring.
In mid-September 1918, the new flu was sickening thousands of military men in a camp near Boston. On September 24, the press inquired about a report of a case at Camp Sherman. The headline said it all: “HEALTH of Camp Excellent: No Spanish Influenza at Sherman, It Is Said.” Major F. C. Duckwell, the camp surgeon, made a statement aptly paraphrased by the headline. Duckworth said that he hadn’t reported any Spanish influenza and explained that people were misled by the fact that there were 10 cases of ordinary flu, “nothing more than the old-fashioned grip. No laboratory test have been made … Influenza is common at this time of the year, and the number of cases at Camp Sherman is a very small percentage, based on the 36,000 population.” 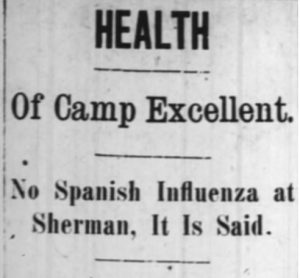 Bacteriology was coming into its own by the early decades of the twentieth century. The bacteria responsible for many infectious diseases had been identified using microscopes – common new diagnostic devices in most medical labs and doctors’ offices. Yet we now know that the flu is caused by a virus, a much simpler and smaller infectious agent beyond the reach of light microscopes. Duckwell and his team were diligent searching samples for a new bacterium and they simply couldn’t find one. Complete faith in Koch’s Postulates – all disease is caused by bacteria; newly discovered bacteria can be cultured, and cultured bacteria must produce the disease in a different species – completely missed the flu. (It turns out that infecting another species also turned out to be more complicated for bacterial diseases than Koch had imagined.) This failure to get accurate test results, then as now, set planning in Ohio back by at least a week.

September 25, the day after Duckwell’s reassurances, the same newspaper reported “WAR HEADS and Red Cross Confer Upon Means of Combatting Spread of Influenza” owing to the rapid spread in Army camps. Just a week later, the October 2 headline read “NURSES Are Rushed to Ohio To Help Check Pneumonia at Camp Sherman.” (You may need to click on the images to read the whole headline) There had been 15 deaths in less than two days; “dispatches today reported 1,200 cases of Spanish influenza at Camp Sherman.” When asked how this number had gone unreported, the “reply was that the bacteriologists here have not yet discovered the Spanish Influenza Germ.” Yet 45 Red Cross Nurses were on a train to Chillicothe.
In 1918 as in 2020, there was no medicine to counter the virus causing the pandemic; doctors, and especially nurses, treated the stricken with nourishment and cleanliness and cheer. At Camp Sherman, about 1,200 soldiers died from the flu.
– Geoff Sutton