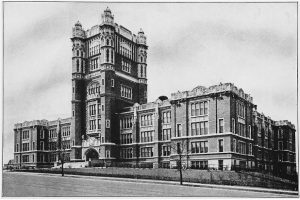 By 1918, Walnut Hills High School had adopted a “classical” curriculum aimed at preparation for college. Students from our neighborhood could also attend the much larger Hughes High School, already in its current building at the end of McMillan Street which was opened in 1910. The Senior Class of 1919 obviously experienced the same larger world as that Walnut Hills class we looked at in the previous post. Hughes had a significant commercial and trades curriculum, though it also sent many students to college – especially at the University of Cincinnati across the street. The unpretentiously named Annual for 1919 managed to chronical the year in language at least as pretentious as that of the Walnut Hills Remembrancer. Yet the flu cast a much longer shadow on the Hughes yearbook. Nearly every sport or club at Hughes noted the impact of the school closures, specifically naming the flu as the culprit.
As at Walnut Hills, the First World War seemed like the most momentous current event at Hughes. The editors waxed poetic about their young soldiers, and (like Walnut Hills) devoted a page to “Our Gold Stars” – thirteen who did not return from the War. There was another page with sketches of five graduates who received medals of honor from the governments of Belgium, Greece, France, and the US. Yet in terms of everyday student life there was no mention of the war; the global flu pandemic played a much larger role at Hughes. The class history noted, “At the beginning of our Senior year we planned to do many things, … but a newly arrived gentleman from Spain – Señore Influenza, had other plans.”
Even the year’s calendar burst into verse for October, spent almost entirely at home: 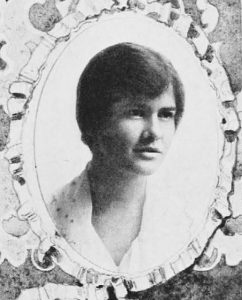 Darned the socks for mother,
Until the thread gave out
Ran so many errands
It almost made me shout,
Not even a picture show open
Gee this is an awful age.
To be barred from all the movies,
Has there even been such and outrage?
Everything’s all in a mixup.
For germs are flying all about,
Leaping and hopping on victims
Until we are all kept in doubt.
But hurrah! November eleventh’s a star
And the Flu ban is over and so is the war.
In November, school resumed on the 13th and the calendar reverted to prose, reminding us of a little more history from that momentous year – the Prohibition Amendment to the constitution which had been passed by Congress in December 1917 would be ratified by the states on January 16, 1919. The month’s calendar for the end of Thanksgiving week noted:
26 – A certain topic of conversation is for the second time beginning to occupy our homes and newspapers.
27 – Said topic is not the “Dry Amendment.”
28 – It is affecting our attendance at school.
29 – Health Officer Peters in in a terrible predicament. The aforementioned topic of conversation, the “flu”, is again bothering his heavily-taxed mentality. What can be done? Quid faciat? Que faire?
And on to December, again mostly poetic: 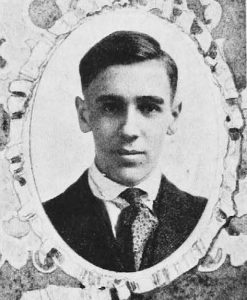 2 – School is still going, but if 5% of the pupils are absent, because of the “flu,” we shall close down.
3 – Sure as shooting, today there were,
Even more than five per cent
Caught the “Flu,” and so you see
Once more to our dear homes we’re sent.
Now once again we do some work,
Darning socks, we do not shirk.
Fortunately for the teachers, we’ll say
Lots gave work to do each day.
Unless we did it faithfully.
Both you and I had lots to do
About the thirtieth of this month,
Now think. Did this apply to you?
The last stanza refers to the reopening, this one permanent, on December 31, when the “lots of work” assigned to do each day came due.
It seems the disease, in Cincinnati and in the world, generally produced relatively mild illness in children; the heaviest toll apart from the very old and the very young, fell on people in their mid-twenties through their mid-thirties. The most severe high school privation of the 1918 Flu Pandemic – the closing of the picture shows – was recorded at both Hughes and Walnut Hills High Schools.
– Geoff Sutton
Images, all from the yearbook, show Hughes in the 1910s, Class Historian Alberta Kumler, and Annual editor Gaylord Merriman.