Skip to content
The Influenza Pandemic of 1918, like the Covid 19 Pandemic, attacked different segments of the population with different severity. Then as now the Black population suffered disproportionate illness and death. In June, 1919, the head of Cincinnati’s Board of Health chaired a meeting where he acknowledged “that over three times as many colored people died of tuberculosis per 1,000 of population, and over three times as many of them per 1,000 population died from pneumonia” in 1917 and 1918. In the mortality statistics of the day, most deaths from the Spanish Influenza pandemic were counted as pneumonia, since pneumonia was the last stage of the disease. 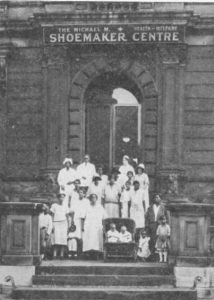 The passage quoted also ties the high pneumonia (influenza) death rate to another reason for the high mortality rate in the Black community: there were then, as there are now, serious preexisting health conditions. A century ago, tuberculosis constituted the most common serious “comorbidity.” Health department records analyzed in 1920 showed a decrease in tuberculosis deaths in 1919 as compared to 1918 but acknowledged “one reason for the reduction is the fact that influenza found victims of tuberculosis an easy prey. Most of the cases reported were those of persons between the ages of 20 and 40.” The highest per capita deaths from these respiratory diseases occurred in the eighteenth ward, the old West End near the River centered on Fourth and Race – where in 1926 the Negro Civic Welfare Association established the Shoemaker Health Center. 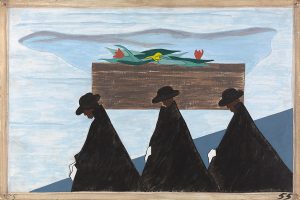 Some earlier posts this Spring looked at a series of paintings by the Black Harlem artist Jacob Lawrence the chronicled the “Great Migration” of rural Southern Blacks to the Industrial North, paintings we looked at in the Fourth Grade History Club at Spencer School in Walnut Hills. We read in Lawrence’s caption for the painting shown here, “The migrants, having moved suddenly into a crowded and unhealthy environment, soon contracted tuberculosis. The Death rate rose.” In 1918, in Cincinnati, they also contracted the flu.
– Geoff Sutton