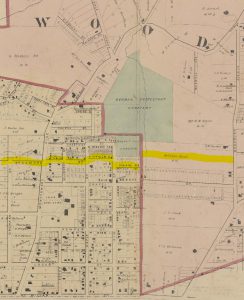 Lincoln Avenue runs east and west through Walnut Hills. This new series of posts will follow Lincoln Avenue through time and space in our neighborhood. On the current map, Lincoln runs about half a dozen blocks north of McMillan. We’re in Cincinnati, so parallel streets wander closer together and farther apart; the east-west streets between them run for a block or two and then stop, so even when they are strictly parallel the number of blocks between them changes.

On the maps shortly after the Civil War, which this post addresses, the name Lincoln does not appear on a street in Walnut Hills. What became Lincoln Avenue was in most places called Sycamore Street. Note that in the first, extremely accurate 1869 map, the five-block long Sycamore took a couple of Cincinnati “jags” at Montgomery Turnpike (now Gilbert Avenue) and Maple Street (now Park Avenue) where the alignment was not quite straight. It ended on the east at Elm Street (now Alms Place), although with another more severe jag to the South the route continued east for another block on Walnut street. It ended at the corporation line of the independent Village of Woodburn (shaded pink) indicated by the heavy red line on the map. At the time, there was no north-south road along that boundary line.

It turns out, not surprisingly, that there were lots of streets named Lincoln in the years immediately after the Civil War. The Village of Woodburn (which ran east from Walnut Hills to about O’Bryonville) named the first such street in our neighborhood, seen in an 1877 map in the second image. The new Lincoln more or less connected Sycamore Street in Walnut Hills to a Sycamore Street in the Village of Woodburn, running east from Woodburn Ave and now known as DeSales Lane. 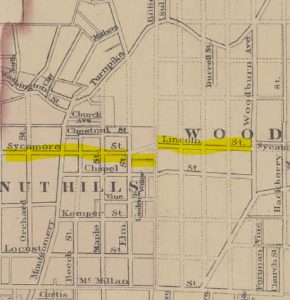 The detail from that 1877 map shows the dreams of developers. Sycamore St in Walnut hills was shown straight as an arrow, though no realignment has occurred to this day. The existing Walnut Street south of Sycamore running east from Elm (now Alms Place) was sketched in, unlabeled. The dotted lines indicate “paper streets” – mostly an even grid of streets in the village of Woodburn that decorated maps for another fifteen or twenty years without a single shovel’s work on the ground. Only the south end of Ashland Avenue along the border between Walnut Hills and Woodburn, and the off-grid connector between Sycamore in Walnut Hills and Lincoln Street in Woodburn, were actually built.

Even the completed Lincoln Street in Woodburn remained largely a figment of development imagination. Looking at the 1867 map, Lincoln Street in the 1877 map seems to have been sketched in as the centerline in an estate owned by Rebecca Rust, just as Gilpin Avenue to the north ran through the center of the estate of a Mrs. Gilpin. The north-south Durrell Avenue which ran south from William Durrell’s property on Montgomery Road (now known as Gilbert Avenue) just west of Woodburn Avenue, not part of the dotted grid, was extended as far as the southern boundary of the Rusk property on the 1869 map. As early as July 1870 there was an auction offering “eight beautiful building lots, situated on both sides of Lincoln avenue, just west of Durrell avenue, and one square west of Woodburn avenue, in Woodburn, Walnut Hills.” (That dusty stretch of Durrell was later widened and absorbed as part of Victory Parkway.) Yet as late as 1884 there were no buildings in the auctioned block of Lincoln west of Durrell, and only a couple of small dwellings in the eastern block between Durrell and Woodburn.