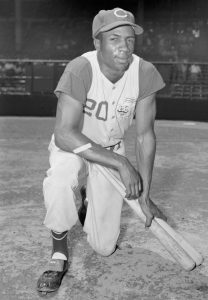 Frank Robinson, an African American man, signed with the Cincinnati Reds organization in 1954 and played a couple of years in the minor leagues. Jackie Robinson had integrated major league baseball in 1949; the Reds did not field their first Black players until 1954. Robinson came up to Cincinnati in 1956. Like most of the early pioneers, Robinson had to be better than most whites to make the lineup.
Robinson filled the bill. By July he made the starting lineup of the National League All Star Team. He won Rookie of the Year honors and tied the record for the most rookie homeruns. In 1961 he was the league’s Most Valuable Player, leading the Reds to their first National League championship in more than 20 years. He played for the Reds through 1965. Traded to the Oriels in 1966, he won the American League MVP that year and took the Oriels all the way, winning the World Series MVP award as well. He also achieved a rare triple crown, leading the league in batting average, homeruns, and runs batted in. Robinson lived until 2019. 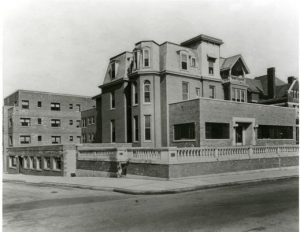 It proved harder for Robinson to integrate housing than to integrate the Reds. During his Rookie season he lived in Walnut Hills, as a residential guest in the Manse Hotel. The property at 1004 Chapel, next door to the Cincinnati Federation of Colored Women’s Clubs house, was owned by Black Real Estate mogul Horace Sudduth. Frank Robinson was only one of the Black celebrities who stayed at the Manse. Many early Black major league ball players, including the first, Jackie Robinson, stayed at Sudduth’s institution. It was the finest Cincinnati hotel in the Negro Motorist Green Book .
When in 1961 Robinson decided to buy a home in Cincinnati, he found one he liked in a white neighborhood. His real estate agent told him that he couldn’t sell him that house – because of the redlining that still operated in the city.
– Geoff Sutton