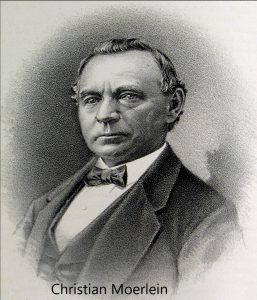 The Eden Park Reservoir constructed during Reconstruction solved one problem for the city’s water supply: at 100 million gallons, it could hold a sufficient quantity of water to dependably distribute throughout the city. Water quality, however, posed more vexing challenge for the Water Works.

Water quality in the Queen City faced many obstacles. One problem that we no longer confront was the radical change in water level in the Ohio River. The lock and dam system created in the 1920’s to facilitate navigation has turned the Ohio into a series of long lakes, with the water regulated to maintain a channel for barges year-round. Before the construction of this “slack water” system, high and flood stages of the River were as voluminous then as they are now. But river levels at Cincinnati fell to below five feet during the late summer dry season every year; sometimes the depth trickled below three feet. A good rain at the end of a dry spell would wash all sorts of vegetation into the river and this soup of weeds and branches would begin to decompose. The Front Street pumps sucked this organic matter into the supply system for several days at a time; the small reservoir on Third Street dumped the muck right into the city supply. Earlier posts in this series also noted that the intake for the Front Street pumping station was located just above Deer Creek’s confluence with the Ohio. Waste from the increasing number of sanitary sewers joined the offal from the slaughter houses near the base of Walnut Hills. During times of high water, eddies in the river flow could mixed this waste into the intake pipe for the pumps.

Eden Park Reservoir did have some positive effect on water quality. The hundred-million-gallon artificial lake acted (as predicted) as a settling tank, holding the river water long enough to allow many particulate impurities to sink to the bottom. The water flowing to the effluent pipes was substantially cleaner than water from Third Street. (The two Eden Park reservoir basins were drained one at a time every several years to muck out the filth on the bottom.) Yet this settling did not solve the quality problem completely, especially with respect to taste and smell.

Everyone understood that water drawn from farther upstream would contain less sewage and industrial waste than the Front Street intake. Theodore Scowden, Engineer of the Water Works in 1871, scouted possible sites. He took water samples from likely locations for a pumping plant along a ten-mile stretch of the Ohio above the Front Street pumps. A hundred and fifty-acre farm owned by the Markley family near California, Ohio, upstream from the Little Miami river, provided convenient access, ample space for a pumping plant, and water markedly clearer and better tasting than any practical site closer to Cincinnati.

At the time of the Markley Farm Proposal, the brewer Christian Moerlein sat on the water board. Moerlein agreed with Scowden’s choice of the intake location, and it was Moerlein who negotiated the purchase agreement for the Water Works in the spring of 1871. As we have mentioned in an earlier post, Scowden designed a complete waterworks plant for the Markley farm, including two new pumping engines to relieve critical capacity constraints. Scowden estimated the cost of the new plant and water mains to Cincinnati at $4.5 million. But the timing of the proposal was all wrong. The Eden Park Reservoir had fallen behind schedule and over cost; machinations in gold markets and Western railroad bonds in 1872 made money tight and dear, and the city was underwriting increasingly large sales of Water Works bonds. The Water Works leased the Markley property out for continued use as farmland.

Christian Moerlein’s public service on the Water board provides a couple of interesting sidebars. By custom, Water Commissioners did not pay for water in their own homes – a reflection of the spoils system in fee-based federal offices introduced a generation earlier by president Andrew Jackson. In a bold move too typical of the political ethos during Reconstruction, Moerlein tried to extend the water rent courtesy to his business as well as his residence. The Moerlein brewery – the largest in Cincinnati – consumed an enormous amount of water. Even the other Commissioners found this arrangement by a public official to subsidize his private business a bit much and demanded the brewery pay for its water. Moerlein eventually reimbursed the Water Works, although (further mixing public and private business) he took an allowance for what he claimed were related expenses involving storage of the utility’s pipe on brewery property.

Yet the sincerity of Moerlein’s concern for improved water quality sought in the purchase of the Marley farm cannot be questioned. The brewery really needed better quality water.  Frustration with city Works caused Moerlein to embark on a risky, expensive project in 1877: he began drilling a well on the grounds of his plant on Elm Street near McMicken. Well drilling was an iffy business in the 1870’s; scientific hydrology was only beginning and the deep geology around Cincinnati was not well understood. Moerlein was only partly lucky: he struck water at a depth of 834 feet and his 8-inch diameter well proved to be a gusher, producing a hundred barrels of water per hour. Yet this artesian water had unpleasant sulfur taste and served only for washing, so Moerlein kept on drilling. Other large or particular consumers followed his example. A newspaper article from May 28, 1878 reported a tremendous irony:

“The artesian well at Hauck & Windisch’s brewery proved a successful one last evening.  A depth of two hundred and forty feet was reached when fresh, clear and cool water was found. The continuous flow is sufficient to supply the immense brewery with enough water to carry on their business, and to discontinue the use of the supply from the Water-works.

“The well at Moerlein’s brewery, although a depth of two thousand one hundred feet has been reached, has as yet given no fresh water.

“The stream at Hauck & Windische’s is three inches in diameter, and the force of the water is sufficient to drive it to a height of several feet.

“Proctor & Gamble are negotiating for a well on their premises.”

Water Works reports are available online. For the report on Moerlein and the Marley Farm see
https://books.google.com/books?id=pDk5AQAAMAAJ&printsec=frontcover&source=gbs_ge_summary_r&cad=0#v=onepage&q=moerlein&f=false

For the quote, see