Skip to content
Our previous post looked at the Abraham Lincoln monument in Avondale, both today and when it was constructed in 1902. The most famous incident at the monument in living memory came in the summer of 1967, beginning on June 11. The site was the center of the revolt or civil unrest on the part of the Black community in Avondale, Walnut Hills, and Evanston. As I have looked at the reports from that summer, I am struck by a number of things that escaped my not-quite teenage memories. 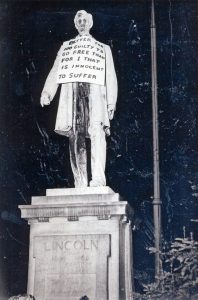 First, I remembered pictures of the Lincoln statue doused in black paint down the front, but I was surprised to read the Benjamin Franklin paraphrase “Better for 100 guilty to go free than for 1 innocent to suffer.” It’s a wonderful thing to see that quotation from a Founding Father in front of Samuel Ach Jr. High School. The school was long derided as a failed institution in a neighborhood assumed to be ignorant if not illiterate; it seems that the high-achieving Black principal Lawrence Hawkins had other ideas. That most American of expressions of civil liberties as a placard on Abraham Lincoln indicates that the segregated system had provided a more supportive and subversive education than its critics right and left suspected.
The quotation seems a particularly apt sentiment given the immediate trigger for destruction. I think not so much of the conviction of a Black murder suspect as of the arrest of his cousin who protested that conviction in front of the Lincoln statue. Yet is was for carrying a protest sign at that spot – an area much broader and easier to pass by than an ordinary sidewalk – that the police arrested the lone Black man with a simple sign for obstructing pedestrian traffic on June 10. It was owing to that encounter that the community launched a much larger protest the next night. To provide an analysis appropriate to twenty-first century social media, it was practically a meta-protest. It was carried out in the very American company of Abraham Lincoln with the backup chorus of Benjamin Franklin.
Second, looking back before the Nixon administration and its racist “Southern strategy,” I was surprised how quickly and apparently sincerely the white press and power structure in Cincinnati acknowledged that the root cause of the violence and destruction was the poverty, unemployment, and lack of opportunity in Walnut Hills, Avondale, Mt. Auburn and Evanston. All three had been recently established as majority Negro neighborhoods. Even the Cincinnati Enquirer, bastion of Republican establishment, on June 20 ran an above-the-banner editorial that began
“Cincinnati was the scene last week of destructive rioting which caused damage estimated at $2 million. The reason, we have been told, is that the city was not aware of and responsible to the desperate needs of some of its slum dwellers. The Enquirer accepts its share of responsibility for any failure to communicate that need. … The reason for the riots, it is emphasized, is that Cincinnati has been long on studies, plans and promises and short on action which would result in solutions to problems.”
It seems as though in 2020 we have returned to the optimistic promises of the Johnson years and the War on Poverty. Many white folks, including some in municipal and state offices, are finally recognizing (at least rhetorically) that Black Lives Matter. Let’s hope that we will not again be long on studies, plans and promises and short on action.
My third surprise came with the stark contrast between the Enquirer editorial and a news article published five days earlier in a full-page spread on the rebellion. One headline on a full-page spread on the unrest in the Enquirer on June 15 read “Avondale’s no Slum … So Why?” The piece touted anti-poverty programs including urban renewal, improvement of the housing stock by homeowners, and the $300,000 budget of Avondale Neighborhood services. (Walnut Hills, equally devastated, had a much longer tradition of Black home ownership, Black business ownership and Black institutions like a dozen Black Churches and the Melrose YMCA which saw the construction of a new building in 1967.) The news article ended with the conundrum that Avondale “is the kind of place in which a riot really isn’t expected to occur. But it did.” It took only a few days for that fact to turn it into a slum with desperate needs, as declared by the June 20 editorial.
Yet the outcome of the rebellion in 1967, and again in 1968 after the assassination of Martin Luther King, Jr., was to turn the diverse, thriving neighborhoods of Avondale and Walnut Hills into desolate islands of disinvestment. The devastation that began on Reading Road spread to Burnet Avenue and then to Peebles corner and Woodburn Avenue in Walnut Hills also saw the firebombing of the neighborhood’s Modern Laundry and Dry Cleaning complex and the Seybold Paper warehouse– those buildings alone accounted for $800,000 of the damages.
The fourth element I had not remembered was the mechanism for disinvestment. Even more significant than the property losses in the area, insurance carriers stopped writing policies in the neighborhoods, preventing those who wanted to rebuild businesses from doing so. (The same tactic more than a hundred years earlier had forced the closure of the Black Robert Boyd furniture factory in the Bucktown neighborhood in downtown Cincinnati.) The Fair Housing Act of 1968, in the wake of the assassination of Martin Luther King, was supposed to end Redlining in the real estate industry; the insurance industry stepped in to suppress Black businesses in Avondale and Walnut Hills without skipping a beat.
The wealthy residential enclaves to the east, still white at the time of the rebellion owing to the government-sanctioned practices of the real estate industry, were largely unaffected by either the riots or legislation. (It might be observed that fifty years has not been enough to change any of these demographics.) The powerful institutions to the west – the University of Cincinnati, the hospitals, medical offices, and related bureaucracies, were able to buy up the beautiful mansions of Mt. Auburn, or to tear down deteriorating residential blocks there and in Corryville, for the ever-expanding medical and educational campuses. Walnut Hills and Avondale were seen by city planners as little more than a transportation corridor between these Predominantly White Institutions and the white bedroom communities that staffed them.
– Geoff Sutton