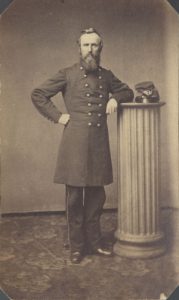 Rutherford B. Hayes got his political start in Cincinnati. He arrived in 1850 as a young lawyer from a prominent family in Central Ohio educated at Kenyon College and Harvard Law. Hayes engaged mostly in a commercial practice (then as now where the money is), but more visibly acted as a criminal defense lawyer and as an attorney for African Americans arrested as allegedly fugitive slaves. In 1852 he married a Cincinnatian, Lucy Webb, a fervent abolitionist and prohibitionist whose views influenced her husband. Hayes became involved in the new Republican Party around Governor Salmon P. Chase. He served as the Cincinnati City Solicitor in the late 1850s. As the chief counsel for the municipal government, he did research and provided advice, and reviewed city contracts when they were issued and when they were completed. He was not afraid to asked hard questions of powerful contactors.

After Lincoln’s presidential inauguration in 1861, Cincinnati swept Hayes and most of his Republican colleagues out of office in November – our city started the war dangerously close politically as well as geographically to the slave states. (Even the City Engineer Albert West Gilbert lost his election.) After some hesitancy Hayes joined the Union Army as an officer; he would rise to the rank of general. Hayes fought valiantly, suffering five battle wounds, and losing a horse shot from under him. His heroism launched a meteoric political career. Nominated in early 1864 to represent Cincinnati in Congress, Hayes refused to leave his post in the army to campaign. He nonetheless won the election over the Democratic incumbent – the political tide had turned again. Reelected in 1866, the moderate Hayes joined the Radical Republicans in passing the Fourteenth Amendment (granting citizenship and equal protection to everyone born on American soil) and the civil rights act of 1866.

Hayes stayed mostly in Washington as a congressman. Lucy left the children with her parents and commuted between the Queen City and the Capital. Rutherford resigned his seat in the summer of 1867 to campaign for Governor of Ohio. Lucy, pregnant with the couple’s sixth child, moved with her children to Walnut Hills for the duration of the campaign. Rutherford spent most of his time on the campaign trail. It was our neighborhood’s only residential brush with the family.

In those years after the Civil War, under the Reconstruction obstructionist president Andrew Johnson, Hayes ran for governor primarily as an advocate for African American suffrage. More surprisingly his Democratic opponent Allen Thurman organized his campaign in opposition to extending voting rights to Blacks. In a close election – the margin was about half a percent – Hayes became governor. (He and Lucy left Cincinnati for good.)

Despite a proud abolitionist tradition in Ohio before the Civil War, an initiative on the same ballot that made Hayes governor in 1867 failed to extend the voting franchise to Ohio’s Black citizens. Indeed, Democrats gained a majority in both houses of the state legislature. (The Ohio senate sent Thurman to the US Senate, where he became a leading Northern opponent of Civil Rights for the African Americans the Civil War emancipated. He even served as a Democrat on the Electoral Commission in 1876 described in the previous post that made Hayes president.) It was perhaps more his heroism than his policies that brought Hayes to office.

It was left to the US Congress to pass the Fifteenth Amendment in early 1869 that forbad denying the vote based on race, creed or color. Governor Hayes supported the amendment, but the Ohio legislature refused to ratify it that fall. So much for progressive Yankee racial policy.

In state elections in November 1869, Hayes won another tight race for governor. This time his Republican party gained a slim majority in the legislature. Resubmitted to the legislature, Ohio ratified the Fifteenth Amendment in 1870 with a two-vote majority in the house and a single vote in the senate. Only after national ratification did the Republican legislature put Ohio in compliance with the federal mandate to finally allow Black (male) citizens the right to vote. With his legislative majority, Hayes also managed the passage of progressive legislation including the establishment of the Agricultural and Mechanical College that would become Ohio State.

After a failed congressional bid in Cincinnati in 1872, financial difficulties in the Panic of 1783, and death of a proverbial rich uncle near Toledo, Hayes largely retired to the familial mansion in northern Ohio. Yet in 1875 Hayes won a third (non-consecutive) term as governor. At the Republican national convention of 1876 (held in Cincinnati) Hayes emerged after many ballots as a favorite son to capture the nomination. (Our populous swing state would provide about half the elected Republican presidents in a string that ended only after Warren Harding.) Yet as we saw in the previous post, the narrow election of 1876 (like the gubernatorial win in 1867) did nothing for the cause of Civil Rights Hayes still fervently embraced. The corrupt bargain that made him president bound him to remove Federal troops from the South, and abruptly halted Reconstruction.