The previous half-dozen posts examined the way businessman Robert Gordon thrived in the growing, prosperous and culturally rich African American community in Cincinnati before, during and after the Civil War. By the time of his death Gordon was a minor celebrity; he turned up in national accounts of wealthy Blacks during reconstruction and was covered with some regularity in the white press in Cincinnati. Yet he lived long enough that when the earliest histories of Black Cincinnati appeared, he was still a contemporary figure, so they largely left him out.

Carter G. Woodson, one of the parents of twentieth century Black History, rescued Gordon from the disappearing act imposed on successful African Americans by Jim Crow. Woodson founded the Journal of Negro History in 1916. The very first article in the first number of the first volume, written by the editor, concerned “The Negroes of Cincinnati Prior to the Civil War.” The bulk of the paper followed what was already a sort of cannon, but the closing paragraphs of Woodson’s article observed that a “much more interesting Negro appeared in Cincinnati … in 1847. This was Robert Gordon.” Woodson was in search of a hero, a person with a fortune and a name to rise above the anonymous poverty and misery of the ante-bellum enslaved. He cites as his sources Gordon’s children in Chicago – those would be George and Virginia Jackson – supplemented only with corroboration in Cincinnati directories from the ante-bellum period.

Woodson passed on the family lore that when he bought his freedom from his Virginia enslaver Gordon had accumulated an additional $15,000, and that he arrived in our city and immediately created the coal business that in fact he spent fifteen years steadily building. Otherwise, Woodson offered an anecdote from the children that has been repeated in most accounts of Gordon’s success:

“Unwilling to see this Negro do so well, the white coal dealers endeavored to force him out of the business by lowering the price … [Gordon] sent to the coal yards of his competitors mulattoes who could pass for white, using them to fill his current order from his foes’ supplies … In the course of a few months the river and all the canals by which coal was brought to Cincinnati froze up and remained so until spring. Gordon was then able to dispose of his coal at a higher price than it had ever been sold in the city.” 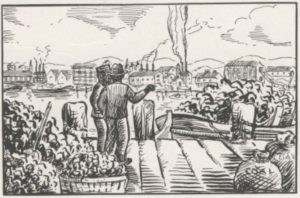 Woodson retold this story in a whole series of articles and books; his school magazine “The Negro History Bulletin” went on at considerable length in its first volume in 1937. It included a wonderful illustration. Gordon’s face seems not to have been captured in any surviving portraits or photographs, so Woodson had him drawn from the back, standing on his dock facing the river and a dozen smokestacks consuming his wares. Woodson did his best to un-erase Gordon from white-washed history.

In the years between Woodson’s two version in his Negro History publications, Wendel Dabney published a variation on the morality story, this one gathered in Cincinnati. Dabney’s overall account was much more realistic in terms of Gordon’s establishment of his business, but culminated in a tale equally grounded in outfoxing the foxes:

“A merchant from Pittsburgh brought down the river a large supply of coal. A dispute arose … in regard to the price. … Gordon … hesitated and haggled. … The white dealers were jubilant. … Gordon was stuck with this big cargo of coal dumped upon him. … Gordon showed that he had the same stock-broking brain that enthroned Jay Gould and the other Wall Street manipulators. Colder and colder it grew. Over the river was a deep sheet of ice … All the coal was gone from Cincinnati but Gordon’s. His prices went to the fabulous sum of one dollar a bushel.”

The Chicago and Cincinnati variants have little in common except for their moral. Both Woodson and Dabney tell wonderful stories in a Brer Rabbit sort of way, with the Black merchant outfoxing the white retailers or wholesaler who set out to harm him. In both versions we can see the long shadow of Jim Crow: imagining Black success meant outsmarting hostile white predators and little else. In neither case was Gordon cast as a conventionally successful businessman, competing on equal footing with white merchants, managing operations, his employees and his finances.

A single additional story not captured by Woodson finds its way into some recent accounts of Gordon’s career as a man who had struck it rich:

“One day, just before the big rise in bonds, he went into a Cincinnati bank and asked the cashier, who did not know him, if he had any bonds to sell. … ‘Well’, [said] Mr. Gordon, ‘I will take $150,000 worth.’ And, to the man’s surprise, he began to write out a check. The Cashier looked that the negro as if he thought he was crazy, and slipping into the President’s room, told him the story. The President of the bank looked out and said: ‘Oh, that is Robert Gordon! Give him the bonds. His check is good for three times that amount.’”

Here we see Gordon enjoying the simple pleasures of rich, owing to nothing but their riches. Again, the story shows Gordon outfoxing the fox, victorious over the officious white bank clerk who thought he was crazy.

Perhaps to see Gordon as a whole person, trading coal and investing in the old Bucktown neighborhood and later in Walnut Hills real estate, we need to look away from the whiteness that surrounded and disdained and hindered him. Moving among his African American peers including Henry Boyd with his steam-powered furniture factory, John Gaines’ and Samuel Wilcox’s grocery businesses as much wholesalers to the steamboat industry as retailers to Cincinnati families, collaborating with them and with Peter Clark in running the Colored Schools, developing legal and political talent in the community, we might find a story about Robert Gordon for our own times.