The 1882 Arbor Day celebration intersected with other history around the end of Reconstruction. It was as much an occasion for forgetting as for remembering – forgetting the Civil War and remembering a longer shared American history, reintegrating the states of the southern rebellion into the Union.

The chance meeting of Col. A. E. Jones and Baron Richard von Steuben, “Chief Forester of the German Empire” the year before had inspired Jones and his Walnut Hills neighbor John Simpkinson to call for an American Forestry Congress to convene in Cincinnati for five days in the spring of 1882. This gathering testifies to the logistical skills of its planners rather more than to the pressing urgency of forestry nationwide. Yet it also represents the importance of Cincinnati as the center the hardwood lumber market, even as Indiana and Ohio were declining as a source of the raw material.

Perhaps the most important symbolic message of the forestry meeting in Cincinnati was that it constituted a “National Convention.” This Convention, welcomed by Ohio Governor Charles Foster, spent its first day establishing a Constitution for the “American Forestry Congress.” Article IV stipulated that there would be a Congress President, and “a Vice-President from each State and Territory in the United States, and for each Province in Canada.” Only Louisiana and Nevada among the states, along with a few Western territories, failed to send Forestry Convention vice presidents.

The organization of the American Forestry Congress into nine US districts thoroughly integrated the formerly warring states. Confederate Virginia found itself in a district with New Jersey, Pennsylvania, Delaware, Maryland, District of Columbia, and West Virginia. A little further west Ohio, Indiana, and Michigan joined the former slave state of Kentucky and the former Confederate state of Tennessee in another district. These groupings certainly made sense in terms of the local forestation, but things could have been divvied up differently. 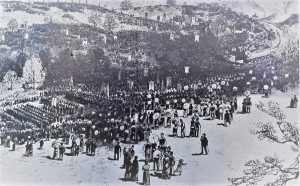 The planting of Presidential Groves on Arbor Day constituted another symbolic reunification of the states. All those Virginians from Washington through Monroe, punctuated by the Massachusetts Adamses, and Andrew Jackson from Tennessee brought delegations or descendants to Cincinnati.  The middle of the nineteenth century produced generally forgettable chief executives from a hodge-podge of states north and south. Former Cincinnatian and US President Rutherford B. Hayes had accepted the corrupt bargain to end the military enforcement of Reconstruction in order to win the contested election of 1876. More poignantly, President James Garfield (an Ohioan elected in 1880) had been shot in July of 1881, four months into his term, and died in September, half a year before the convening of the Congress.

No fewer than four Cincinnati sites hosted commemorative presidential tree plantings on that first Cincinnati Arbor Day. Washington Park in front of the Music Hall, and Lincoln Park in the West End hosted ceremonies for the two greatest presidents. Cincinnati hurriedly organized a memorial, now Garfield Place, for the state’s slain native son and planted a memorial grove there. With the Committee on Public Works running the Parks, its Chairman Walnut Hills resident John Simpkinson arranged for landscape architect Adolph Strauch to plat out a Presidential Grove in Eden Park with arboreal monument to every president from George Washington to Chester Arthur. The largest of the simultaneous celebrations came in the Park in Walnut Hills where the crowds were estimated between 25,000 and (with wild optimism) 50,000 people.

The festivities drew a crowd of presidents worthy of a state funeral: Ulysses Grant, Hayes and sitting President Chester Arthur all travelled to Cincinnati. Perhaps only Simpkinson, head of the city’s Public Works, was disappointed by this turnout: he had hoped that Arthur would bring his whole cabinet, and invited the governors of all the states. Not even the secretary of the interior seems to have put in an appearance, and only New York Governor Alonzo Cornell joined Ohio’s Foster. Nonetheless, “the Committee on Historic Trees have secured over two hundred to be planted in President’s Grove, from Plymouth Rock, Mount Vernon, Niagara Falls, and the battle fields of the Revolution, Indian Wars, 1812 and the rebellion.” (The last mention indicates that the Civil War had not completely escaped Cincinnati’s corporate memory.)

Forestry was perhaps a safe topic for reconciliation with the so-called redeemed states of the South. Yet Cincinnati’s embrace of the former Confederate states entering into the era of lynchings and Jim Crow was not the only unsavory political subtext in the preparations for Arbor Day 1882.  A report on plans for the festivities noted gratuitously, “If the President signs the Anti-Chinese Bill the representative of the Empire of Pig-tails at Washington will not be invited to come to the Congress the same as other foreign Ministers will be.” (The Chinese Exclusion Act) In the event, only Baron Richard von Steuben and representatives from the Canadian provinces played prominent roles in the Congress.