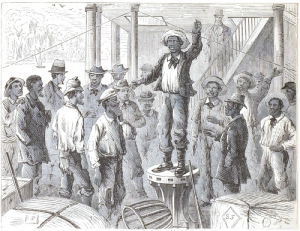 We saw in an earlier post that a number of African American men, and one woman, living on Lincoln Avenue in 1870, worked on steamboats. Amplifying the situation on Lincoln, steamboating was a strong industry in the whole of Black Walnut Hills. The larger community census included four steamboat hands, three stewards, and three cooks and a fireman. (A fireman during the industrial revolution of the nineteenth century fed the wood or coal fires that heated the boilers for steam engines.) The deck hands, also called roustabouts, and the fireman were certainly unskilled laborers. Stewards, in charge of the passenger accommodations, cuisine, and service on the boats (rather like butlers on shore) held some of the most prestigious and lucrative jobs in the African American community.

The steamboat trade was also an industry with a long connection to the Black community in Cincinnati. In one city directory in 1842 which included a separate “colored” listing, nearly 20% of African Americans were said to be “following the river” or acting as steamboat stewards or cooks. (As with the white community nearly all the directory listings were for men.) Thus, stewards had often been Black men even before the Civil War. Some in the deep South had been enslaved, though most were either born free or used the lucrative business connections and tips to buy their freedom. The cooks and waiters and porters under their supervision were also frequently Black; many undoubtedly harbored ambitions to move up to steward. A smaller fraction of antebellum deck crews both Northern and Southern were also African American. Before the Civil War, on the lower Mississippi, most of those hands were enslaved men whose labor was leased to the captains. Along the Ohio (where constant connections with the free soil of Illinois, Indiana and Ohio shorelines beckoned the enslaved) Black workers had more often been free. Yet in the antebellum North, about three quarters of deck hands and roustabouts based in both Cincinnati and St. Louis were white, usually German or Irish.

Steamboat stewards had long carried their business to their brethren ashore. The grocer and Black community organizer John I. Gaines got his start as a stevedore on the Cincinnati docks and built his fancy grocery business in the 1840s. While proudly boasting some wealthy white families as customers, Gaines primarily served the stewards on the river with bulk purchases for consumption by passengers and officers. Samuel Wilcox played a similar lucrative role in his own grocery at about the same time. The food from these stores, and similar suppliers up and down the rivers, would be prepared and served by Black cooks and cabin attendants on board the steamboats. Stewards also played supervisory roles in the kitchens, dining rooms and cabins, one of the few occupations with managerial responsibilities. Occasionally Black stewards actually managed white waiters.

Continuing the tradition on the river after the War, more than 8% of the 132 Black males enumerated in Walnut Hills in 1870 worked on the boats. (Walnut Hills, of course, was farther from the river than any other Black population center in Cincinnati.) In addition, some of the daily laborers in the neighborhood undoubtedly worked on the Ohio River docks as stevedores or roustabouts on shore. It is worth remarking that only two white people in Walnut Hills served the steamboat trade. One worked as a River Pilot, a responsible position not available to African Americans; the other, an English-born man, served on the vessels as a cook.

The 1870 census was the high-water mark for steamboat employment in Walnut Hills, and probably in the whole city. It also marked a trend toward nearly all-Black crews on deck as well as in passenger service. In a notable incident in 1866, African American and Irish crews staged a short strike in Cincinnati, marching together a hundred strong and gathering the crews of several boats on the wharf. Yet by 1870 almost three quarters of the deck crews based in both Cincinnati and St. Louis were African American – exactly the opposite of the fraction before the war. By the time of the next census in 1880, traffic was migrating to trains. Passenger service on steamboats became more and more a nostalgic leisure activity, increasingly day tripping on special boats without cargo. Business travelers moved on the rails.

The “enumeration districts” in the later decade were not the same as the Ward boundaries used in 1870 so employment statistics are not completely comparable. Nonetheless, it is clear that steamboat employment was dropping off. There were only four Black men in Walnut Hills on the steamboats – a steward, a cook, a porter and a fireman – but they constituted not quite 2% of the 214 men in this demographic. There were also two Black chambermaids (mother and daughter) from the neighborhood plying the river. Ironically, four white men were on the river in 1880: the Englishman from previous decade along with two of his sons worked in on-board kitchens; a third son of this white cook had landed a job as an engineer. Yet the family constituted well under 1% of the working-age 732 white men in the census tract.