In 1916, the Black-owned Model Drug Company began as a partnership between pharmacists Robert D. Russell and George R. Hicks, Jr., Russell’s wife Rachel, and doctors E. B. Gray and R. P. McClain. All the professional partners received their training outside Cincinnati; only McClain was even native to the city. The new business started with a modest investment of $1,000 from all the partners together – about the same amount as the Black-owned Walnut Hills Pharmacy in 1909. But Model Drug had a more ambitious business plan. At a time when most pharmacies, Black and white, operated single stand-alone stores, Model had two locations from the beginning. For one outlet the partners found a place in Walnut Hills; we shall return to our neighborhood in another post. The company located the other store in the old West End downtown at Fifth and Smith. 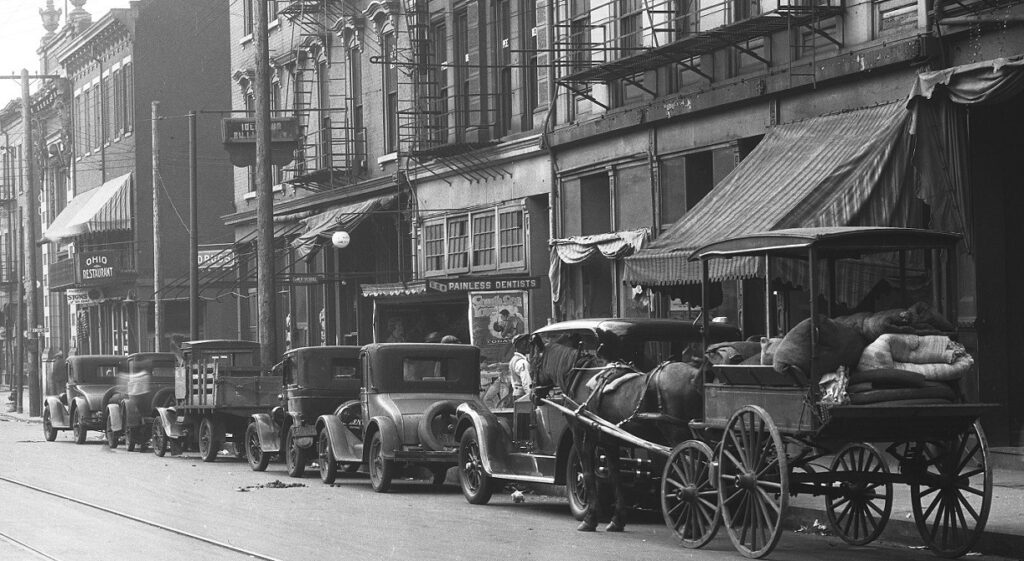 Model Drug would grow to be a significant chain. A third location launched downtown a little farther west on Fifth Street in 1919, and two more in 1921 and 1922. For the sixth store the partners ventured across the river to Covington. Another West End location appeared in 1925. The large number of outlets allowed Model Drug to become a significant economic power in the African American community. As early as 1923, the Black weekly newspaper The Union reported Model Drug “gives employment to more colored men and women than any other business owned by colored people in the city of Cincinnati.” (Not coincidentally, the chain was one of editor Wendell Dabney’s most consistent advertisers, a further contribution to the community around the newspaper.) Dabney reported in his 1926 book Cincinnati’s Colored Citizens that Model had eight stores. R. D. Russell’s obituary would claim the business occupied 14 locations, although that total might double count a few stores that moved.

In 1923 Model Drug reincorporated with $50,000 capital. The chain purchased rather than rented its downtown retail and storage space. The several recorded prices for Real Estate cost alone were in the neighborhood of $10,000, twice as much as most middle-class houses. The business generated wealth as well as income for its investors. Quickly entrenched in Cincinnati’s growing Black business community, the pharmacy concern executed its mortgages and property transactions in the West End through Horace Sudduth, “Cincinnati’s Colored Real Estate Agent.” (Drs. Gray and McClain would return the favor, serving as directors of Sudduth’s Industrial Loan and Savings Company founded in 1919.)

Drug stores in the early twentieth century expanded far beyond the businesses of the nineteenth which included only a pharmacy cabinet and a perhaps a selection of hard candy. Growing stores featured soaps, cosmetics, and hygiene products, a logical extension from the core business of drugs. Beyond health-related products, food service became common in pharmacies during the 1910s. At least some of the Model Drug stores included lunch counters. We have seen that the eleven-store pharmacy chain run by Cincinnatian Cora Dow, a white woman, introduced soda fountains as regular fixtures in her stores by the 1910s. Model Drug, founded just a year after Dow’s premature death in 1915, followed suit. By 1922 the Model Drug chain began to produce its own ice cream; it seems likely that the company-operated horse-drawn delivery wagons served only its own stores. Ice cream along with easily obtained soda water and flavorings like cola syrups transformed the utilitarian stores into social gathering places.

Like Archibald Dickerson’s Black-owned Walnut Hills Pharmacy founded on Chapel Street in 1908, Model Drug cooperated in marketing schemes with large national brands It accepted manufacturer coupons for sample sized products like “Menth-o-eze, a scientific antiseptic cream” and Palmolive shaving cream. Competing further with Dickerson’s store on Chapel, the larger chain carried tickets to African American concerts and rallies and fundraisers. Advertisements in The Union for these events likewise generated revenue for the paper and increased its value as a source of information. In addition to its significant payroll, Model sponsored projects ranging from a movie night for Black youth to a booth at the Black Ninth Street YMCA’s “Commercial Exposition” to a company baseball team.

The buying power of the stores further enabled some entrepreneurs. Model Drug tried out a few products from smaller, local (white) vendors. True Key Mineral Treatment – “our famous MINERAL WATER which is the TRUE KEY for your health” – advertised it was for sale at one West End Model Drug Store, and at the chain’s outlet in Covington in 1921. True Key seems not to have lasted, but the advertisement may be a rare survivor in print among other small lines nurtured by Model Drug. Another venture, the Music Chest company, sold $30 windup Victrolas through Model Drug during the 1921 Christmas season. (Sheet music and race records proved more lasting product lines.) Music Chest, based in Dayton, left only a slightly larger trace than True Key. Both companies offered very generous terms for vendors. I find no evidence of products created by Black entrepreneurs, but very small firms selling limited product lines would be unlikely to advertise.

Considering the difficulties Black doctors had finding surgical and hospital settings in which to practice, the drugstore chain also represented a large, important institution in the African American medical community. Two doctors partnered in the firm from the beginning. It is not clear whether others invested in the reincorporation in 1923, but in 1926 Wendell Dabney referred to a medical association of Black doctors. Dabney commended their progressiveness and noted “their spirit is also indicated by the patronage of the chain of drug stores in which some of them are interested.” We shall see that in the African American medical community, much valuable innovation came in combinations of doctors and druggists.