In about 1874, not long after Walnut Hills sculptor Louis Rebisso had arrived in Cincinnati in 1870, he joined the faculty of the McMicken School of Art and Design. Founded in 1869, the school was then located in an old College building downtown. Rebisso’s long connection with the institution saw: the transition from the McMicken School (a department of the embryonic University of Cincinnati) to the Cincinnati Art Academy (a branch of the Art Museum in our neighborhood), its relocation to a purpose-built home on the Museum grounds, and its emergence as a strong training institution in the city and the American Midwest. Rebisso himself became a leading sculptor and teacher of sculpture in late nineteenth-century America; he served at the Academy until his death in 1899.

We think of the sculptor working stone with a chisel. Yet works in stone usually begin as small clay models. Likewise, Rebisso fashioned his famous bronze sculptures described in other posts first as small studies in clay, then full-size versions in clay, and finally he made plaster molds from the clay mockup for the metal casting. As a teacher, he first took charge of what was called the modeling class at the McMicken School and later at the Art academy. Drawing taught the basics for art in two dimensions, modeling in clay constituted the foundation for work in three. The Walnut Hills Sculptor would have followed a similar curriculum in his native Italy; it was also followed in Munich school, more often credited with influence Cincinnati.

The modeling course was a requirement for graduation by degree students at the McMicken School and later Cincinnati Art Academy. It was also an ancillary class for students of wood carving and pottery. Just as Rebisso brought a sophistication to the large equestrian statue – a previous post contrasts his magnificent portrayal of Civil War General James McPherson to the rather crude sculptures of the previous generation in America – so he also brought a disciplined European system of training to Cincinnati’s diverse students. It was not until 1880 – four years after the installation of his large equestrian statue in Washington DC – that Rebisso’s position was listed as Professor of Sculpture rather than teacher of modeling.

It is one of the conceits of amateurs that they owe nothing to professionals, and especially to professional teachers. Much ink has been spilt (and now, much bandwidth clogged) concerning the intense rivalries and jealousies among the well-off amateur lady practitioners of the decorative arts during Rebisso’s tenure at the McMicken School and the Art Academy, but he is hardly mentioned as an influence. He was in fact an important teacher of both amateur and professional workers in clay and wood in Cincinnati, which we shall take up in another post. Yet we need to look at students a little farther afield for acknowledgement of his significance as a teacher.

Indiana native Janet Scudder studied at the Art Academy of Cincinnati from 1887-1891. “Dear old Professor Rebisso,” Scudder reminisced in her memoire Modeling my Life. “He probably never knew what he meant in my life. And how intently he would watch me work, always criticizing and approving and encouraging in his gentle way.”[1] Starting out as a production woodcarver in Chicago, and then as part of a team of sculptural copyists for the Chicago World’s Fair of 1893, Scudder became a successful sculptor in relief and in the round in her own right. Scudder crossed paths with at least one of Cincinnati’s modeling ladies. The student sensed a bit of condescension as the lady showed her how to create a plaster cast of the clay foot she was modeling, and later when she entertained Rebisso’s student for tea. Scudder’s memoire returned the disdain, suggesting that such amateur ladies often made amateurish art.[2] 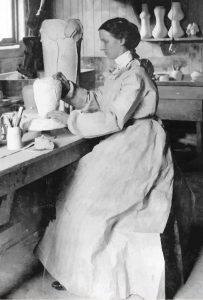 Rookwood Pottery was the famous Cincinnati outlet for decorative and architectural work in clay, yet it was by no means the only midwestern decorative ceramic center.  Mary Chase Perry (later Stratton), a generation younger than Cincinnati’s Louise McLaughlin and Maria Longworth Nichols Storer, founded the Pewabic Pottery which served Detroit much as Rookwood did Cincinnati. Perry began with Art Pottery made from local Michigan clays and newly formulated glazes. Like Rookwood, the Pewabic Pottery also became an important supplier of Art Nouveau and Art Deco architectural tile and fountains. Unlike the stories about the wealthy ladies of Cincinnati, biographical sketches of Perry Stratton always point out that she studied with Rebisso at the Art Academy of Cincinnati in 1887-1889 – the same time that Scudder arrived. In a further contrast to the ladies in Cincinnati, Perry Stratton remained active in the commercial business for decades. In her later years, she established and molded ceramics programs at the University of Michigan and Wayne State University. From an institutional perspective, it must be conceded, she played a more important role than Cincinnati’s potting Divas.[3]

What is important for our purposes is that both of these women, successful professional artists, credited Rebisso as an important influence on their artistic careers. The amateur ladies of Cincinnati, accustomed to being served by those who earned a living, seemed to have felt no obligation for similar acknowledgement. Yet the modeling teacher, we shall see in another post, had significant direct and indirect influence on Cincinnati’s Arts and Crafts movement.