We have been looking at the Census data from 1870 and 1880 to understand the people who lived on what became Lincoln Avenue in 1877. In 1870, the primary occupation listed for both the Black majority and the white minority of both women and men were the same: most women were listed as “Keeping House” and men as “Daily Laborers.” This post will examine the data on women on Lincoln Avenue in 1870; more will follow on other occupational topics.

Keeping house indicated that a woman devoted her labor to her home and family. We have seen that in 1870 most Black residents had arrived in Walnut Hills from the South, and many of the migrants had arrived during or after the Civil War which lasted from 1861 to 1865. Women who had been enslaved had no previous opportunity to keep house for their families, at least as a primary occupation. Among the 29 Black families living on Lincoln Avenue, sixteen included a woman counted as keeping house – or more significantly as not working outside the home for a living. Those sixteen women represented a little more than half the households, and a quarter of the 69 Black adult women on Lincoln. Additionally, three Black women age 15 and older were considered to be “At Home” – neither the female head keeping house nor employed outside the home; two more were “At School.” This means that twenty-one Black women, a third of the total, did not need outside employment to help support the household.

By contrast, the 19 white families, with 51 adult women, also included 16 with a woman keeping house: that number represented a much higher percentage of both households (85%) and individuals (nearly a third) than their Black neighbors. Ten of the sixteen households with a woman keeping house had property, ranging in value from $125 to $7000. Moreover, two of the white women keeping house had live-in white domestic servants. The smaller population of white women also included a proportionate 2 at home and 1 in school. 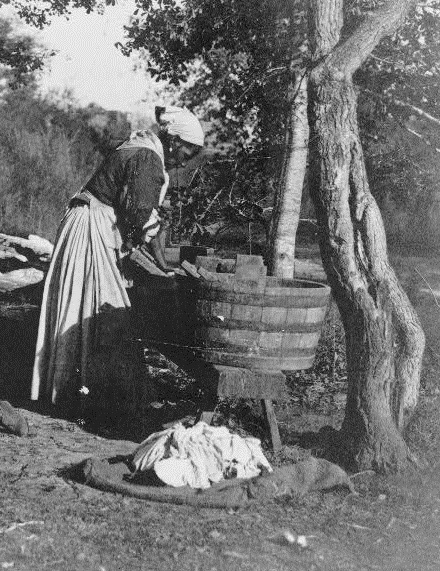 The biggest racial difference among women came in the number of “Washerwomen”: 13 Black women on Lincoln Avenue (nearly 1 in 5) earned a living that way, but only 1 white. Of course, washerwomen were also generally keeping house: the amount of time spent washing may have varied greatly from one household to another. We should also note that the two young white live-in domestic servants, as well as two Black domestic servants living on Lincoln but presumably working elsewhere during the days, would also have done laundry. Rounding out the women in service, one Black woman worked as a chambermaid on a steamboat.

Eleven washerwomen lived in households with no real estate or personal assets. Yet washing was not exclusively the occupation of the poor. The lone white woman doing laundry, Mary Howes, lived with her husband, a baker with $700 of real property; the couple had two sons including a 12-year-old at school. Two Black Washerwomen lived in households with real estate valued at $3500 and $4000. Indeed, Amelia Butler owned real estate valued at $3000 herself while here husband Peter, a plasterer, had real estate worth $1000. It is likely that they owned their home and that at least one of them (and maybe both) owned business real estate as well. This raises the question of just how the laundry business was organized in the decades of reconstruction, and how many washerwomen might in fact have been employers rather than employees. We shall look into this question in another post.

Otherwise, one white woman on Lincoln worked as a seamstress. Three others (all 18 years old, from different households) worked in the shoe industry. Two served as binders, sewing the leather uppers to the soles, and a third with an unspecified position in a shoe factory. Steady if heavy work in an important industry, it placed these women solidly in the working class (as were the men in their households).

We saw in the previous posts in this series that the Black and white populations on what would become Lincoln Avenue had a great deal in common. This occupational analysis indicates that Black women had comparable lives to white women on the street. Noticeably more Black women worked as washerwomen, but there were also white women in domestic service and trades. And it is likely that at least a few of the washerwomen might be seen as management rather than labor in the industry. The half of Black households with women keeping house compared economically and demographically with white women similarly classified.