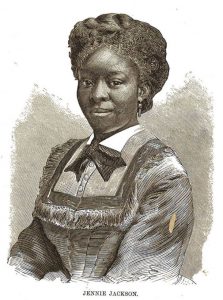 Jennie Jackson sang in the original Fish Jubilee Singers beginning in 1871. In 1885 she married the Nashville preacher Andrew J. DeHart, and the couple promptly returned to DeHart’s hometown of Cincinnati. Jennie Jackson Dehart continued her concert career with variations on the Jubilee Singers as her husband took over as principal at the Colored School in Walnut Hills, renamed Frederick Douglass under his leadership. Jennie DeHart also offered private voice lessons from their Walnut Hills home.

Born in 1852 in Tennessee, Jennie Jackson’s childhood illustrates the precarious existence of free Blacks in the South. Her grandfather had been the enslaved body servant of President Andrew Jackson. Her mother, born enslaved, was freed in a deathbed manumission so Jennie was born free. Yet the trustees of the estate sought to destroy the family’s free papers; her mother fled to Nashville with three-year-old Jennie. Before the Civil war, as a young child, Jennie went to work as a nurse. Toward the end of the war she returned to her mother’s household in Nashville, working side by side doing laundry.

After the war, General Clinton Fisk of the Freedman’s Bureau and the American Missionary Association (AMA) started a school in Nashville that would be named the Fisk Free Colored School, later Fisk University. From its beginnings in 1866, Jennie Jackson sporadically enrolled as her fortunes allowed; a position in the household of the treasurer George White stabilized her status. White also led a school choir. He taught the students classical European music in four-part harmony; the students privately sang spirituals and other songs from their enslavement. Another young African American woman from Tennessee named Ella Sheppard, purchased by her father who had purchased his own freedom, had spent some years as a child in Cincinnati. She attended school in the Queen City and had some private piano and voice lessons. Ella found her way back to Nashville, and as a teenager became the first Black faculty member at Fisk, teaching music. Jennie took the music classes and joined the choir.

In 1871 both Fisk and the AMA were pretty much out of money. White determined to take some singers from his choir on a fund-raising tour; Jennie Jackson joined Ella Sheppard and about ten other students. Sheppard and Jackson, twenty and nineteen respectively, were the senior women in the “band;” the two other girls were fourteen. In addition to the classical repertoire, White had Ella Sheppard arrange some of the Black music the students sang on their own, setting it in tight four-part harmony. Jennie Jackson was reputed to have the best voice in the troupe.

The tour began in Cincinnati where the singers enjoyed some popular and critical support but could not even meet their expenses. White, embarrassed by the failures, renamed the singers after the old testament year of Jubilee. As they journeyed further afield, in order to loosen audience purses they gave a benefit concert for the victims of the great Chicago Fire. A concert the next night brought in a larger audience, with proceeds benefiting Fisk. White worked as an advance man scouting venues; Sheppard increasingly directed the choir and ran its day-to-day operations. As the Fisk Jubilee Singers traveled farther North, through Oberlin, and east to New York, they became more and more successful as fundraisers. Henry Ward Beecher, onetime Lane Seminary student and a famous Brooklyn preacher, opened his church as a concert venue. The nine singers entertained an audience of 2,500. The financial success and wide publicity opened the way for ever more popular swings through New England and Washington DC. This first concert tour netted the tremendous sum of $20,000 – enough to pay the debts of Fisk (and, it seems, of the AMA) and to provide $14,000 toward the construction of a new building, Jubilee Hall.

Jennie Jackson remained with the Fisk Jubilee Singers through their British and European tours in 1877: they performed for Queen Victoria and to packed houses in London, Paris and Berlin. The 1880 census in Tennessee still listed her occupation as “Jubilee Singer.” Even after her marriage and move to Cincinnati she traveled as a Jubilee Singer during the summers. Through the later 1880’s and 1890 she generally had the first billing in newspaper announcements of their concerts.

Jennie Jackson died in Walnut Hills in 1910, the year after her husband.