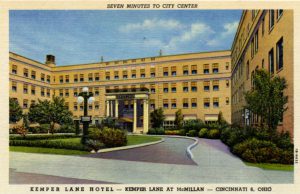 The Kemper Lane Hotel, at the corner of McMillan, provided a somewhat fewer and less expensive accommodations compared to the Hotel Alms a few block east on McMillan, but still very nice and socially acceptable accommodations. It tried to compete with the Alms in the private party, restaurant and dance businesses as well. During the decade before the newest Alms building went up in 1925, the Kemper Lane offered competitive services. It called itself am apartment hotel, with residential as well as transient rooms and suites, just like the Alms. Moreover, it included a row of retail shops along McMillan, convenient for hotel patrons, but invisible from the stately courtyard. 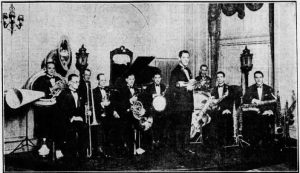 The Kemper Lane advertised “A Carnival of Merriment,” Saturday evening dinner dances in 1924, perhaps its most shining moment in the high-class hotel world of Walnut Hills.  The full-page spread assured potential patrons, “These occasions will be purely informal, but with the absence of any undesirable elements to mar the pleasure of those attending.” It seems that, like the Alms, the Kemper Lane served only white patrons.

The inaugural event featured the Chubb-Steinberg Recording Orchestra, a ten-piece jazz band pictured in hardly informal black tie featuring not only brass and clarinet, but a violin, a banjo, drums and a paperboard megaphone – the latter presumably foregone in the recording studio. The full ad page included plugs for the music store that provided the “band instruments and saxophones” for the orchestra, their favored record shop, their tuxedos, shoes, shirts and furnishings, and even Town Taxi, with cabs at the hotel entrance at all times. 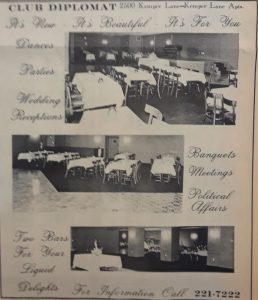 In stark and fascinating contrast, we might consider another large display ad, published in 1974 in the Harold, a Black newspaper. By this time the building billed itself as “Kemper Lane Apartments;” although another ad kept the name hotel. The ad announced the opening of the remodeled “Club Diplomat.” The ad showed a white-tablecloth dining room with a large stage boasting a grand piano: “It’s New. It’s Beautiful. It’s for you.” By this time, Walnut Hills was a mostly middle-class Black neighborhood. We can only presume the stage now featured black jazz bands, entertaining the desirable elements of the neighborhood who could afford a night on the town. The real competition for that desirable audience was now located on Lincoln Avenue – especially in the Manse Hotel.

On the Kemper Lane Hotel as a rival to the Alms, see, for example, the “Social Activities of Great Cincinnati” Column, The Cincinnati Enquirer (Cincinnati, Ohio) 20 Dec 1936, Sun Page 71 and 75 (section 5 p 5 and 9). The Kemper Lane, the Alms and the Vernon Manor all feature prominently as venues for the Christmas social season. See also the 1943 Cincinnati: A Guide to the Queen City and Its Neighbors pp 543-544.