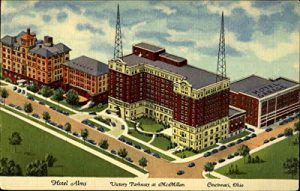 The “new” Alms Hotel in 1925, with its 400-car enclosed parking garage, and its orientation toward the planned Victory Parkway, embraced the full integration of the automobile into American Society. It also provided electric fans in every room – not requiring the customary nickel to turn on. It boasted a third, even newer technology: broadcast radio. The older hotel building had in fact hosted a more amateur set-up a few years earlier, but the new building represented the ultimate in modern technology. Sponsored by the Kodel Radio Corporation – boasting the call letters WKRC – the station included twin towers broadcast, still prominent on the roof, along with the (unlighted) neon sign bearing the name of the hotel and the call letters of the station. An “operating room” with a 1000-watt transmitter shared space on the roof. 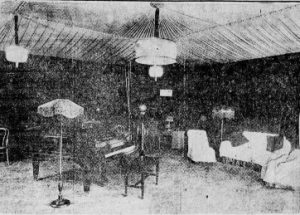 Half of the first floor of the new building – prime space in the sprawling hotel – hosted the station’s studios. Glass-enclosed booths allowed guests and visitors to watch the broadcasts; at the time, all the programming from the Alms was live.  An early Enquirer report seemed to prefer “flesh and blood talent” to the “canned music” of the phonograph and the “automatic piano.” The Hotel also set up a ball room as a broadcasting space for larger orchestras and big bands.

WKRC officially went “On Air” April 6, 1925. Before the end of the month the station hired a male duet called the “harmony coaxers” billed as singers of jazz and ballad numbers every Wednesday night at 9:30 pm. By the end of the summer, the station had a Monday night lineup covered in the Enquirer’s “Studio News”:

“Five Jazz bands over a single broadcasting station during a single evening’s entertainment ordinarily calls for a lot of applause and is ordinarily heralded as a big event; but at WKRC, the Kodel station in the Hotel Alms, this feature is offered by studio Director Eugene Mittendorf every Monday night as regular part of the WKRC program. Alvin Roehr’s Music Makers go on at 6 o’clock for a dinner-hour program: the Keefer-Kocher Orchestra follows at 8 o’clock for an hour: then comes the American Legion Gloom Chasers, with Marion McKay’s Orchestra adding to this remarkable program, and at midnight Wesley Alvey’s [sic] Troubadours from the Valley Inn go on the air for an hour. The offering of five popular orchestras in a single evening at any station in the country is an event worthy of mention, but to Mittendorf it is just a part of WKRC’s determination to present none but superior programs.”

Alvin Roehr’s band cut a number of 78’s, and there is a picture of the white, six-member band standing in front of the Alms floating around the internet. The midnight band, Wesley Helvey’s Troubadours which the reporter misspelled, was a black band that featured Bill Coleman on trumpet and Jack Higginbotham on trombone.

A full half-page spread includes the picture of the “Main Studio” and lots of information about the facility, staff and business arrangements; The Cincinnati Enquirer (Cincinnati, Ohio) 20 Sep 1925, Sun, Page 81 (Section 6 p. 2)

For the quote on the Monday lineup of five jazz bands, see The Cincinnati Enquirer (Cincinnati, Ohio) 30 Aug 1925, Sun Page 109