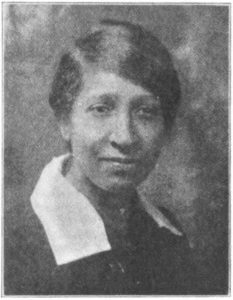 Irene Kirke, an African American woman, was born in 1887 in what was then the small town of Milford, outside of Cincinnati. She attended public school in Cincinnati. (It isn’t clear whether the family moved, or she boarded in the city.) She went on to attend Wilberforce University, the first Black College in the US. Wilberforce had been founded by the A. M. E. Church in 1856, in a town given the same name just west of Dayton, and educated many Black students from Cincinnati, elsewhere in Ohio, and early on all over the country.

Kirke was on the cusp of a generational change. During Reconstruction, many young, well-educated Black women and men both from the Gaines High School in Cincinnati’s West End, and from Wilberforce, went to teach in Freedman’s Schools in the South. By the Progressive Era, the tide had turned. Well-educated graduates of Historically Black Colleges and Universities in the South came North to find jobs based on their newly acquired skills. Kirke first travelled to help in educational and financial institutions for her people struggling in the Jim Crow South. After half-a-dozen years she joined the Great Migration north and returned to Cincinnati.

Kirke studied accounting at Wilberforce. In about 1909 she moved to the Kowaliga Academy and Industrial Institute in Alabama as secretary to the president. She took several other positions a year or two at a time as a bookkeeper or cashier in Alabama, Virginia, and Georgia. She worked both in African American Colleges and a successful Black Building and Loan. E. C. Brown was an African American businessman from Philadelphia who invested in real estate and banks in Newport News and Norfolk Virginia beginning in 1909. Kirke worked in the Norfolk office. (In addition to those Virginia operations Brown would set up businesses with a partner in Philadelphia to provide housing and banking services to migrants to that city from around 1915.)

Irene Kirke returned to Cincinnati in 1915, and went to work as the manager in the real estate office of Horace Sudduth, Cincinnati’s leading Black businessperson from about 1910. Kirke was active in the real estate market on her own account, buying, selling, and financing home purchases in the Black community. Moreover, she came to the real estate office with experience in in Brown’s Savings Bank in Norfolk, Virginia. She bought a house around 1915 in O’Bryonville, the little settlement on Madison Road at Grandin Road, just east of Walnut Hills. O’Bryonville had a history of Black residents and homeowners. Kirke’s mother and three siblings all moved into the house on Freeland Avenue, today in the shadow of the Grandin House. 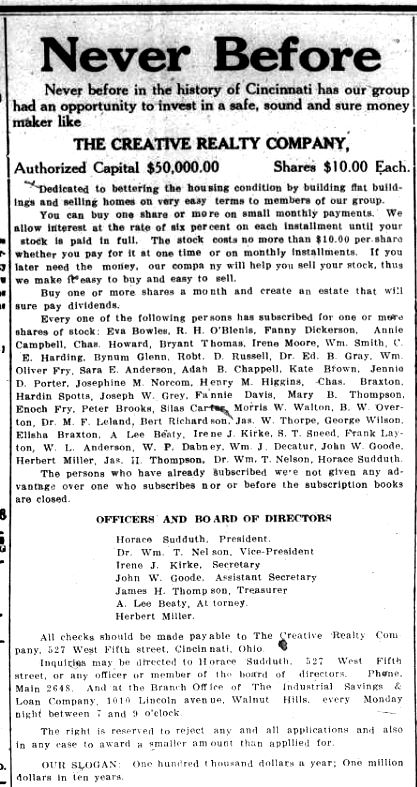 An earlier post described the Industrial Building and Loan Corporation founded by Horace Sudduth in 1919. To be sure Sudduth provided and raised the capital for the Industrial Building and Loan in the West End, and he served as its president. Yet banking was a complex industry; Sudduth required the legal assistance of attorney A. Lee Bailey; Kirke’s experience with Brown’s bank in Norfolk must also have helped. In 1922 she passed an examination to become the first Black woman Notary Public in Ohio. With that credential she officially became the secretary of the Building and Loan, an official officer of the company. Kirke also served as the secretary of other businesses headed by Sudduth. The Creative Realty Company served as an investment vehicle for folk in the Black community. Individuals could buy stock for just $10, and even that modest share price could be paid on installment. Not a regulated Building and Loan, the company did entail risk of losses, but it was able to provide mortgages on more than just private homes. We have already seen that Creative Realty financed the purchase of the Federation of Colored Women’s Clubs House at 1010 Chapel.

Kirke, like Sudduth, also provided her organizational expertise and financial sophistication to the betterment of her community. She was a “captain” in the fund drive to pay off $2500 of debt on the YMCA building, and she was a member of the (women’s) Walnut Hills Industrial Club that met at the Blue Triangle Club in that building. Two decades later, she lent her expertise in the aftermath of the 1937 flood. Black editor Horace Dabney’s newspaper The Union noted:
“Cumminsville, with its large number of small property owners has been, with us, the greatest sufferer. Many homes have been swept away. Many old families there have been ruined.
“The thousands flooded in the West End are largely people resents here for only a few years.
“Quite a number of volunteer workers. Mrs. D. Huffman has been busy at Stowe School. Miss Irene Kirke was a most efficient inspector. There have been many rumors concerning flood sufferers which have no foundation in fact.”

It is of course impossible to know exactly what Irene Kirke’s role as a manager and officer was in decision-making at Industrial Building and Loan or Creative Realty or yet another Sudduth-led business called the Walnut Hills Enterprise Co. We might expect that it was substantial.

– Geoff Sutton
You might also be interested in our story on Pauline Allen Strayhorne, manager of the Major Federal Savings and Loan that merged with Industrial Building and Loan.