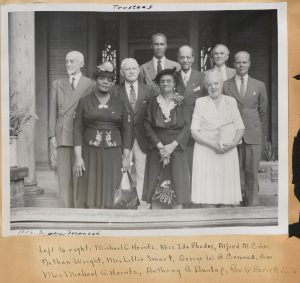 Ida Mae Rhodes is at left in the front row

Ida Mae Rhodes was born in 1899 and lived until 2000 – 101 years. She went to the University of Cincinnati; most records show her graduating in 1919. Yet the university bulletin for 1919-1920 shows her as a junior, and in 1920 she became the president of the first African American sorority on the campus. It’s not clear whether her degree in education was a second bachelor’s, or a masters.

In 1922 Ida Mae Rhodes began teaching at the Frederick Douglass School in Walnut Hills. Miss Rhodes reminisced many years later about the sense of community at the school, and about the strict discipline policies. She remembered that the school board ordered a change from the rattan switch to the paddle as the preferred tool of discipline, but also that the children were generally well-behaved, polite and obedient. More effective than any corporal punishment was the parental disapproval that followed at home. “The next day the pupils came to school as quiet as little angels.”

Miss Rhodes lived in the West End downtown from the time she studied at UC until the mid-1930’s. She moved to an apartment on Ashland Ave in Walnut Hills in 1938, just a few blocks from Douglass. She was devoted to the school, her students and her neighborhood. It was Ida Rhodes who founded the Frederick Douglass alumni association, an organization which through the mid 2010’s met regularly at the school, and which still greets the students on opening day each fall. The alumni association encouraged students to go on to finish high school and offered scholarships to college. One such award carried Ida Mae Rhodes’ name into the 1990’s.

In the early 1940’s Ida Mae Rhodes, along with fellow Douglass teacher Sadie Samuels, played a leading role in raising money to save a Walnut Hills landmark, the Harriet Beecher Stowe house. The fundraising was spearheaded by the African American community, with the goal of saving the house as a shrine to Negro History. Rhodes donated at least $100 out of her savings as a teacher; at least three other Cincinnati Public School teachers did so as well. Both the Frederick Douglass School and the Frederick Douglass Colony Schools, along with the African-American Harriet Beecher Stowe and Jackson Schools downtown, pitched in as Institutional Donors. Rhodes served as one of the original trustees of the Stowe House; in the picture in front of the house she is at the left in the front row.

Her service and influence lasted long after she retired from Douglass. In 1992, “Ida Mae Rhodes, a 93-year-old former Cincinnati Public Schools teacher, won the Ethelrie Harper Award … at the annual meeting of the Cincinnati Human Relations Commission.” In 1999, Rhodes, the oldest living African American alumna at the University of Cincinnati, participated by video conference in a symposium to remember African American students from the first half of the twentieth century.