We have explored Horace Sudduth’s support for the African American YMCA that opened on Ninth Street in 1916. This post will look at a series of institutions for women Sudduth helped in one way or another in the 1910s and 1920s. Many of these connections came in the course of his real estate practice; it is impossible to know to what extent his role was strictly business, to what extent it was philanthropic, or even to know if is appropriate to distinguish between Sudduth’s business and his concern for the needs of the Black community. 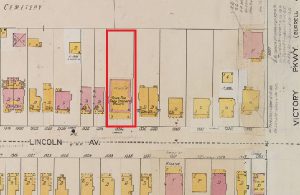 One transaction we have already seen in a recent post on tenement housing in Walnut Hills. Sudduth arranged the sale of the Wheatley Flat Building in late 1918 or early 1919. It was a modern development, no more than ten or fifteen years old; the 20-room building was divided into 8 apartments. Sudduth arranged the sale to the Progressive Benefit Society for Old Women – a classic name for an African American charitable organization. The buyers operated their purchase as a Home for Aged Colored Women.

A second transaction in early 1919 involved another institution for Black women. In the March 1 issue of the Black newspaper The Union, the “Sudduth Still Selling” column announced, “our real estate agent has sold … [a] twelve-room house at 704 West Eighth street to D. B. Meacham who has acquired the property for the Colored Girls’ Young Women’s Christian Association. The ladies in charge hope to open the building and begin their work within the next thirty days.” Mr. Meacham served as the president of the Cincinnati YMCA; Mrs. Meacham had played a crucial role in the funding for the Black branch on Ninth Street where Sudduth served as the head of the board of management for thirty years. The Black YWCA, also known as the Blue Triangle Club, was just one block south and one block west of the Ninth Street YMCA completed in 1916 under Sudduth’s leadership.

The YWCA offered boarding accommodations, and it served as important center for both social services in the West End and meetings of more middle-class organizations. A short piece in The Union newspaper in 1922 gives a sense of the place:

“Blue Triangle Branch YWCA Notes
“The Blue Triangle Business Girls’ Club will be in charge of the vesper services Sunday …
“The Walnut Hills Industrial Circle will hold its monthly business meeting and club supper, Monday …
“The national Health Unit finished their work here last Friday…
“A class in recreational activities and corrective exercise was held at the Y … Don’t grow old, Join this class!
“A first aid class for girls will be held Wednesday … and for grown-ups Friday …
“The following captains have been announced in the campaign for securing the $2500 on the debt incurred in the purchasing the property …
“Friday Miss Chrytabel Loos, recently returned from China, will speak to the members of the High School Club on Girl Life in China.” 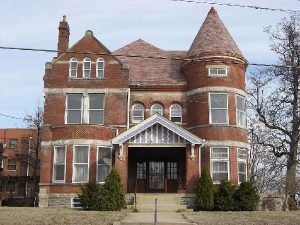 A third transaction came a few years later. In 1925, Sudduth facilitated the purchase of a large, elegant house at 1010 Chapel Street for the Cincinnati Federation of Colored Women’s Clubs. Like the YWCA, the Club House provided rooms on the upper floors for single Black women, most often travelers from the South during the Great Migration. To this day the grand first floor serves as a social and meeting space. The purchase was financed through yet another Sudduth investment vehicle called the Creative Realty Company.

For more information on the Federation, see Cincinnati Federation of Colored Women’s Clubs