When Horace and Melvina Sudduth moved to Cincinnati in 1910, they settled in the West End downtown. The last of the wealthy neighborhoods in the city basin, it followed a pattern of the nineteenth century: after a generation or two, the white elite abandoned it. (They moved to the first suburbs in Mt. Auburn, Walnut Hills, Clifton, and Avondale.) Sudduth opened an office in the old basin neighborhood and set about establishing himself as “Cincinnati’s Colored Real Estate Agent.” He was just 25 years old when he laid claim to that title. To a certain extent, we must see Sudduth’s business practices through the lens of his background as a Kentuckian and a Pullman Porter. The dignified if deferential demeanor, the command of the passenger’s needs and immense competence in meeting them on the railroad, would serve him well as a real estate agent to the white community. And like the porters on the trains, he had a steady stream of side hustles as well.

Sudduth took his first display ad in the William Cincinnati Directory in 1913, introducing himself as a “Negro Real Estate Agent.” Perhaps concerned that even this “N” word was too militant, he toned it down to “Colored” the next year and left it that way for decades. To white Cincinnatians he presented himself as something of a real estate ambassador to the Black community. In the early years, his business seems to have primarily offered services to real estate investors. His listing in the directories throughout the 1910s declared under his company name in the heaviest available font: “SUDDUTH HORACE & CO., Cincinnati Colored Real Estate Agents; Rent Collections a Specialty; Resident Property Leased; Loans Negotiated; List Your Property With Us.” Owners could (for a fee) allow him to buffer them from their Black tenants. Sudduth would solicit and screen renters in the declining neighborhood; he would manage the leases; he would do the collections; he would arrange buying and selling and financing.

In newspapers, too, he marketed the same services to white customers. Sudduth’s 1916 ads in the Cincinnati Commercial Tribune read “Established 1910. Cincinnati Colored Real Estate Agent. Horace Sudduth & Co. 516 W. Court St. Rent Collections a specialty. Houses sold. Resident property listed.” In the Enquirer the same year he advertised “I have ready Buyers for houses and lots in all locations. Tenement houses leased. Rents Collected. Horace Sudduth, Cincinnati’s Colored Real Estate Agent. 516 W. Court St. Established 1910.” The directory and regular newspaper advertisements represented modern business practice in the 1910s. Both ads ran regularly; he was in the game and made himself known. (We will see in another post that he took a different approach to advertising in Black publisher Wendell Dabney’s Union newspaper.) 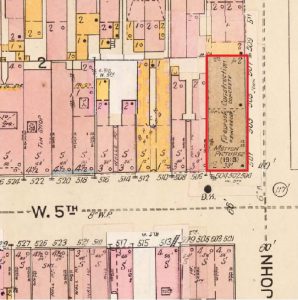 From quite early in his career, Sudduth diversified. Sudduth bought and sold property on his own account, filing and cancelling mortgages, litigating liens, and (more than once) showing up on the delinquent tax rolls. Beginning in 1915 he also served as vice president of the Home Building & Improvement Company. H. S. Dunbar, the first executive director of the Black Ninth Street YMCA, acted the company’s secretary; its president William T. Nelson, MD, was a key leader in the West End Black community. Judging only by the name, the company probably did some sort of construction contracting. The Building and Improvement company apparently petered out after about three years, and I have no information about its success. Most importantly it shows that Sudduth was networking in the Black business community.

And real estate was not his only entrepreneurial endeavor. In 1913, a modern, fireproof concrete theater with mahogany seats and trim opened at Fifth and John in the heart of the Black West End. In 1915 Sudduth leased it with an option to buy. The Lincoln Theater (like the Orpheum near Peebles Corner at about the same time) offered both “High Class Vaudeville and Photoplays” as it advertised in Dabney’s Union newspaper. Sudduth was an entrepreneur in the thoroughly modern movie business. And he kept up with the times. Indeed, during the flu pandemic of 1918-1919, the Lincoln Theater advertised “Two scientific cooling systems in operation. Always a place to go.” (It is likely that many of his patrons also wore the gauze masks already in 1918 understood to slow the spread of the new virus.) 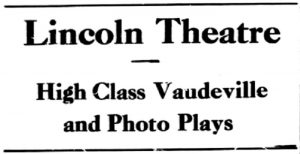 Yet vaudeville especially, and silent movies as well, were often seen as risqué by the dignified elite. Sudduth found other ways to bring the Black middle class into the building: he offered free lunchtime cultural and Race lectures. There was even a series of religious lectures accompanied by Black church choirs – one was reported under the headline “Women Teaching Men Respect Due to Sex” – and some free religious films. In this side business we see a perfect of example of the way Sudduth operated. On the one hand he provided a desirable service to the community. On the other he understood such programming would make both women and men comfortable in his “high class” venue, building an audience for his more commercial offerings.

All the business activity and connections described in this post were undertaken by a man in his twenties, born to poor parents in Covington with a high-school education. We will turn in the next post to some of Sudduth’s other activities in the West End during the 1910s.

Williams Directories are available online from the Public Library of Cincinnati and Hamilton County at https://digital.cincinnatilibrary.org/digital/collection/p16998coll5/search/searchterm/Cincinnati/field/title/mode/all/conn/and/order/search