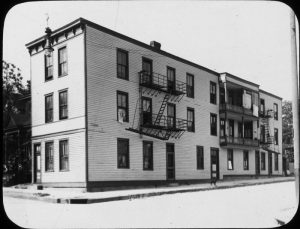 When Horace Sudduth began working in the Walnut Hills market, he played much the same role dealing in and managing tenements as he had downtown. Walnut Hills, too, had buildings, many dating from Reconstruction or even before the Civil War, often with many families sharing entries, hallways and outdoor privies, with only a few rooms for each family. The Enquirer reported in May 1919 “Horace Sudduth, real estate operator in the West End, has arranged … for the purchase of the group of tenement holdings at the west corner of Lincoln and Monfort avenue, Walnut Hills. From a tenement standpoint it is the largest transaction in that part of the city in years. The several buildings contain approximately 90 rooms. Mr. Sudduth takes a 10-year lease with the privilege of purchase at $16,000.” 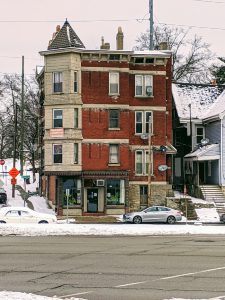 It was his first multi-family deal in the neighborhood, but not his last. By 1921, Wendell Dabney (blurring the line between news and advertising) reported in the Union “Horace Sudduth, our real estate agent, who was the agent in the sale of the Helena, Wheatley and Devote flat buildings, has sold the last remaining flat building in the colored district on Walnut Hills on the northeast corner of Alms Place and Lincoln Avenue, to Francis M. Russel.” There is a lot to unpack in the Union report. Working backwards through the article: Francis M. Russell was the principal at the Douglass School (previously the Elm Street Colored School) and a pillar in the Black community including its business community as well as a landlord. His building at Alms and Lincoln, now isolated by the MLK highway through our neighborhood, still stands with a Black barbershop in its storefront. There remain several flats on each floor. 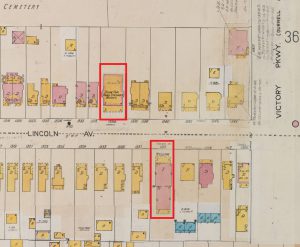 The Wheatley and Helena buildings on Lincoln are now gone, though they appear on detailed maps of Lincoln from the time, on opposite sides of Lincoln a block west of what is now Victory Parkway. 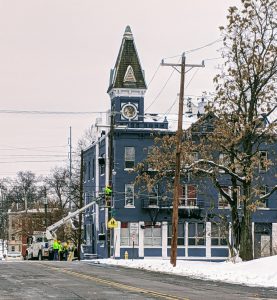 The Devote (or DeVoto) building stood opposite the Frederick Douglass School at Chapel and Alms, two blocks south of Russell’s purchase. The Devote had served as a grocery store owned by generations of a single white family since they built it in 1860; it is not clear whether the upper floors were used for business purposes, or to house the family, or as residential rentals. The Devote, now blue, during our recent wintry weather is obscured by utility repairs, but the flats at Alms on Lincoln are visible behind the truck. The neighborhood was compact and the population was dense.

Dabney’s newspaper report also informs by what it left out. The Black neighborhood, at least in terms of tenement housing, seems not to have included the similar tenement buildings along Park Avenue south of Chapel, or those (some still standing) along Yale and Myrtle between Park and Alms. Those perhaps still served the old Lane Presbyterian Seminary, a primarily white institution that survived through the early 1930s on Gilbert between Chapel and Yale.

A sleepy tenement real estate market in the Walnut Hills “colored district” awoke to the needs of growing population early in the Great Migration, and it was Horace Sudduth who roused it. Folk in the neighborhood are certainly aware that Black Walnut Hills had a high home-ownership rate – we will have a look at that in the next couple of posts about Sudduth’s single-family real estate business. But it is less well understood that the neighborhood also had a long tradition of Black landlords. An earlier series about the Black nineteenth-century coal merchant Robert Gordon, who moved to Walnut Hills just after the Civil War and invested his fortune in Walnut Hills Real Estate, showed that he owned more than 30 rental houses. His daughter Virginia and son-in-law George Jackson retained much of that ownership into the 1910s. Sudduth, beginning in that same decade, became a major player in the multi-family rental business in the neighborhood. African Americans have not only lived in Walnut Hills since before the Civil War; they have owned it.

Cincinnati Enquirer 14 May, 1919, Page 10 on tenements at Lincoln and Monfort

–, May 7, 1921 Page 2, “Our Real Estate Agent,” contains the quote about the Helena, Wheatley and Devote flat buildings