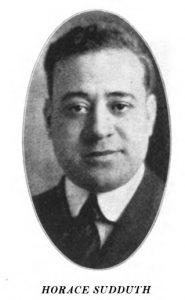 Horace Sudduth served the communities in the West End and Walnut Hills as “our real estate agent”, in the words of Wendell Dabney, the Black editor of The Union newspaper. While he had a finger in every real estate pot beginning in the 1910s (and in many other Black businesses), Sudduth shaped Walnut Hills most prominently with his dealings in owner-occupied single-family residences for African Americans. He and his agents moved hundreds of homeowners into our neighborhood. Many of the buyers financed their purchases through his Industrial Savings and Loan company.

When Sudduth arrived in Cincinnati in 1910, Jim Crow housing practices were in full swing. By custom enforced with the real threat of violence, Black families could not move to white neighborhoods. Yet in many places in the city’s basin – in the east around the old canal covered over with Eggleston Avenue, in the west between the river and about Third Street, and finally farther north in the old West End – there had been small African American clusters since before the Civil War. In Walnut Hills, too, there was a little ante bellum community probably originally providing services to the white neighborhood around Lane Seminary. In 1865 Robert Gordon, a wealthy, self-made African American coal merchant, bought a large home on Elm Street (now Victory Parkway in the block north of McMillan). He also invested heavily in the neighborhood during the Reconstruction era. Gordon established a pattern of Black property ownership; his tenants joined the existing colony of Black residents in Walnut Hills even before inclines and cable-cars turned it into a streetcar suburb in the 1880s. With the Great Migration of southern Blacks to Cincinnati, especially during the 1910s and ‘20s, our suburb was pretty much the only one on the hills around the city basin open to Black home-buyers and renters.

It was not until the late 1910s that Sudduth did much business in Walnut Hills. From 1919 forward, however, we see an increasing number of home sales. Wendell Dabney’s Black newspaper The Union provided a column called “Sudduth Still Selling” that appeared irregularly, usually every couple of months or so. It was separate from the large display ad Sudduth took in every issue and appeared as a news article. Certainly, the detailed information in the column came from Sudduth himself, and probably the full text (a little less bombastic than most of The Union) as well. It is hard to say whether the column was a paid ad, or just a quid pro quo for a loyal advertiser. At any rate, the newspaper included details about the transactions not available in official records. The white Cincinnati Enquirer also frequently published similar short, chatty descriptions of real estate transactions in a column sometimes title “About Town,” replete with mentions of Sudduth, improving on The Union by including the prices of transactions. 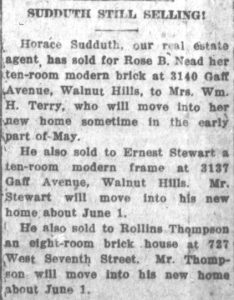 “Horace Sudduth, our real estate agent has sold for Rose B. Nead her ten-room modern brick at 3140 Gaff Avenue, Walnut Hills, to Mrs. Wm. H. Terry, who will move into her new home sometime in the early part of May.

“He also sold to Ernest Stewart a ten-room modern frame at 3137 Gaff Avenue, Walnut Hills. Mr. Stewart will move into his new home about June 1.

“He also sold to Rollins Thompson an eight-room brick house at 727 West Seventh Street. Mr. Thompson will move into his new home about June 1.”

Typically for Sudduth by the late 1910s, there were more single-family sales in Walnut Hills than in the West End. These Walnut Hills homes were described as modern, while the one in the West End was not. Over time, many in both neighborhoods were and were not listed as modern; the description had genuine meaning, probably including things like indoor plumbing, hot and cold water, and electric lights. 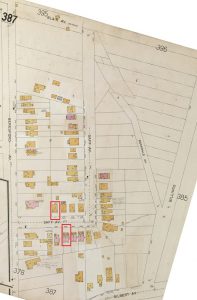 This short report quoted includes a few more subtle things worth noting. Mrs. William Terry, Mozella by first name, will enter our story again as the proprietor of a rooming house that later became the core of Sudduth’s Manse Hotel. Gaff Avenue where she and Mr. Stewart moved in 1919 – a short street perpendicular and then parallel to Beresford and Blair – fit into what passed for the street grid in the northern-most part of Walnut Hills at the time. It was an area of Walnut Hills very much still under development, as evidenced in the frequent updates with new buildings to the Sanborn fire insurance maps. It was an area that, apart from its racial makeup, would have been called “advancing” in the parlance of the federal Home Owners’ Loan Corporation (HOLC) fifteen years later.