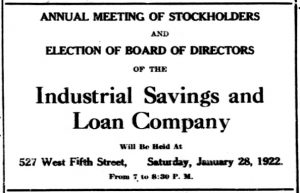 Horace Sudduth founded the Industrial Building and Loan Corporation in December 1919. Its main office was in Sudduth’s West End real estate office, but from the beginning it also operated out of his Walnut Hills office at 1012 Lincoln Avenue, just across Monfort from the tenements Sudduth had acquired some months earlier. Initially the hours in Walnut Hills were only 7 to 9 in the evening on Monday nights. The Industrial Building and Loan offered African Americans in the West End and Walnut Hills a place to save, a source of mortgage loans, and just as important a source of information and financial literacy during the Great Migration of poor, agricultural Blacks from the South.

Building and Loan (or Savings and Loan) societies had more in common with mutual aid organizations (like the Colored Railway Employees’ Beneficial Association founded a decade earlier by Walnut Hills resident Robert Augustus Fowler) than they did with banks. They were owned by the savers. Technically members bought shares; Industrial charged $100 for those shares but they could be financed, interest free, if the buyer agreed to pay at least 25 cents a week. The organization paid 4% dividends on the paid portion of the shares. Additional deposits earned 5%, standard at the time. Members could take loans, almost always for homes, for 6% annual interest.

Sudduth served as President of the financial institution, but he accepted only a dollar a year in salary. To be sure, as a real estate agent he benefitted since the financial institution allowed his African American clients to save for and finance the purchase of a home. But he also wrote into the articles of incorporation that officers could not take loans from the institution, an unusual provision. That is to say, Sudduth didn’t make any money from the building and loan he founded and ran! Over and over we see him as a very successful person in business willing to make financial sacrifices for the betterment of his community.

By July 24, 1920, Wendell Dabney could declare in a headline in The Union “Building and Loan Association a Success.” Though only 6 months old, Industrial Savings & Loan had 217 depositors and $4,000 mortgage loans. “Every person who intends to own their home should become a depositor of this association, which will help them to buy property when they have a sufficient amount save to make a first payment. Every race loyal person who owns their home should become a depositing member by opening a savings account, thereby doing their bit in making this worthy effort a big success.” And a big success it became.

Most of the major events surrounding the Industrial Savings and Loan, with slight variations of the name, appeared in The Union newspaper as either news items or advertisements. An ad that announced of the January 31, 1920 opening appeared in The Union, February 14, 1920 Page 4. A story “Building and Loan Association a Success,” July 24, 1920, Page 1. A display ad, “Financial Statement, Industrial Laon & Savings for the fiscal year ending January 22, 1921”, March 12, 1921, Page 1. A display ad, “Start the new year with a savings account in The Industrial Savings and Loan Co.,”, December 31, 1921. The display ad “Annual Meeting of Stockholders” shown on this page, February 4, 1922 Page 3.  For official documentation see “Building and Loan Associations that filed first reports during fiscal year ending June 30, 1921,” Thirty-first Annual Report of the Superintendent of Division of Building and Loan Associations of the State of Ohio, Springfield, 1921, p. xx [sic], and the report on p 363; also, the routine report in ibid., 1922, p 198.