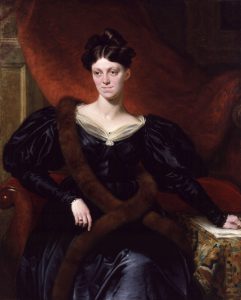 The British author Harriet Martineau made a two-year tour of the United States, visiting Cincinnati for a few weeks beginning June 16, 1834. She published her Retrospect of Western Travel in 1838, including a full chapter about the city. Among the contacts during her first day she met “Miss [Catherine] Beecher, daughter of the Rev. Dr. Beecher, head of Lane Seminary, near Cincinnati … Miss Beecher is a lady eminent for her learning and talents, and for her zeal for education.” A few days later she accompanied a doctor on his rounds: “The doctor had at present a patient in Dr. Beecher’s house, so we returned by the Theological seminary. Dr. Beecher and his daughters were not home. We met them on the road in their cart, the ladies returning from their school in the city, and we spent an evening there the next week.” Martineau then did Walnut Hills proud, remarking about the view from what is now Gilbert Avenue,
From this Montgomery road there is a view of the city and surrounding country which defies description. It was of that melting beauty which dims the eyes and fills the heart – that magical combination of all elements – of hill, wood, lawn, river, with a picturesque city steeped in evening sunshine, the impression of which can never be lost nor ever communicated.

Martineau had made her reputation as a popularizer of and commentator on British Liberal Economic thought. Her twelve short volumes of Illustrations of Political Economy set out the theories of Adam Smith, James Mill, David Ricardo and Thomas Malthus – a series that for many years outsold Charles Dickens! Martineau followed her elegiac passage on the view from Walnut Hills with an amusing economic reflection on the descent from Walnut Hills into hog hell:
We soon entered a somewhat different scene, passing the slaughter-houses on Deer Creek, the place where more thousands of hogs in a year than I dare specify are destined to breath their last. Deer Creek, pretty as its name is, is little more than the channel through which their blood runs away. The division of labor is brought to as much perfection in these slaughter-houses as in the pin-factories of Birmingham. So I was told. … These slaughter-houses are divided into apartments communicating with each other: one man drives into one pen or chamber the reluctant hogs, to be knocked on the head by another whose mallet is forever going. A third sticks throats, after which they are conveyed by some clever device to the cutting-up room, and thence to pickling, and thence to the packing and branding, a set of agents being employed for every operation. The exportation of pickled pork from Cincinnati is enormous.