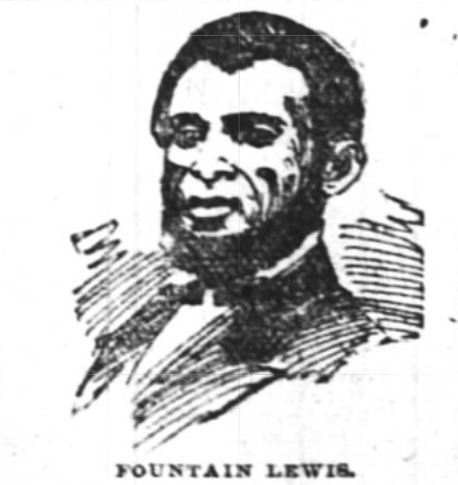 In the previous post we met the Black barber Fountain Lewis, Sr. who was active in Cincinnati for more than half a century from the early 1840s. That piece considered Lewis’s interactions with white political figures and great political struggles on the national scene before the Civil War. This one will look at his own more local political action, especially in the years after the War, and at his connection with the Walnut Hills neighborhood.

Fountain Lewis moved in the same African American social and political circles as Robert Gordon, Robert Harlan, Hartwell Parham, and Peter Clark in antebellum Cincinnati. Lewis was with Gordon a pillar of the Black Union Baptist Church near Lewis’ home in the West End. What is striking about both Lewis and Gordon, especially in the decade before and the one after the Civil War, is how ordinary their solidly middle-class lives were. A wonderful blog post by the Friends of Music Hall, linked below, details how Lewis played a role in the leadership of the community of Barbers in Cincinnati, speaking out in the 1840s for a day of rest and religious observance on Sunday for all who plied the profession, Black and white together. More than 40 years later, he was leading his Black colleagues in an afternoon’s (segregated) celebration of the profession in the great Industrial Exhibition at Music Hall.

Fountain Lewis never sought elective office, but he did participate in politics from Emancipation through the heady years of Reconstruction and into the early days of Jim Crow. A solid Republican, he disdained the so-called “Liberal” faction of the party who in 1872 held a renegade convention in Cincinnati and backed Horace Greeley over Grant. Among the many Republican Clubs named for popular Blacks or for progressive white candidates, Lewis was associated with a Grant Club, a John I. Gaines club (after the antebellum Black grocer and moving force behind the Cincinnati Colored Public Schools), a Ruffin Club (for the first Black Harvard-trained lawyer and elected official in Boston and Massachusetts) and the Young Men’s Blaine Club (after the radical Maine senator who lost out to dark horse Rutherford Hayes at the full Republican convention of 1876, also held in Ohio). Fountain Lewis Sr. and his son Fountain Lewis Jr. made their way to Washington in 1889 to celebrate the inauguration of Republican Benjamin Harrison. They also both attended large Republican events (sometimes as minor functionaries) in Cincinnati’s Music Hall.

He would have known most of the itinerant rising Black political figures who passed through Cincinnati – John Mercer Langston boarded and worked in the Black barber shop run by William Watson during Lewis’ early years in Cincinnati; George Washington Williams first came to Cincinnati in 1876 to pastor the Union Baptist Church. Peter Clark, the most prominent Black politician of Lewis’ generation, worked briefly in his father Michael’s shop before turning to education and politics. Black coal dealer turned real estate investor Robert Gordon shared membership in Union Baptist Church with Lewis. Gordon was named as the executor of the will of John Crawford, a white businessman who left his valuable estate to support a home for Old Colored Men. In the legal wrangling by white folks who claimed priority, Gordon and the court established a sort of foundation to administer the estate and the home; Lewis joined Gordon as a trustee.

Fountain Lewis Sr.’s connection to Walnut Hills for most of his life came only by association: many of the Black leaders in the City settled in Walnut Hills at one point or another in their careers. Lewis appears as a frequent guest at weddings and parties in the city and “on the hill” in the Black social and gossip columns “Our Colored Citizens” and “Items on the Wing” carried in several Cincinnati papers in the 1880s and 1890s. A firmer claim on the neighborhood came in 1892 when the septuagenarian widowed barber married the widow of coal dealer William West. William and Lucetta West had their home on May Street, a few blocks south of McMillan. West was one of two partners who took over Robert Gordon’s coal business when the latter retired to Walnut Hills to invest in real estate. We have seen in other posts that Gordon’s last development project was a two-story brick building at the corner of Kenton and Morgan, a block east of May. By the time of Lewis’s second marriage, the east side of May Street was a collection of “Negro Tenements,” while the Wests lived in what appears from the maps to be a duplex on the other side of the block. Lucetta West took Fountain Lewis into her household on Walnut Hills after their wedding.

The house, like so many others in the neighborhood, has been demolished.