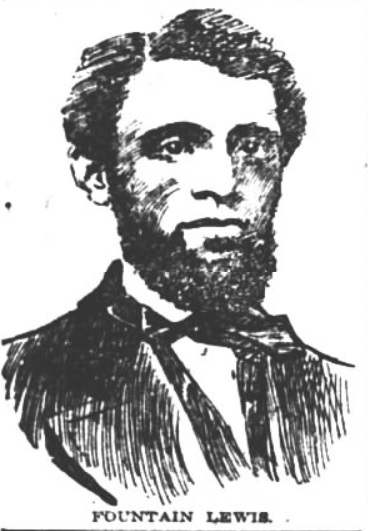 The Friends of Music Hall posted a wonderful blog entry on Fountain Lewis, Sr., a Black barber active in Cincinnati from the early 1840s until his death more than half a century later. The occasion for the post is that Lewis, who tended the hair of the Music Hall’s major donor Reuben Springer, himself contributed $20 toward the huge performance and exhibition space. We in Walnut Hills can also make a claim on Lewis since he moved to our neighborhood for the last few years of his life. This post adds a slightly more political perspective on his career.

Fountain Lewis, born free near Frankfurt Kentucky in 1820, was of the generation that established itself in Cincinnati before the Civil War and lived to see Emancipation, the end of the War, Reconstruction, and the beginnings of Jim Crow. He took up the “tonsorial profession” in Cincinnati in the early 1840’s and fifty years later remembered serving a largely white and wealthy clientele in those days. Barbering was one of very few professions where an African American could make a decent living; like butlering and catering and chauffeuring it provided a legitimate service to white families with money. He reminisced that it was not unheard of to receive a dollar for a tip, a great deal of money in the 1840s when only the most exclusive shops could charge a quarter for a shave and a haircut. As a barber, Fountain Lewis played a relatively invisible role in the lives of his white clients who sat waiting in his elegant shop for a turn in his “High Plush Chair.” Hearing their conversations, he would have known a great deal more about thoughts and plans of the powerful in the city than they would have known about him.

When the white community wanted to understand their Black neighbors, Lewis became a common source of contact. As the Music Hall blog points out, in 1878 Springer not only tapped Lewis for a donation for the great cultural monument but had the contribution of “the colored barber” pointed out in Julius Dexter’s speech at the opening celebration. Similarly, when the body of Salmon P. Chase, who died in 1873, was reinterred in Cincinnati in 1886, a newspaper reported sought out Fountain Lewis for his recollections of the long-time Cincinnati politician. Chase had risen to become governor and senator, then Abraham Lincoln’s Secretary of the Treasury, and Chief Justice of the Supreme Court. Lewis looked back to his own memories of Chase as a Cincinnati lawyer before his elevation to state and national offices. He modestly acknowledged that Chase had shaved himself every morning and therefore had little use of the barber’s services, though he said he had sometimes cut the hair of the Chase children. More significantly, Lewis called out the significance of the arguments Chase made in the legal battle against the apprehension of fugitive slaves in Ohio. Chase’s arguments in the cases of a woman known only as Matilda (before Fountain Lewis arrived in Cincinnati), and of Samuel Wilson, whose steamboat transport docked at the Cincinnati landing in 1845, established the principle that an enslaved person brought by their enslaver to the free state of Ohio became free. Fountain Lewis was a life-long member and lay leader of Union Baptist Church; he recalled Union’s ceremony in May 1845 when the “Colored People of Cincinnati” presented an inscribed silver pitcher to Chase recognizing his defense of people arrested as fugitives. “It was not very popular to take such views on abolition as Mr. Chase did. Cincinnati was always a pro-slavery place, on account of business considerations and such things.”

Ironically, on a couple of occasions, Fountain Lewis also claimed with pride that he had attended to the coiffure of Kentucky Senator Henry Clay. Clay was on the opposite side of the Ohio River, and of the slavery question, from Chase. The “Great Compromiser” had brought Missouri into the Union as a slave state in 1820; in 1850, his last compromise imposed the harsh new Fugitive Slave Act that greatly weakened any protections that Chase’s legal reasoning had provided in Ohio. Chase, in the Senate at the time, voted against all five bills of the compromise.

Fountain Lewis himself ran afoul of the delicate legal balance between the free soil of Ohio and the slave Commonwealth of Kentucky. Lewis had been a free man in Kentucky and had become a prosperous citizen of Cincinnati in the 1840s. After the bills of 1850, the foundations of relations between the North and the South shifted, and Lewis’s situation changed. In 1856, he crossed over to Covington to cash a check on the Farmer’s Bank of Kentucky, a businessman conducting a routine matter of business. As he attempted to return, he was arrested “and notwithstanding the remonstrances of Mr. Wheeler, a dentist of Cincinnati,” conveyed to jail. The newspaper account continued:
“Mr. Wheeler then applied to [Covington] Mayor Foley, and was told that the law under which the negro was arrested was an old one, but had been discontinued until quite recently, when Kentuckians were obliged to renew it in retaliation of the many injuries which had been heaped upon them by the people of Cincinnati. Upon going with them to the jail Mayor Foley recognized the negro, and upon paying two dollars he was permitted to return.”

It isn’t clear from the newspaper what law was broken, but we might assume that it involved Lewis’ status as a free Black man, perhaps technically undocumented (that is to say, moving about without his free papers) at the time of the arrest. Perhaps the escape of five of Foley’s slaves in 1850 was among the many injuries suffered by Kentuckians. While Fountain Lewis could clearly afford his two-dollar fine, that sum would have proven unattainable for a roust-about on the Cincinnati docks.

Stay tuned here for more on Fountain Lewis, his life in the Black community and its politics, and his move to Walnut Hills. In the meantime, have a look at the blog post at