The Eden Park Reservoir project came during the decade or so after the Civil War, a period generally known as Reconstruction. The construction we have considered through this summer’s posts represented a huge public works project, on a scale unlike anything carried out by the city before the War. While we naively may think of Reconstruction as something the North did for (or to) the South, in fact the North reconstructed itself (and constructed much of the modern West) to a much greater extent than it rebuilt the South.
The Reservoir was a municipal project: The Water Works itself and the City of Cincinnati financed the work. Initial construction from 1867-1871 was paid out of the revenue from “water rents.” The naive projections in the early years had scheduled completion of the first of two reservoir sections by the latter date. As we have seen, that schedule was wildly optimistic. So too was the expectation that the work could be a pay-as-you-go project. 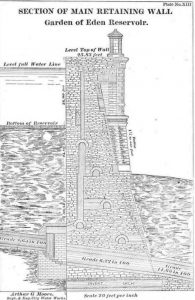 The Water Works turned to the municipal bond market. The 1871 sale of the first $150,000 in bonds was accomplished under existing state law that capped municipal offerings at that amount. In April 1872, former trustee of the Works Henry Kessler convinced the state legislature to pass enabling legislation, so the city could sell up to $300,000 in Water Works bonds, with payments of 7% per annum and payable in full in 25 years. The plan was for the city to pay the annual interest from general funds, while the Water Works would establish a sinking fund from water rents to cover the principal 25 years hence. In 1875 the works offered three additional $100,000 bonds with maturities of 10, 15 and 20 years for a total of another $300,000. All this bonding came to $750,000 in just 4 years.
The Water Works soon found itself in a bind typical of governmental agencies: the City Council set the rate of water rents, and thus controlled revenues. It also negotiated mergers with thirsty suburbs, promising new water mains which caused infrastructure costs to skyrocket. The rates in Cincinnati were among the lowest of any large city in the country; nonetheless, council reduced the unmetered water rents for small consumers 5% in 1875, metered rents for large industrial customers by 20% in 1878 and the unmetered rates by another 10% again in 1879. Meanwhile, in 1870 the city annexed not only Walnut Hills and Mount Auburn, but Price Hill, Camp Washington and Mt Lookout. In 1873 it gobbled up Woodburn (now East Walnut Hills), Cumminsville and Columbia. All these areas needed new mains; Western Hills required a pumping station and tanks like those in Mt. Auburn, and the city’s exploding population (with concomitant industrial growth) required ever more pumping capacity at Front Street.

In classic Reconstruction politics, the bonds became a political football. An 1875 election day article in the Enquirer referred to “the $500,000 thrown away by the late Republican Board of Water-Works by their foolish location of the Eden Park Reservoir.” Another urged
“BRING out every Democratic vote today if you would keep the old Republican ring out or power. It was the old Republican ring Which gave us the Connection Track job, the Gas Company contract, the Eden park Reservoir, the Burnet Woods Job, the Kilgour Engines Job, and the present city debt …”
And a third discounted the reservoir a bit:
“the old Republican regime, … when $25,000 were spent in Council to purchase a Park, and when the Water-Works Board was run by Charlie Kilgour, and $400,000 thrown away upon a reservoir in Eden Park.”

Yet the costs of the Reservoir were underestimated by these critics: even without the ancillary costs of the main influent and effluent pipes, direct material and labor costs for excavation, masonry and the cement liner for the first half of the reservoir alone came to about $850,000 by 1874. Estimates for the completion of the lower reservoir added something approaching another half million, along with $75,000 for the Effluent Pipe Tunnel. The figure of $1.66 million on the image published in 1881 is probably about right. It’s worth noting that only about half that cost came from Water Works Bonds; the rest depended on income from water rents. 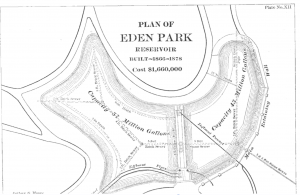 Financial pressures (or at least political perceptions of those pressures) and changing perceptions of municipal responsibility came to a head in 1879. Mayor R. M. Moore lamented the national recession triggered by the collapse of banks in 1873 (owing to excessive speculation) and suggested the sale of many city assets including the Water Works (as well as Eden Park). “There is no reason,” the mayor claimed, “why the city should any more engage in the selling of water than in keeping a grocery, dry goods store, or any other class of business.” While the privatization scheme did not go through, in 1879 the city abandoned its responsibility for paying the interest on the Water Works bonds, dumping that expense on the Water Works! Beginning that year interest payments constituted the largest single operational cost for the Works, at just over a third of expenses. Things got so heated in 1879 that opponents of a new water bond were accused of tampering with ballots; the first court ruling tossed out the ballots from the questionable Ward, but with affidavits and law suits and who knows what else, the ballots came back and the measure failed.
The history of Cincinnati Water Works was by no means unusual during Reconstruction; Pittsburgh, with similar topography, had a parallel story. Half a dozen other large northern cities launched similar large-scale water delivery systems. All suffered the same sorts of contemporary criticisms. Reactions to expensive, progressive policies in the North was certainly of a piece with the reactionary responses to the progressive policies introduced during Black Reconstruction in the South. The strong emphasis on corruption (which was certainly significant in Cincinnati as elsewhere) came to tar the Grant administration and Southern legislatures much more viciously than it did the Civil War heroes who ran the Republican party in Cincinnati and most of the rest of the North, or the Robber Barons of the Gilded Age. This separation of similar things reflects a larger distortion of our national memory of Reconstruction.