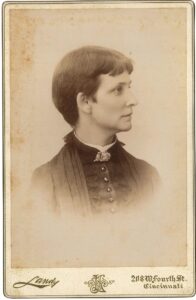 Elmira Young Howard earned her MD at the New York Medical College for Women in 1870. She migrated to Cincinnati that year and opened a practice for “Diseases of Women and Children.” She moved her office the around in the city, always downtown. The Census of 1880 did not know exactly what to make of her, listing her occupation as “Doctress.” In 1883 Dr. Howard bought a house at the northeast corner of Kemper Lane and Windsor Street in Walnut Hills. She stayed in Walnut Hills through about 1890; she continued to practice, living in her office building downtown, until her retirement in about 1895. Dr. Howard was the first to arrive in Cincinnati, but she paved the way for a large cohort of graduates from women’s medical colleges, mostly on the East Coast. During the 1880s she prepared and mentored the first Black woman MD in the city, Consuelo Clark.

Elmira Young was born in Richland County in north central Ohio in 1841. In her late teens she married Jerome Howard, an art teacher in the New York State Normal School in Albany some 20 years her senior. Within five years, the couple had two sons, and a daughter with a disability. Jerome enlisted in the Union Army late in the Civil War and died in the notorious Andersonville Confederate Prison in 1864. A war widow with three young children, Elmira’s prospects seemed limited. Yet her parents were people of some means; to better care for her daughter Elmira determined to become a doctor. In about 1868 she enrolled in the New York Medical College for Women.

The medical school in New York had been founded by two sisters who had grown up in Walnut Hills. Elizabeth and Emily Blackwell both left Cincinnati to study medicine, earning the first and third MDs awarded to women in the US. Neither of them returned to the Queen City. Together they founded a hospital for indigent women and children in New York City in the late 1850s. During the Civil War they trained nurses for the Union Army; with the coming of peace, they opened the Medical College for women. Elmira Howard was one of their first students. Like the Blackwells, after her American MD Dr. Howard would travel to Europe for an additional year of clinical study. 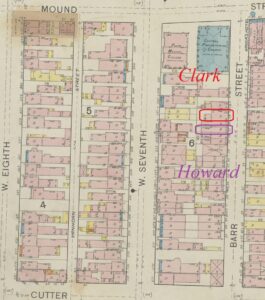 Undoubtedly owing to her Ohio roots and the Blackwell’s connections, Elmira Howard relocated to Cincinnati in 1870. She began her practice in the old West End neighborhood south of Gaines Colored High School. In 1875, significantly, she lived two doors from Gaines’s principal Peter Clark and his family on Barr Street between Mound and Cutter. The Clarks’ three children were about the same age as Dr. Howard’s. It was not a particularly wealthy neighborhood, but a respectable and sophisticated one. In those early, optimistic days of Reconstruction, the families developed a bond strong enough that Dr. Howard invested her time and talent as a preceptor – a short of physician’s life coach – to Consuelo Clark. On Dr. Howard’s recommendation, Consuelo Clark entered a medical school in Boston and earned her own MD, first in her class, in 1883.

By 1880 the Cincinnati Commercial Tribune could report

“The lady physicians of Cincinnati, prominent among whom are Miss Julia Carpenter, MD, Dr. Elmira Howard, Ellen E Kirk, MD and May Howells, MD, are meeting good success in their profession.”

Howard and her colleagues generally maintained offices for private practice. Howard’s last and largest office was at Ninth and Vine; the African American Consuelo Clark practiced at the same address. Yet many of these female physicians, including Howard and Clark, also volunteered at clinics for poor women and children. By the late 1880s she provided leadership for a large clinic, dispensary, or hospital for poor women and children in addition to her private practice. 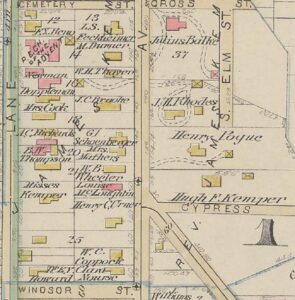 Dr. Howard’s concern for the poor and her connections with the Black middle class by no means disqualified her from membership in the elite of Cincinnati white ladies’ culture. Her home in Walnut Hills, an easy walk from the newly developed Eden Park, shared the block with the old Kemper homestead, occupied by three sisters descended from the founders of Walnut Hills. Behind her house, at Park and Windsor, lived Miss Clara Nourse, head mistress and owner of a prestigious private girls’ school. On a fourth corner of the square, on Park Avenue behind the Kemper place, Louise McLaughlin had her studio and home. The Misses Kemper and Miss McLaughlin moved in an artistic circle of decorative woodcarvers who studied with Benn Pitman; Dr. Howard’s intimacy with the circle is indicated by the fact that she witnessed the will of Pitman’s first wife Jane. Howard further attended the openings of McLaughlin’ Pottery Club exhibits. She also joined Miss Nourse’s Free Kindergarten association, a Who’s Who of Cincinnati ladies presided over by Mrs. Alphonso Taft.

Being a Doctress, it seems, counted as a perfectly lady-like thing to do during the quarter-century after the Civil War.