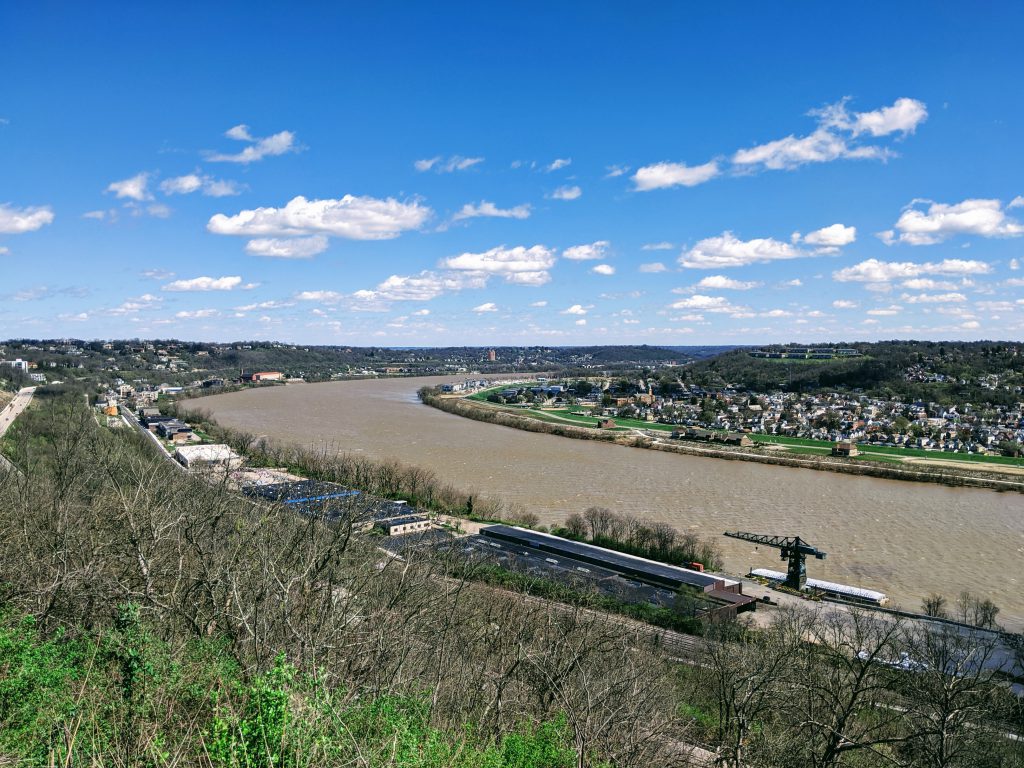 Today there are two snaps from the Spencer Overlook in Ede Park, looking east. One shows a broad expanse of the river valley. The first range of hills is on the Kentucky side with the town of Dayton in the valley. Around the bend is the Ohio side with houses in the Delta Avenue Valley behind the visible sliver of River, and then Columbia-Tusculum At the top of the green hills behind Dayton, visible in the higher resolution photo on our web site, is Alms Park. The Park is a memorial to Walnut Hills resident Frederick Alms, donated by his widow Eleanora C. Unzicker Alms. It appears today as a “Bald Hill” – the name Columbia settlers gave it in the 1790s when the Indians cleared it to keep an eye on new Caucasians in the neighborhood. Behind that prominence the Little Miami flows into the Ohio; the final ridge, obscured by haze even on this clear day, rises above the banks of that tributary.

The other picture shows the bluffs of what is now called East Walnut Hills. Highrise apartments stand mostly at the ends of the cul-de-sacs off McMillan, where large old estates remained intact long enough to be purchased by developers in the last third of the twentieth century. From the left we see the Edgecliff Apartments, completed in 1966 on land below the (mostly stable) fill used to create Victory Parkway in the 1910s. Next is Edgecliff Point built in 1990 on land previously occupied by the old Emery mansion, called “Edgecliffe,” which served as the main building of Edgecliff College. Xavier cashed in on what amounted to a dowry in its merger with the little women’s college. Proceeding right in the photo we come to the Riverview Terrace, between Ingleside and Salutarius on land once controlled by Bishop Purcell in the mid-nineteenth century and used as a retreat for the Xavier faculty. (Xavier College and Seminary remained downtown at the time.) The mostly obscured red brick Ingleside is across the street. The yellow brick Husman House, on McMillan where it tops the bluffs was completed in 1964. The Edgecliff, the Riverview, the Husman House, along with the Highland Towers in Mt Adams and the Madison House on Madison Road, all appeared in a December 1962 Sunday Enquirer story with the lead “Cincinnati’s ever changing skyline is undergoing yet another change in the form of an impressive array of high rise and luxury apartment buildings, one of the newest trends in urban living.”