The Water Works in Eden Park served as the testing site for one of the most important innovations in water treatment during the progressive era.  George Warren Fuller, one of the founders of modern sanitary water treatment, did tests just below the Eden Park Reservoir, developing the exiting new technique of “Rapid Sand Filtration.” The experiments took place in 1898-1899.

To put things in order, Cincinnati finally determined in 1896 to build a new water intake facility on the land it had acquired back in 1872 in the suburb California. The 25-year delay at least ended at a propitious time. Cincinnati retained the services of George Fuller to design a filtration system for the proposed plant. Fuller had graduated from MIT in 1890. Perhaps more importantly he travelled to Germany after graduation to study the Berlin Water Works, and bacteriology at the University of Berlin. On his return to the states, Fuller designed a traditional, slow sand filtration system, following the model of English plants of the same sort, for Lawrence, Massachusetts. As in many installations in England, the large, oozing bed of sand removed practically all the dirty particles, and practically all the bacteria, from the water it treated. That plant significantly reduced deaths from typhus in Lawrence.

Fuller next won a contract to design a system for Louisville Kentucky, 1895-1897.  The water of the Ohio River at both Louisville and Cincinnati posed a greater challenge than the “clear but polluted waters … of the Merrimac River.” The technical term for the problem in the Ohio was “turbidity”; in common language, mud. The mud, which included lots of clay, would require impossibly large beds of sand for English style filtration. Fuller’s experiments at Louisville compared the feasibility and efficiency of half a dozen methods of filtration available commercially or already tested in laboratories. Some now seem a little fanciful – sparks and magnets, for example, were always considered solutions to technical problems in the later nineteenth century.

The method Fuller liked best he called “rapid sand filtration,” or the “American” method to contrast it with large, slow filters pioneered in England and replicated in Lawrence. The key innovation involved mixing settled water with a chemical, alum or aluminum sulfate, before filtration. The alum caused the “turbidity” – the tiny bits of dirt – to clump or “coagulate” in the water. Running this treated water through a thin sand filter caught the alum and the clumped dirt; the filtered water emerged with considerably more than 95% of the turbidity, and the bacteria, caught in the sand. The filters got dirty and clogged very quickly, but forcing a small amount of filtered water backwards carried the dirt up out of the sand; the dirty water could be skimmed and discarded.

Despite the successful testing, Louisville put off construction of a filtration plant. In 1898, Fuller came a few miles up the Ohio River to Cincinnati. He set up his laboratory in Walnut Hills. The Louisville tests had determined the appropriate method of filtration involving coagulation; the Cincinnati lab aimed at perfecting and scaling up the technique. Fuller carried out extensive testing through nearly a full year, enough time to go through seasonal temperature changes, varying river levels and all parts of rainfall cycles. He ran filtration tests through different grades of locally available sands. He tested water with varying amounts of added aluminum sulfate, and some tests without any of the coagulant at all. Fuller’s experiments showed that simple filtration sufficed to clean the water under most circumstances. He considered recommending a system where chemical treatment would be used only when required. Careful calculations of costs indicated that it would be more economical to treat all the water all the time than to build two sorts of filters. The test station also performed experiments on cleaning the muck from the rapid sand filters. Simple in principle, this process involved stirring and raking mechanisms to separate the coagulated dirt from the sand.

As Fuller’s own tests grew to a close, he was contracted to further study the effects of treating water with “quicklime,” calcium oxide. His experiments in Louisville had seemed to show that there was enough lime in the river water to neutralize the slightly acidic aluminum sulfate. Yet Fuller’s new report concluded that quicklime aided coagulation, and helped soften the water, removing impurities likely to cause scale in boiler systems used for steam engines and for heat. Yet he expressed concerns that excess lime in the delivered water might cause problems for the lead pipes used to deliver water to most homes.

A report of the completed works in 1910 noted, “At the time that the experimental work was being carried on, people in general had very little faith in the use of a coagulant. In fact, many believed that it would be a case of committing suicide by slow degrees to drink water in which Sulphate of Alumina or any other Chemical had been used; consequently great pressure was brought to bear on the Board of Water Commissioners and their engineer in order that some means would be provided with pure water and still not be subject to the fear of death by slow poisoning.” Fuller’s carefully documented experiments nonetheless carried the day. It’s not clear how the problem of excess lime was solved, but the plant completed in California in 1906 by 1910 used both iron sulfate and slaked lime. 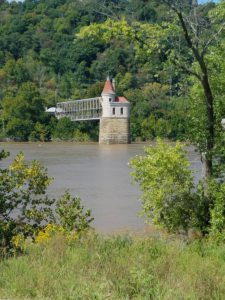 Eden Park remained the city’s main reservoir. Instead of pumping raw river water to Walnut Hills, however, the water was first pumped from the river at California, from an intake on the Kentucky side. It was raised about 150 feet to a settling pond – much larger than the Eden Park reservoir, but playing the same purification role that the Eden Park reservoir had served in the 1870’s. That water, with the thickest mud left on the floor and floating debris skimmed from the top – but still turbid and bacteria-laden – then mixed with coagulating slaked lime and iron sulfate (a replacement for aluminum sulfate). This solution ran through one or another of 19 rapid sand filtration ponds which were alternately used as filters and cleaned. The filtered water ran into another holding reservoir at California, still high enough to force the water through ten miles of pipes to Eastern Avenue. From a huge new pumping station there (still in use, although with new pumps) it went up Torrance to Walnut Hills, and into the reservoir in Eden Park.

The new filtration plant succeeded admirably in delivering pure, clean, disease-free water to Cincinnati. The cut-over from the old Front Street plant occurred in two stages. Over the course of 1907, unfiltered water from the new California plant supplied part and then all the city. In November of 1907, the new filtration system went into operation. In 1906, typhus deaths in Cincinnati numbered 239. In 1907, during the first quarter of the year with the same water source, the death toll exceeded 1906 levels. By the end of 1907, however, even with untreated water from upstream California, the year’s total dropped to 157. In 1908, the first year of filtration, the toll was down to 67; in 1909, only 46 succumbed to typhus. In most of those cases, there was evidence that the victims had recently consumed water from sources other than the Cincinnati Water Works.

Michael J. McGuire, author of The Chlorine Revolution: The History of Water Disinfection and the Fight to Save Lives, wrote the Wikipedia article on Fuller.

Fuller’s report on his plant in Massachusetts appeared in American journal of public health and the Nation’s health, v. 20, 1894, Sand Filtration of Water, With Special Reference to Results Obtained, at Lawrence, Massachusetts pp 61-94.

A dissertation by William Nelson Jones on the Cincinnati Water Works in 1910 presents a detailed description of the plant after a few years in operation. The pre-whiteout typos and corrections remind me to be thankful for word processors.

Cincinnati Industrial Magazine, v 1 No 12, March 1910 has articles on the new Water Works, and on water purification.

The first image comes from Fuller, Cincinnati; the picture of the California intake is recent.