The construction of the Eden Park Reservoir and of the Park itself were so inextricably connected that some accounts referred to the park as the “Water Works Park.” During the near decade-long construction of the of the reservoir and its accompanying pipes and valves and tunnel, it was hard to separate the projects. Roads for the large stone quarry, construction materials, equipment and workers wandered through the park lands. A twenty-foot wide stone carriageway capped the great reservoir wall. Huge volumes of earth, gravel and stone waste moved through and around the park; if some of this movement ended up landscaping the large bowls that became vast lawns, it was hard to tell where the hauling for the water works ended and that for the park began.

The destruction of the lower reservoir in the 1960’s, and the covering of the upper reservoir with a lawn containing mirror lake, has fundamentally altered the terrain. The reservoir completed in the 1870’s served for 90 years as the focal point: from nearly every point in Eden Park, visitors could see the 13-acre lake, dramatically ending only a few feet below the reservoir wall. Behind the fence in the distance, the Kentucky hills floated behind the lake. From early days there was a fountain in the midst of the lake. 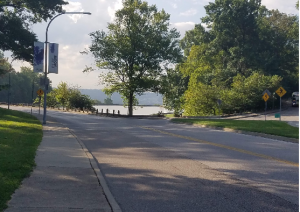 We can still get some small sense of the splendor of that view cresting the hill on the Eden Park Drive entrance from Gilbert Avenue, although only pedestrians have more than a few seconds to enjoy a glimpse of mirror lake from that perspective. Other premier views in the old days came from Fulton Avenue, from the Presidential Grove, and the Cincinnati Art Museum. (That view, now looking over Mirror Lake, might be recovered with a thinning of underbrush on the Park side of the Museum comparable to that on the Gilbert Avenue side.)

The rhetoric surrounding the park in Nicolas Longworth’s old Garden of Eden vineyard from the beginning contained two competing visions. Everyone agreed that the hilltop location provided lots of healthy fresh air, magnificent views of the river and stately grounds. Some touted these advantages for the poor masses huddled in the river basin. Others noted that those masses had no reasonable way of ascending to Walnut Hills. The broad lawns were declared democratic, as anyone could walk on them at any time, although again access to the hilltop was an issue. The smooth, macadamized walkways were open to carriages but closed to delivery wagons and other commercial traffic, something teamsters rightly decried as undemocratic. A short-lived deer park and a lonely captive eagle graced the grounds for a short time in the early 1870’s. The deer park especially was derided as aristocratic. The fences at any rate proved more successful at corralling the deer than keeping the feral dogs out and the dogs rather than democratic sentiments put an end to the menagerie – and served as a cautionary tale for the Cincinnati Zoo just getting underway in Avondale.

On deer park fences and the eagle see The Cincinnati Enquirer (Cincinnati, Ohio), 30 Mar 1874, Page 8.  The deer park was apparently located at the top of a path to effluent pipe street, perhaps near the current Art Museum of Playhouse in the Park. Another post will address the carriageway on top of the reservoir wall.

Rules for the Park were published many places including The Cincinnati Enquirer (Cincinnati, Ohio), 18 Sep 1872, Page 5