Cincinnati came to see itself during the period of Reconstruction as a leading cultural center in what was then called the West. This artistic renaissance came hand in hand with the mercantile and industrial growth of the city. The history of the arts in Eden Park – a spectacular array of conspicuous consumption by both the city and its leading citizens – began with the Park itself, built around the utilitarian reservoir.  The ornamental arches supporting the carriageway along the reservoir wall, and the fanciful Elsinore Gate built around the effluent pipe valving, provided romantic backdrops for the extensive landscaping provided by the Water Works during the decade-long construction of the reservoir. The Cincinnati Art Museum would take its place as the massive jewel in the crown of Walnut Hills.

Another artistic form swept Cincinnati in the years following the Civil War. Owing partly to the role of song among the soldiers in the war, and partly to the strong German tradition of vocal music, especially male choruses, and certainly also to a burgeoning musical instrument business in the city, music found its place nearly everywhere. 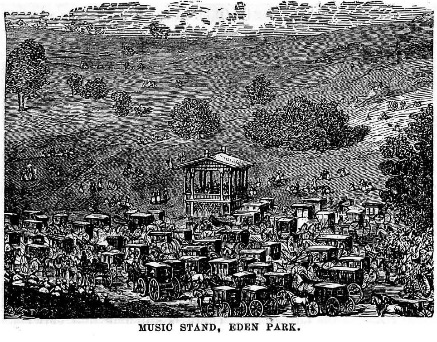 Among the first enduring structures in the repurposed Garden of Eden, the Parks Commission erected a bandstand in 1872. It was located on the western hillside overlooking Fulton Avenue, near its intersection with Eden Park Drive. By 1875 the venue required police-controlled traffic management, asking carriages to pass near the left side of the road. “Those who desire to take station with intention to hear the music will be arranged in compact order in the center or between the side passage-ways.” An engraving from 1877 shows the venue surrounded by congested carriages and listeners who scattered themselves on the hill. It’s worth noting that the stand stood on grassy slopes with a minimum of tress and shrubs, giving the concert bowl a much more open feel than that part of the park today. Similar scenes provide photographic evidence of both the open hillside and the crowded carriages through the end of the nineteenth century, although later photos have a much higher proportion of pedestrian auditors.

The Eden Park Concerts began in a big way in September 1872. The city celebrated its centennial that year with the first of an annual series of Industrial Expositions, touting the city as both a center of manufacturing and a hub for trade. a program by Currier’s Band, featuring a Centennial March (for Cincinnati’s anniversary) and a Verdi overture among the eight selections. A concert in 1877 by the Germania Band included a Rossini overture and selections from Verdi and Rossini among the eight pieces played. 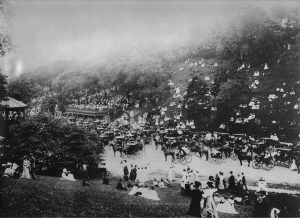 In 1891, Jacob Schmidlapp enlisted the help of Charles Fleischmann, Frederick Alms, and Frank Tuchfarber to pay for 15 free concerts in Eden Park. At the end of the year he offered $50,000 toward an endowment for future concert seasons, on the condition that others put up and additional $25,000. When the fund drive came up short, Schmidlapp made up the deficit. The 1891 season provided 15 concerts, with total attendance of 50,000 to 60,000. Various endowments have paid for summer concerts in Eden Park ever since.

A more substantial bandstand, a little lower down the hill, replaced the original in 1901; a modern comfort station occupies roughly the same position at the traffic circle at the foot of Fulton today. A postcard on the wonderful site Cincinnati Views shows what seems to be a Concert from a small stand near the Eden Park Spring House; the mixture of automobiles and horse-drawn carriages, of ladies and gentlemen on horseback and foot would suggest an early twentieth-century date. 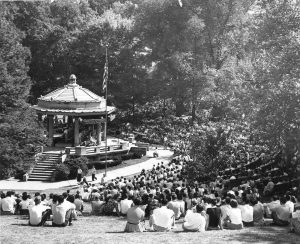 In 1914 a new octagonal bandstand went up in the bowl now occupied by the Seasongood Pavilion and provided the venue for concerts in the park until the Seasongood replaced it in 1960. This photograph is from the 1950’s. All these bandstands provided good sight lines not only for the musicians, but also out over the Reservoir to the Kentucky hills in the background. Each took advantage of the slopes as a natural amphitheater, although the Seasongood Pavilion added acoustically live pillars, side walls and roof.

The first illustration appears in Daniel J. Kenny, Cincinnati illustrated : a pictorial guide to Cincinnati and the suburbs, (1879) available on line from the Cincinnati Public Library.

The second is from CincinnatiViews.net, where there are a number of postcards of each of the band stands.

The third illustration is from “A Glance at the Garden of Eden,” Cincinnati Historical Society Bulletin, Volume 28, No. 2, p. 142-158.

On the 1890 funding by the patrons mentioned, and attendance figures, see The Cincinnati Enquirer (Cincinnati, Ohio) 03 Oct 1891, Page 4.

In 1875, William Groesbeck endowed a concert series at Burnet Woods. See for example The Cincinnati Enquirer (Cincinnati, Ohio) 04 Jun 1875, Page 4. (It seems the endowment was an incentive for the city to buy the property as a park.) It is not clear whether concerts occurred every summer at Eden Park during the late 1870’s and 1880’s. The Highland House built in Mt Adams in the 1880’s had a large open air concert space, and there are stories about people enjoying the concerts there and then strolling to Eden Park.