The first Black-owned Drug Store in Walnut Hills – probably the first in Cincinnati – appeared on Chapel Street in 1908. Named simply the Walnut Hills Pharmacy, it opened with four partners. Archibald Henry Dickerson had a circuitous route to the Queen City. Born in Missouri and raised in Louisville, he moved to Xenia, Ohio to study at Ohio State. Armed with a 1903 pharmacy certificate and a license to practice, it is not clear whether he came to Cincinnati before he joined the Walnut Hills partnership. Black Walnut Hills physicians Norbert C. Vaughan and Louis A. Cornish, who lived and practiced in the neighborhood, also held ownership stakes. Robert G. D. Troy, the only Cincinnati native in the partnership and a graduate of Gaines Colored High School in the old West End, brought business rather than medical expertise to the Pharmacy; he managed the finances for the first year or so. Troy represented the rare Cincinnati African American who could follow his father, a bank messenger, into a position in the Ohio Valley Bank. The fortunate son rose to be a bookkeeper; in 1897 he moved from his position at the bank to assistant bookkeeper of the city of Cincinnati. Troy too lived in Walnut Hills. Each partner put up $350 for the business.

The storefront at 1126 Chapel Street had previously housed a white wall-paper hanger who had his retail space in front and his residence in the rear. Archibald Dickerson, too, would occupy the apartment at the rear of the building. Clearly the previous establishment left no established customer base for the new store. The creation of a pharmacy in the space was a bold move: a white-owned drugstore was located at the other end of the block, on Chapel at Park. That store had been operated by a German proprietor, John Linnemann, from 1880 through 1903; the business continued – in white hands – for another thirty years.

Dickerson’s storefront, on Chapel closer to the Alms Place (formerly Elm Street) end of the block, occupied a physical space in the heart of the Black community in Walnut Hills. The new drug store was across the street from Elm Street Colored Public School, constructed in 1872. Under Black principal A. J. DeHart it had been renamed Frederick Douglass School in the first few years of the twentieth century. When the Walnut Hills Pharmacy opened, construction was just getting started on the magnificent new Frederick Douglass building completed in 1911. Houses were cleared on Chapel next to the old building to make room for the much larger edifice; the old schoolhouse in turn would be torn down to provide a playground for the children.

The African American Community around the segregated Douglass School surely embraced the Black-owned Walnut Hills pharmacy. Receipts in the first eighteen months or so amounted to more than $10,000 with about $1,500 profits – quite a significant return on a combined $1,300 investment by the partners. All indications point to continued prosperous operation for more than a decade. Drs. Vaughan and Cornish, as investors and prescribers, would have provided credibility and customers to the business. Both physicians had graduated from Washington DC’s Howard Medical School in the late 1890s and arrived in Cincinnati by 1900. They lived and practiced Walnut Hills. In 1910, Cornish had his office at the corner of Chapel and Park, just a block east of the drug store, and Vaughan practiced a block south, on Park at Yale. Both doctors were also critics of the white medical establishment’s ignorance of the public health conditions in the African American community, and of the deplorable treatment it grudgingly provided to African Americans. Dr. Cornish indeed published a strong statement to that effect at about the same time he joined the business. 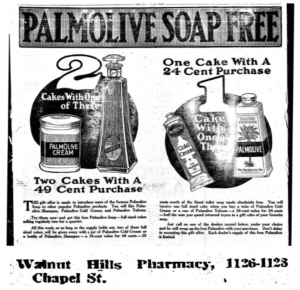 Drug stores in the early twentieth century also purveyed cosmetics and served the booming market for consumer products. The Walnut Hills Pharmacy carried patent medicines like a new preparation from North Carolina in 1913 with “Vapors of Camphor, Eucalyptus” called Vicks Croup and Pneumonia Salve. An up-to-date retailer, Dickerson accepted the company’s coupons for free samples. He participated in a similar campaign for “Calox, the oxygen tooth powder” in 1916, giving away free “child size” packages in exchange for another coupon. In 1918 the store signed on with a promotion for Palmolive, giving a bar or two of their established soap for customers trying out the company’s other consumer products. In 1920 Palmolive launched a new shaving cream – “the final formula, the scientific solution” – and again the drug store on Chapel accepted the company’s coupons for free samples. This is only to say that the business adopted progressive era practices as current as its pharmaceutical supervision.

The Walnut Hills Pharmacy provided the surrounding African American community with more than prescriptions and consumer health products. It also provided a hangout for kids from Frederick Douglass after school. As crucial to the neighborhood, the store consistently carried tickets for events in the Black community – a basketball game at the “Colored” Ninth Street YMCA where the Cincinnati team hosted a team from a Black YMCA in Indianapolis in 1919, or an exhibition broad jump by Walnut Hills native and Michigan track start DeHart Hubbard, staged at the Zoo and benefitting the local NAACP in 1923. (The next summer DeHart went to Paris to win the broad jump and first gold medal earned by an African American athlete.) In a more cultural vein, The Walnut Hills Pharmacy also offered tickets to a benefit concert sponsored by the Black Delta Sigma Theta service sorority in 1922 at Memorial Hall featuring Howard University graduates Roy Tibbs and his wife Lillian Evans. She would go on to a successful operatic career in Europe as Lillian Evanti, during the mid-1920s.