Donald Spencer was born in Cincinnati in 1915. He went to public schools and graduated from Walnut Hills High School in 1932. At Walnut Hills, Donald worked to ensure that African-American students could attend the Junior-Senior Prom. He then went to the University of Cincinnati where he first graduated with a degree in Chemistry in 1936, a second bachelor’s in education in 1937, and a Master of Education in 1940. When he arrived at UC there were no extra-curricular activities open to African American men, so he founded an organization called the Quadres, wrote and directed a musical and performed in the Quadres production of his work.  He was also a founding member of the Kappa Alpha Psi fraternity on the campus in 1939, providing a Greek opportunity for fellow African Americans.

After finishing his education in 1940 he married Marian Spencer. (Marian spent her first year at UC living with her aunt and uncle, who ran Manggrums pharmacy at Park and Chapel, across the street from Douglass School.) He also began an eighteen-year career teaching math in the Cincinnati Public Schools. He started out at Frederick Douglass School in Walnut Hills, and later worked at the Harriet Beecher Stowe School, another school for African-American students, in the West End. 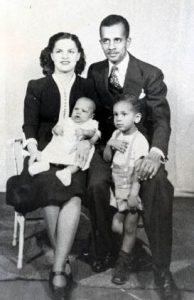 When the Spencers bought their first house in 1944, Donald took notice of the commission earned by the broker. Anxious to try his own hand in the business, he signed on as an agent with Horace Sudduth, an African American who had been in the real estate business since about 1910, and who dominated the market for African-American buyers in Walnut Hills. (Sudduth got his start, and remained dominant, in the West End as well.)  Several listings in beginning 1947 in Walnut Hills, Avondale and the West End showed the realtor as “Donald A. Spencer, with Horace Sudduth;” announcements of sales of both single- and multi-family dwellings in the late forties and early fifties note “Donald Spencer handled the sale for Horace Sudduth, broker.” In 1952, among the real estate listings, we find the announcement that “Donald Spencer is no longer associated with the Horace Sudduth real estate office to buy or sell real estate.” Spencer set out on his own, still teaching math for the Cincinnati Public Schools.

At about the same time, the Spencers made their first significant foray into Civil Rights activism. The Spencer children had reached the age when Coney Island was an object of desire; like Martin Luther King at a similar stage in his family life Donald and Marian had to confront the problem of segregation with their boys. Marion Spencer decided to organize and resist the segregation. She first asked politely over the phone about the park’s policy on admission of Negroes, and then met with lawyers and community members. (Some reports indicate that Donald, fearing repercussions in his job with the Cincinnati Public Schools, was less enthusiastic.) Marion drove her boys to Coney Island, only to be turned away. She always made her trip paired with a white family, to document the discrimination. Other pairs of white and Negro families made the same experiments with the same results. The effort had the backing of the Citizen’s Committee for Human Rights (a local affiliate of the Congress of Racial Equality), the Cincinnati Urban League, and the National Association for the Advancement of Colored People. With their documentation the Spencers joined a lawsuit; they were able to refute spurious arguments from the Park owners that other parties or reasons other than race caused the Negro families to be refused.

Yet the desegregation of Coney Island was not a single summer’s work. Marian Spencer repeated her unsuccessful trips to the park in 1953. The situation was legally complicated; the suit alleged violation of the state public accommodation law. Only until 1954, the year of the supreme court Brown v. Board of Education ruling that ordered the desegregation of public school, the city threatened to withdraw licenses Coney Island required. Yet as late as 1955 the amusement park routinely refused admission to all but white visitors. Even admission to the Park did not end the owners’ resistance. Because the large pool and dance venue at Coney were located across the county line, in Clermont County, it required several more years of litigation to integrate those facilities.

In 1958, two years after the death of Horace Sudduth, Donald Spencer’s real estate business flourished to the extent that he was able to retire from teaching. Yet it was not until 1986 that he joined the Cincinnati Board of Realtors, the first African American so honored. Even then, he deemed it necessary to say that he would not embrace any covert discrimination the board might endorse. A successful developer, he eventually rose to become president of the Board. 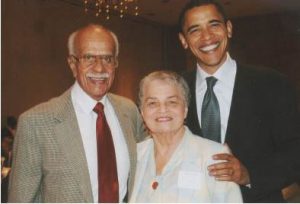 Donald and Marian Spencer worked tirelessly for Civil Rights in Cincinnati, taking on segregation in the public schools in the ‘60’s through the ‘80’s through a magnet school approach. (The schools have since largely resegregated along both racial and economic lines.) Donald Spencer chaired the campaign to fund the Public Schools with a new levy. In 2003 he was active in the campaign to raise a $435 levy to build or rebuild all the school buildings. Perhaps the most discouraging fight came when Donald and Marian Spencer had to sue Ohio’s Secretary of State Kenneth Blackwell and other election officials to prevent them from disfranchising African American voters.

The Douglass School Building from 1980 was refurbished in 2017 to house the new Donald and Marian Spencer Center for Gifted and Exceptional Students.