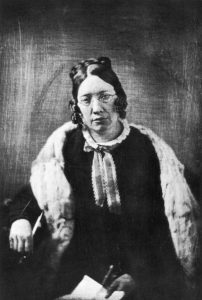 Catherine Beecher moved to Cincinnati with her father and her adult siblings in 1832; the family settled in Walnut Hills. Catherine, 32, had already made a name for herself with her opposition to President Andrew Jackson’s Indian Removal policy.
Catherine recognized that women, denied the right to vote, had no direct influence on legislative behavior. Yet she claimed for herself the First Amendment right to petition the government for a redress of grievances. She printed and sent out a circular letter in 1829, in which she urged:
“Have not then the females of this country some duties devolving upon them in relation to this helpless [Cherokee] race? They [women] are protected from the blinding influence of party spirit, and the aspirates of political violence. They have nothing to do with any struggle for power nor any right to dictate the decisions of those that rule over them. But they may feel for the distressed, they may stretch out the supplicating hand for them, and by their prayers strive to avert the calamities that are impending over them. It may be, that female petitioners can lawfully be heard, even by the highest rulers of our land.”
The campaign did not move President Jackson – Indian Removal ended in the Trail of Tears – but the tactic of recourse to petition was used by African American Cincinnatians in the campaign at the Ohio legislature for public funding for Colored Schools in the 1840’s and ‘50s’.

Catherine Beecher continued her work as a writer and educator after her arrival in Walnut Hills in 1832. She founded the Western Female Institute in the downtown area and ran it with the assistance of her sister Harriett and three teachers who followed Catherine from her school for young ladies in Hartford, Connecticut. The Cincinnati Public Schools, founded in 1829, were struggling, and had no High Schools at the time. Catherine embarked on an ambitious plan to turn her Western Female Institute into a High School “on the college plan” (later known as the “Beecher Plan”) capable of training young women from the East to become teachers she could send out to educate the children of the West. She wrote,
“I then attempted to secure an endowment from a large fund given by a Mr. Hughes for general education. The Trustees agreed to bestow if on the condition that the citizens would provide a suitable building. I then started a subscription, headed by two gentlemen with a thousand dollars each, and several other gentlemen promised five hundred dollars each … The financial crash of 1837 came, the fine building we rented was sold to the Catholics for a nunnery, no other suitable one could be had, and so another of the finest schools I ever knew came to an end for want of endowments, such as then abounded on every side for young men.”
 Circumstances in the West inspired a new direction for Catherine’s energies. Cincinnati boasted eight manufacturers or warehouses selling iron cook stoves by the late 1830’s. Catherine recognized that a shortage of young women available as servants in the West, and the commercial development of household appliances, meant that middle class women needed to run their own households with little help. In response, she created “Domestic Economy,” later known as home economics, and published a popular textbook with contributions from her sister Harriet. Catherine also published several versions of “a course of calisthenic exercises” she developed in her schools in Hartford and Cincinnati, at a time when girls were discouraged from physical exertion.